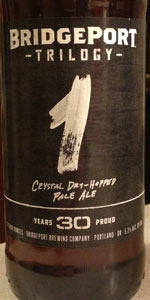 The appearance has a nice golden amber color that comes across semi-transparent allowing a delicate carbonation to be seen rising. There’s a one finger white foamy head that levels out and leaves some nice adequate lacing sticking finely to the sides of the glass. The smell has a nice sweet malt base coming through over top of some bitter citra hops. For the most part, I like it. The taste is mainly sweet through the malts as the hops tend to take somewhat of a backseat here. There’s a super dry somewhat malty aftertaste that leads to a dry bitter finish. On the palate, this one sits about a light to medium in body and has a semi-decent sessionability surrounding it. Overall, I say this was a pretty good beer worthy of having again.

Pours with medium silky and lasting head. Aroma is mostly citrus (grapefruit), taste is sharp and mildly sweet, tangy like grapefruit, overall mouthfeel seems kind of watery, but not too noticeable due to the excellent and tart taste. Hoppy for a pale ale, but delicious.

This beer has a very fruity aroma, like apricots, but a crisp hoppy taste. This is one of few beers I have had in a while that really made me raise my eyebrow and want to buy again rather than just keep trying new beers.

Apparently, this beer is retired? I just got it in a mixed case with a sixer of 3 other selections from Bridgeport. So, maybe its old. Or, maybe they're brewing it again?
Anyhow, not too impressive, and I really like Bridgeport's offerings.

Looks like a watered down guiness. Smell, is pleasant sweet apricot hoppy. Moderate carbination, but lacking mouth feel. Glad I tried it, not sure if I'd get it again.

The smell is tea-like, herbal, citric.

It is smooth and easy to drink. Not too thin.

For as many hops that were used it is a very balanced beer. A solid APA.

Poured 12oz bottle into pint glass. Smooth and sessionable for an APA. Mild head and good lacing. Would like to try on draft; would buy again in bottle. Hoppy but not overpowering. Very solid Pale Ale.

Nice, appropriately hoppy aroma. Flavor follows but is stronger, with a bolder hop presence and enough sweet malts to temper the bitterness. At least average hop presence for an APA with mild bitterness.

O: Excellent for style; get one while you can. I look forward to the remaining 2 pieces of the trilogy.

Pours into a nonic a dull honey tinged golden with a nice sticky full one finger white head that leaves two broken rings of lace as it settles slowly into a frothy mass.Caramel/biscuit malt mainly stands out in the nose with light leafy hops,dry-hopped maybe but lightly hopped at that.Flavors have almost and English flare to them with biscuit malts and leafy hops the main flavor profile although it does get sweet after awhile.The body needs a little beefing up and the flavor does as well,for a 30th anniversary trilogy Bridgeport leaves a little desired for their first of the trifecta.

This is a medium amber-colored beer with a big but very quickly fading head of airy foam. The nose offers pleasant notes of citrus hops, with a touch of sweet malt. The taste is fully of citrus hop flavor, to a nearly unpleasant degree. There's little to balance it out. Malt is barely present. It's really not a strong enough beer to carry off the flavor and aroma hops, in the same way some recent "session IPAs" have fallen short.

Just not a very drinkable beer. Fortunately, it's a one-off that will never appear again.

12 oz. bottle, with no apparent bottled on date present. My first new beer from Bridgeport in quite sometime. The first in their trilogy of 30th anniversary beers. Acquired as part of a mixed six pack at the local Binny's.

M - The feel is crisp and clean, medium-light bodied with mild carbonation. Grapefruit & pine resins lingering on the aftertaste.

Overall, I found it to be a very enjoyable offering. Simple in it's approach, but a solid example of the style. I'd be interested to try the other two beers in this series.

Appearance - burnt orange color that you would hope to see with some decent amount of head.

Smell - sweet hop aroma all over this one. interesting smell

Taste - definitely a unique hop flavor to this one. at first it is sweet and then just a little overwhelming for me.

Mouthfeel - nice and smooth, but still an interesting flavor to end the beer. nothing special

Had this on cask at the brewery in Portland.

Probably one of the best English style bitters that I've had outside of London. Having it on cask brought out the strengths of the beer nicely, I think.

An imperial pint of this went down like buttah, as we say in Boston.

The Trilogy No. 1 Pale Ale from Bridgeport is decent and quite sessionable. The beer poured a slightly hazy golden with white head that is leaving a spotty lace. The scent carries a fresh hop zeal that has a hint of potpourri. The taste is evenly balanced and crisp. Floral base with pine twang makes it worth while. The mouthfeel is light to medium in body with good carbonation. Overall this is a good beer and would recommend it.

Pours a half finger of head on a hazy medium straw colored body.
The aroma is quite nice: grapefruit and orange.
The taste starts with a jab of lemon bitterness then lightens up a bit in the middle, finishes with a strong lemon and pine bitterness. Nice profile.
The texture is crisp with some nice fizz.
Great aroma and good tasting.

Having downed quite a few cinematic trilogies in my day, it's about time I took on one from the brewing world. This stuff pours a clear brass topped by a short finger of lightly off-white foam. The nose comprises orange zest, apricot jam, light pine resin, and a touch of caramel in the distance. The taste takes a strange turn, unfortunately, opting for a surreal focus on month-old ruby red grapefruit rind mixed with cabbage greens and dried honey. Nothing about this flavor combination is in any way good. The body is a light medium, with a light moderate carbonation and a fluid-ish feel. Sadly, the aftertaste lingers, providing me with more than enough guilt and remorse for having even sampled this garbage. Overall, a good idea and a good smell don't translate into a tasty beer by any metric. Now I'm not even sure if I wanna give the other two entries a try when they appear...

Poured into a Dogfish Head pint glass. Pours a slightly hazy, medium copper amber with a half finger white head with good retention and lacing. Aroma of biscuit malt, grassy and lightly citrus hops. Flavor follows, with biscuit malt, grassy and citrus hops, light melon fruit, flavor falls off mid-taste, but recovers to reveal some mild fruit and lingering tea and grassy hop bitterness. Medium bodied. Classic pale ale profile with a good balance between grassy and lightly citrus hops and biscuit malt. Flavor is mellow but a satisfactory variety of hop flavors. Crystal hops are kind of old fashioned now, so it was interesting to taste them again and it does bring back memories of early craft ales.

12oz bottle. Poured out a clear, golden orange color with a small, off-white head of foam. It smelled of melon, orange and toffee. Sweet fruity taste with caramel and a mild bitterness.

Bridgeport's tapered 12oz bottle served in pint glass. Beer pours pale golden in color with an impressive white head. Big, super fruity, fresh hop aroma. Really, this smells like a bowl of oranges. But this is no IBU monster. Just totally respectable American pale ale with a serious load of dry hopping. The beer is not totally dried out and leaves my palate a little bit sweet, though maybe that's just because I'm expecting a beer this aromatic to be more bitter. Still, I think this is solidly sessionable.

A mild yet tasty beer with a nice combination of balance and depth. It's easy drinking and not overpowering in any one area. I see it as a nice alternative to heavily hopped IPAs as this particular offering gently pulls you in with multifaceted aroma and taste experiences while leaving you satisfied overall. Very nice offering.

Taste: Just like the aroma, there's a touch of malt sweetness at first before being swallowed by a tea-like tang and spicy, woody hops.

Overall: On the verge of outstanding, but still very good.

Smell- Nothing to smell here

Taste- The hops finally show up (see above) and this pale ale is more bitter than anything.

Mouthfeel- Refreshing and for lack of a better word smooth, very drinkable.

Overall- I think my palate is busted from a winter of IPA's but this Pale Ale is great on a hot day, I think I was just look for something little more bold from brewery that made IPA the beer of choice for people that know there stuff.

An enjoyable, well done done pale ale, though nothing particularly memorable or exciting.

Smell: Half of a sweet, simple cookie, a smidgen of grain. Tropical citrus, hints of flowers, resin.

Taste: Starts with a light, lightly sweet cookish maltiness, then, a sip of grapefruit juice infused with florals and a bit of resin. Slight undercurrent of yeast. Moderate bitterness. Drying, citrusy, bitterish on the finish.

Overall: Wasn't too enamored with it. Maybe it will be the Phantom Menace of the trilogy!

12oz bottle $8.49 per sixer. Orange and completely hazy. Aroma is lemony with hints of water crackers, just ok. Flavor is more lemon with this odd aftertaste that's sort of dirty and I get it from Bridgeport IPA too. Overall a very so-so pale ale, I'd take a Sierra Nevada over this any and every day.