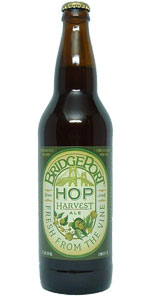 Served on tap in a pint glass.

Appearance: Clear honeyed amber topped by a thick white head composed of tiny bubbles. Head retention was pretty awesome - it looked like a nitro-tap - and sheets and splotches of foam was left on the side of the glass.

Smell: Clean, simple (but good), aromas of mildly coniferous hops. Mild traces of caramel malts. Not powerfully fragrant, though. This would get better marks if there was a bit more to it.

Taste: Initial melange of sweet malt and juicy, sappy hops. Not overpowering, this is a nice clear beer. "Like a good perfume, it sticks around long enough to be enjoyable," to paraphrase the patron next to me

Mouthfeel: Light, but not ephemeral, in body. Clean and crisp.

Drinkability: Sessionable, and how I wish I could have one with this rare gem. Quite good, but not as awesome as Moonlight's or Russian Rivers fresh hop beers.

Other: The patron next to me thanked me effusively for the recommendation, though he did look a little less than amused when I told him he'd probably never see it again.

I sampled this at the wet-hop tasting at RFDs in Washington, D.C. This appeared a light amber color with a slight off-white head that left some lacing around the glass. Aroma is a bit sweet with caramel and full of citric and piney hops. Overall the aroma is pleasant but a bit mild. Tasty is fairly sweet with a juicy hop presence. There is a bit of citric hops almost like juice flowing through this, though on the mild side. Mouthfeel is quite light and this went down fairly easy. Decent brew but if can definitely stand some livening up.

The Hop Harvest came is a cool bridgeport bottle with no freshness date. It poured a nice amber color with a decent foam head that left sea foam lacing on the side. The smell was of dank hops. A hop head's delight. The taste was a little on the bitter side with strong hop flavor with a nice sweet lemon flavor. I will be drinking this one again if I can find it. I bought it on Saturday and it was gone today when I went back. It won't last long get them while they are hot and cold.

Found this gem on bottletrek. Poured into a 16oz weizen glass.

T - Bitter and tasty, this spicy hop profile is very profound. This is my second "wet hop" brew, and I must say it's rather consistent. Citrus notes shine through as well, but are a bit muted.

D - Pretty good, this is a tasty brew, and I could easily kick back another. I love trying to find little gems like this brew, they fly under the radar unfortunately, mostly going unnoticed, but it's great discovering one and encouraging others to try it. I recommend this one.