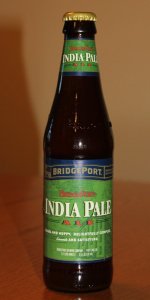 Appearance – The beer pours a hazed golden amber color with a huge head of billowy white foam. The head has a fantastic staying power, only very slowly fading to leave tons of foamy lace on the sides of the glass.

Smell – The aroma is heaviest of a grapefruit citrus smell mixed with a moderate showing of some pine. Along with these aromas comes smells of a cracker malt like smell and a little bit of an herbal aroma.

Taste – The taste begins with a with a semi-sweet malt flavor, being a mix of a bready and crackery taste combined with a little bit of a caramel flavor. Upfront there is also a bit of a grapefruit hop, which remains throughout the taste. As the taste advances some of the caramel sweetness fades, only to be replaced by some flavors of orange an light fruit and more hop flavors of a pine and earthy nature. In the end, the later hop flavors dominate the hop profile and with the mix of modest sweetness, malt, and hop, one is left with a somewhat drier, and more lightly hopped IPA flavor to linger on the tongue.

Overall – An alright IPA, but a nothing too exceptional overall.

GABF Weekend '08
It's good to revisit this beer after about five years. Along with Sierra Nevada's Pale Ale, this beer defines the style for Pale Ales. A very crisp malt backbone shows low-lying sweetness but strong malt character that hinges toward well attenuated barley flavors and an accentuated hop bitterness. Hop flavor in almost undoubtedly Cascade with a spicy grapefruit-orange zest flavor. Finishes with a snappy malt dryness and a lingering fresh hop flavor.

Appearance: Upon pouring, the color is a nice deep orange. The head is somewhat sizable and as it recedes, it leaves a nice lace pattern down the sides of the glass.

Aroma: A rush of citrus is evident right up front. Hints of grapefruit, esters and a piney smell pleasantly invade the nose.

Taste: As expected, the Cascade hops show their presence immediately while a strong malt backbone creates a very enjoyable balanced ale. The alcohol is well hidden due to the ingredients all meshing together superbly. The mouthfeel is somewhat creamy and the finish is relatively dry.

Comments: This is probably my favorite session IPA. The 5.5% abv allows me to enjoy this beer without it eventually sneaking up on me. All in all, just a wonderful IPA from a brewery I hope to visit when I get a chance. On a side note, this brewery was featured on "Beer Nutz", a show on the InHD channel (Time Warner Cable). Very worth checking out as it shows some of the great spots to grab a beer in Portland as well as other cities.

Beer is a dark golden color, fairly clear with a little bit of head floating above that left some lacing here and there on the glass. The nose is dominated by hops with pine and some orange and lime citrus shining through. Light to medium bodied on the palate. There is a little bready maltiness up front but that is quickly overtaken by an assault of pine and citrus hops. There seems to be a hint of fruitiness in the center.

This is not a bad brew. I feel that it could use a little more depth and it would be a great one.

A decent IPA, but certainly not a Dogfish Head 90, or even a Stone IPA. Pours a clear copper with a half-inch head that didn't care to stay for long. Nose is hoppy, lightly grapefruit-like, but the malt was also evident. Taste was not hoppy enough for what I like an IPA to be. A bit of orange/grapefruit, then clove, followed by some grassy malts. Not very deep. Pretty carbonated, with a spicy mouthfeel due mainly to the carbonation. Light and drinkable, though. Maybe a good summer IPA.

It's an IPA! Only 5% ABV and 50 IBU's you say? It can't be an IPA!! Oh but it is, and a very well made one at that. It's just that these days I've become accustomed to bigger and bolder IPA's with 80, 90, 100! IBU's and bigger malt backbones. Look at the style guidelines and realize this is where an IPA used to fall, should fall? The advantage is drinkability.

Taste:
Citrus and pine, well balanced and not aggressive at any point. Dry finish not leaving much behind. Would like the malt to step forward a bit more and contribute.

Drinkability:
Great for an IPA! This beer is not concerned with winning the hops arms race, but rather with you buying more of it. Smart beer...

This was my go-to beer when I lived in Portland. Readily available, & the bottle-conditioning gives it that "silty" taste that I love so much but, strangely, have a hard time finding. (Others would be Brooklyn East IPA & Cooper's Pale Ale from Australia).

Beautiful light golden color, quite hazy, with a solid finger of head atop the brew. Aroma is full of citriusy hops. Initially bitter with a lot of lemongrass-like hop flavor. Malt is very light, with only a slight residual sweetness. Finishes dry. Medium-light body with a powdery-dry texture. With so many excellent IPA's available, this beer doesn't really stand out well, though there are no particular flaws. A fairly light, easy drinking, but still pleasantly bitter beer.

A: two finger frothy head with nice retention and lacing on a murky golden with crimson hues body.

T: this one is a little watered down with some citrus hops but overall the hop character is very simplistic and short lived with each taste.

M: lighter body than I would expect. moderate carbonation.

Overall: I feel I rated this one generously. Drinkable but not great or memorable.

Thanks to 1hopmontster for this one...have been looking forward to this one since we started talking up a trade...did not disappoint.
Pours a cloudy, golden orange color with a full finger of snowy, bright white head that sticks around for most of the pint...and produces some impressive striated lace.
Bitter, piney hops in the nose...a touch of malt in the mix as it warms.
The taste is fantastic...sweet malt shines through to balance this offering out perfectly. Tons of resiny hops in the flavor, yet hitting me more like a hopped up English style IPA.
Mouthfeel is slightly above average and the carbonation makes this highly quaffable. Finishes bitter but not dry and the hops linger on the pallet with incredible flavor, yet not sweet.
Have to add this one to my handful of exceptional IPA's that would find it's way into constant rotation if only if it was available in my area...one can only hope I will find this one again in my travels.

The aroma is full of citrusy and piney hop character, also a touch of sweetness.

Taste has a nice citrus hop with some grassy tones. A nice light bittering bite.

Drinkability is relatively high with good flavor and low alcohol making it very easy to consume.

Poured at 50 degrees, slowly (as suggested on the label) so as not to disturb the yeast. Crystal clear golden yellow, with a voluminous pale yellow-white head. As the glass was emptied, last two ounces (with yeast sediment) were poured more aggressively to yield a hazy yellow. Head disappeared a bit faster than the beer disappeared, leaving a thin but distinct layer in the end, and some sticky lace on the glass.

Nose floral and citrus. Taste was a nice balance of malt and citrus hops, hops taking the upper hand to state it was an American IPA. A touch of apricot in the beginning, with distinctly more grapefruit character after the yeast was added in the end. Hops were not overwhelming in this IPA, making it a good candidate for a session beer. It had light carbonation, a bit less body than I anticipated. Smooth, slightly astringent finish.

S: Heavy grapefruit with some lemon, toast and fresh flowers in the background.

T: Grapefruit from the aroma carries through and is accompanied by tastes of lemon, toasted malt and a little pepper. Bitterness builds rather than hitting all at once. Malt becomes more prevalent in the back end. Finishes with a nice balance of citrus and malt.

I picked up a single bottle of Bridgeport's bottle conditioned IPA from a brown bottle. No date was listed in bottle anywhere on the bottle I could find.

The beer poured a perfect gold color with champagne like, perpetually rising carbonation. The beer's inch of pillowy white head and a gradual number of lacing rings down the sides of my glass. The beer's nose was slightly disspointing: bland and slightly grainy. Bridgeport IPA's flavor was lightly, citrussy hoppy initially with a pleasant, dry finish. The mouthfeel is medium bodied, and the drinkablity, because of its lack of over the top hoppiness and nice balance, this IPA is pretty darn drinkable. this beer.

Appearance: This pours cloudy - too cloudy for me.
Smell: Strong grapefruit oder that also is evident in its tart taste. Fruity is ok but I am definitly not into grapefruit. Heavy hops but the tart grapefruit dominates everything.
A high moderate body that has a good mouthfeel- tangy/tart/bitter.
Maybe this beer is too complex for my simple taste buds