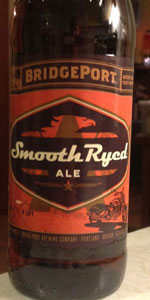 I decided to this as a tasting of a rye beer (this one) alongside a rye whiskey (I went with Bulleit 95% Rye).

The beer pours light amber with an off-white head.

The aroma is delightful with lots of fresh hops and some spicy rye notes.

The flavor is well-balanced, fairly sweet (sweeter than most rye beers I've had), with some spicy notes. Definitely a good amount of hops (maybe along the lines of an English Pale Ale) but the dominant note is the rye. Spicy with a tiny tinge of sourness.

After enjoying half the bottle, I next turn to the Rye whiskey and pour a little bit. Many of the same rye notes but with the alcohol burn (of 90 proof whiskey). Fairly dry but with a tiniest hint of honey. Almost (but not quite) a scotch-like aroma, but without the peat.

OK, back to finish the beer.

I can still taste many of the rye notes (echoing that of the whiskey) but with more sweetness. Maybe some maple syrup? A little bit of herbs. A tiny bit of black pepper. Some jewish rye breadyness.

Overall I recommend this beer. My only regret is not buying two bottles. Next time I might try this one with a little bit of the Bulleit 95 rye whiskey added for extra fortification and ryeyishness.

Taste 4.0: Front is slightly sweet with a very brief hint of hops. Middle is thick and malty. Semi-sweet with a slightly dry and spicy twang. Finish also has that pleasant spiciness and showcases a tasty, hoppy, alkaline hint along with very brief flashes of malt and caramel. Aftertaste is short, dry and refreshing.

Mouthfeel 3.75: A bit too bubbly. Less bubbles would have made it feel more like an ale, but this level makes it sort of strange, an in-between kind of beer sensation.

Overall 3.75: Probably the best rye beer I have tasted. It is not perfect by any means, but is good at what it attempts to do: create a refreshing, "seasonal" (the box said that, not me) brew. Sessionable and probably great with food, there is no hint of its 6.3% ABV. A sleeper, a surprise and worth purchasing if you see it.

A: Dark but crystal clear red with a white fluffy head that sticks all the way down.

S: Not much to speak of, malty and slight hops. Very feint peppery rye scent.

T: Strong caramel malt back end with a feint piney hop bite. The rye character is here, but I'd really like more of it, this tastes a tad watery.

M: Medium to light bodied, but with a nice carbonated character. Fairly watery for my tastes.

O: Not bad at all, a good session ale. I wouldn't buy it again but would gladly drink many more!

A: somewhat agressive pour got a finger width head that fell to a thin cap with a thick ring around the glass. Super clear amber color. Pretty much what I expected, about the color of a rye whiskie.

S: pretty hop foreward nose. American hop varities I am getting herbal citrusy notes. Cascades I think, can't find the rye in there. The hops dominate but aren't overpowering. A little sweetness in there.

T: simmilar to the nose. lots of grassy slightly citrusy hops. Tasteing orange rind. Can't really identify the rye as rye. The hops are a little heavy handed but not bad. Finishes a little bitter, the hops linger for a while on the tongue and throat.

M: a good smooth medium body with enough carbonation to keep it interesting.

O: not bad, refreshing, a little hoppy but I can deal. Almost a rye.P.A. I have 2 bottles left they will go quick.

Picked this up for $0.99 as a single at a local liquor store. Figured I'd give it a try since I am a fan of Rye beers.

Poured 12 oz bottled into tulip glass with a nice inch and a half head that took it's time to settle and left some nice lacing on the glass. Color is a deep orangish / red.

Aroma is quite pleasant - getting caramel/biscuity and some citrus

Taste - a bit of a bitter hop flavor balanced out with some rye / malt. The after taste is somewhat unpleasant.

Overall - Decent beer, nothing to write home about but at least trying for a dollar. Wouldn't pick up a sixer of this though