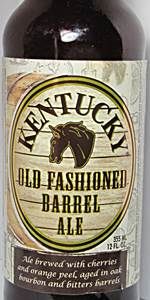 Notes:
View: Beers
Reviews: 44 | Ratings: 182 | Log in to view all ratings and sort
Reviews by kojevergas:

Nabbed a 4-pack on clearance at a Total Wine & More in Austin, TX for $6 USD plus tax.

APPEARANCE: Creamy off-white head lasts ~8 minutes...that's rather superb given the beer's 10% ABV. Thick lacing sticks to the sides of the glass as it recedes. Thick and robust.

Body is a clear vibrant copper-amber. Appears filtered; I see no yeast/lees within.

Oak? Bourbon? Not really...all I get is that barrel sugar sweetness. No coconut, vanilla/vanillin, toasted white oak, or the like. Bitters? I'm not finding 'em.

Not boozy, contrary to my fears. Suggests a slightly syrupy slightly sticky ale with heavy sweetness but a well-disguised ABV and a fruity flavour. Nothing wrong with that, but it isn't saliva-inducing.

TASTE & TEXTURE: Syrupy indeed, with some stickiness. Very weighty and slimey on the palate, which lends itself to a sort of medicinal mouthfeel...not very approachable fare. Fortunately, the alcohol isn't too present; there's some warmth in the belly after drinking it, but it's a pleasant warmth and is in keeping with the idea of an old fashioned ale.

Certainly a sweet brew, which serves to hide the ABV. It's a bit like a malt liquor in that respect - is it worth syrupy sweetness to hide alcohol heat?

Full-bodied, unnaturally smooth, wet, unrefreshing. Weighty filling fare, but I'll be able to finish the bottle in one sitting. Not quite a sipper from the alcohol, but less drinkable than it should be owing to that decreasingly palatable saccharine syrup note.

OVERALL: I feared the worst venturing into this, but it's not the boozy sticky mess I expected. Kentucky Ale seems to trade on a bourbon-forward brand image (I mean, it's Kentucky), but this beer doesn't bring the bourbon the other beers I've tried from them do. I don't particularly like the premise of the beer - do we really need a beer that tastes like an Old Fashioned? - but the execution isn't awful. I can't say I'd buy it again and each sip reminds me I need to schedule a visit to my dentist, but it's far from awful. I wouldn't recommend it to others but it's okay.

Very smooth, love the hints of fruits and of course the bourbon

Notes via stream of consciousness: So I assume this is something like an "Old Fashioned" cocktail based on the label, or at least the orange peel, cherries, and bitters barrels that are listed. So let's see, it's a clear deep-copper with golden-orange highlights beneath a finger-thick head of creamy off-white. The aroma displays only caramelish malt and a hint of orange and maybe some light herbs. The flavor delivers more, and I'd say it tastes something like an Old Fashioned without really having any of the parts particularly show. What is there is mainly caramelish malt, and then orange with a hint of cherry, oak and herbs, and alcohol. It's 10% so that's acceptable to me, and to be honest, probably required for what it's intended to be. It unfortunately tastes a little bit like a watered down Old Fashioned, one that was left and all of the ice melted. I wish there were more to it. On the other hand, it's really well balanced and does contain a little bit of everything promised so I can't really say there's anything wrong with it; no defects. To finish up, it's medium bodied and gently crisp with a moderate carbonation that warms in the mouth to leave it smooth - complementary to the idea behind it; and the head fell fairly shortly but it left some very nice lacing behind. I'd suggest it's worth trying but it's not their best offering.

After reading a few of the other comments I expected a lot more out of this. What I got was an aroma that's understated fruit, malt, and a hint of lumber. Flavor's mostly sweet tart, with little bitter. There is some sweet tart flavor, but it's mostly generic with only a suggestion of cherry. No bourbon or anything else. A little boozy in the finish, but that comes and goes. Not bad beer, but nothing special.

Aah! As refreshing and flavorful as the Old Fashioned bourbon cocktail is, it seems that its laborious attempts and passe status has rendered the flavor as timely as its namesake suggests. But with the Lexington Brewing folks gaining inspiration from those cocktails, a beer is born...

Of serious caramel maltiness and supportive spice, the ale pours the tawny caramel hues that are even suggestive of bourbon. But once its froth and fizz explodes in the nose, the essence of citrus, cherry, caramel and marshmallow precedes the strong taste of caramel and simple syrup.

Contending with the strong caramel, butterscotch and creamy sweetness, the body is lush with sugars even as the layers of citrus peel, dark cherry, berry and currant lay on the tongue with a delightful ease. Bourbon awakens to reveal the caramel, vanilla and tannic oak to counter the malt that trails consistently in aftertaste.

Warm and medium-full, the beer's sweeter focus is suggestive of heavier beer, but its semi-dry malt backbone, high alcohol, and moderate hopping rates ensure a balanced finish with tethers of fresh pine shaving and a sweeter afterglow.

12 ounce bottle, 050615 is stamped on the bottle, not sure if that's the best by or bottled on date. Served in a snifter, the beer pours a clear orange/amber color with almost an inch off-white head. Head retention and lacing are both decent enough. The brew smells like cherries, candied oranges, vanilla, oak and some bourbon. The taste is similar to the aroma, but there's also some bready malt and sweet spiciness noticeable, too. Mouthfeel/body is medium, it's coating and slick with low/moderate carbonation. I thought this was good, but at $4.99 for a single bottle I'm not sure if I'd pick this up very often. Still, it's worth a try at least once, it's an interesting brew.

Can't quite remember how I got this but I think I traded out for this quite a while ago. The only other offering that I had from Alltech was their Bourbon Barrel Ale, so I could tell that there was a theme going on with their lineup. I like an old-fashioned when I go out to drink but never could I have imagined that a beer would taste like one. Yes, this could have "used" more bitters but for the most part, this nailed the essence of that drink down to it's relatively ease of enjoyment and hidden presence of alcohol.

This beer had a nice look to it as I poured it out - to the point where it reminded me of something from Innis and Gunn because of the level of clarity and smoothness that it conveyed. A rich almond hue with a fair amount of sediment was what I saw when I held this up to the light, as the head was khaki with a hint of cherry blossom tossed in for good measure. Lots of muted cherry juice, oak barrel aging, and a bit of blood orange in the nose with all of those in the taste as well. Juicy, dark, and slick, this beer reminded me of a cocktail that was somehow fermented and hopped with plenty of carbonation and booze to keep things strong and lively.

Plenty of booze here but when you're having something this smooth, who's to notice? I loved how smooth this was and if you're into beer, you probably will feel the same way. Orange peel, bourbon barrel, and peat malt were all present here as this felt like a cocktail come to life via yeast and hops. Not quite a gimmick, this was a beer that expands the profile of what's possible in a malted barley beverage. Worthy of it's own category!

A: The beer is relatively clear amber yellow in color and has a light amount of carbonation. It poured with a thin off white head.
S: Light fruity aromas are present in the nose—green apples seem to stand out in particular—along with some hints of whiskey.
T: The taste follows the smell and has fruity flavors of citrus along with bits of whiskey.
M: It feels light- to medium-bodied and a bit smooth on the palate and has a moderate amount of carbonation
O: This beer is easy to drink and goes down very easily. No alcohol is perceptible whatsoever.

The question is do we review this is a beer or a mixed drink?

A lot of booze, bourbon, some oak, and cherries and orange notes.

Body and carbonation are middle of the road.

Bottom line, this is what it is. It's beer made to taste like a mixed drink. Throw in a few ice cubes if you want less power and have at it. Not a beer to have multiple times in a day. But a nice change of pace.

Taste is dark cherries, orange, cedar, and corn bourbon. Solid, dry, semi-sweet beer. I find myself liking other Alltech releases more, but this one still being better than a lot of the beers I have tried. I might get this one again, but may get others from the brewery first.

Bottle with no obvious date code served in a tulip glass.

Taste: Cherry forward with a boozy kick. Little in the way of Barrel character on the mouth but very nice and fairly well balanced.

Overall: I had low expectations but this was a nice beer. Not a world class Barrel Aged example by far but a nice change of pace with the cherries.