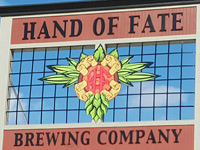 Best new brewery in the greater Springfield area, and likely in all of central Illinois. A true hidden gem. Last summer I had tried some of their beers at the Springfield Oyster Fest, and they made a big impression.

Located in Petersburg, right outside of Springfield to the northwest. Petersburg is a quaint destination river town near Lincolns New Salem State Park, with a friendly smalltown feel and a few cool victorian b&b's (one right next to the brewery).

The brewery is right on the town square, with a rail and seats out front to enjoy the sunshine. Inside it's airy and spacious, with smooth concrete floors, exposed brick and high ceilings strung with hanging lights. The bar itself had lots of cool details, reclaimed wood surface and antiqued corrugated metal, vintage playing cards and barrels, beer crates and metal work above the "roof" of the bar. Brewery equipment was visible along the back hallway, with various old breweriana pieces on the walls. There was a good crowd of locals and travelers in for the holiday weekend that were friendly and welcoming. The guy next to me at the bar struck up a conversation, and it turns out he was the State Representative of Illinois.

Beer selection was fairly eclectic, 6 taps running, 12 total once they maximize their production. New England-style IPA, Scottish Ale, French Saison, Vanilla Cream Ale, Milk Stout, and an imperial Wee Heavy. The brewer was on hand, chatting with the crowd, and mentioned an imperial porter was on deck. On a later visit they had a great Gose and cucumber Saison that were super refreshing, and a BA coffee imperial stout that rivals some of the big names. Great range of styles and frequent rotation.

Service was quick and friendly, we stopped in twice over the weekend and service was great both times. I'm used to ordering at the bar, but they offered table service as well. Growler requests were handled quickly too.

2017 update: Dr. Ug's from Virginia IL has a kitchen set up in the brewery with a small menu with daily specials.

2018: New patio area in the works with some cool murals out back. A few rotating beers in distribution, including cans of the IL bicentennial beer 1818. A wide range of rotating styles, HOF continues to impress, and i'm looking forward to what these guys do next. They have a lot of brewery exclusive stuff that doesn't get packaged.

Overall it was a great experience, and i'll be back whenever i'm in the Springfield area. It's always worth the detour.

Hand of Fate Brewing Company in Petersburg, IL
Brewery rating: 3.99 out of 5 with 93 ratings