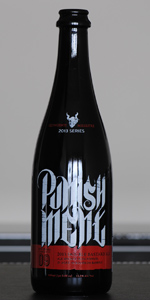 Notes: A palate-punishing ale unlike any other
Never intended for the timid, Punishment is the capsaicin-throttled spawn of a beer behemoth, Double Bastard Ale. In this year’s brew, the flavors of Double Bastard Ale have been further enhanced by the bourbon barrel aging. The addition of chile peppers to the beer adds lingering flavors in the finish of subtle tropical fruit and some layers of heat along with the toffee, caramel malt and hop flavors.
View: Beers
Reviews: 89 | Ratings: 396 | Log in to view all ratings and sort
Reviews by atone315:

2015 bottle poured as part of a friendly bottle share during the Packers vs Cowboys game. This beer is good although a bit more spicy than I was expecting, I guess they weren't kidding when they named this beer. I didn't really pick up any barrel characteristics but the chiles definitely showed up. One dimensional beer, would not buy again.

A: Pours a murky brown/mahogany color with 2 fingers of head that slowly fades down to a thin cap/ring around the glass

S: Peppers, peppery heat, lots of malt, and the bourbon barrels (oak, vanilla, bourbon) all come out and try to fight for aromatic supremacy. The peppers win out by a hair (literally the peppers, not the heat). Quite balanced for what it is

T: Starts off with lots of peppery heat (definitely more of the heat this time) followed by the peppers, malty sweetness, bourbon, and vanilla. The woody oak takes some time to come through, hitting hardest once the heat has died down a touch. The heat lingers, but allows for all of the other flavors to come through nicely, most notably the vanilla and malty notes. The sweetness form these cuts the heat enough to the point where it's still in your face but not overwhelming. Finishes with lingering heat and some light vegetal pepper notes

O: It seems like everyone who tries this and calls it too spicy doesn't get Stone and the fact that they hit home the point in everything they brew. No different here, which is why the beer is called Punishment. Definitely a brew for those who like EXTREMELY spicy foods (which is why I picked up both this and Crime and enjoyed both) and really not for anyone else. Just don't go on and bitch about it when there's a big explanation about how spicy the beer is on the back. You know damn well what you're getting into

Oh my God, this is the most extreme of extreme beers. It is actually hotter than buffalo wings. You may need a beer to accompany this one. The aftertaste is forever and hot as hell.

Be prepared for this one. I think it's one of the great unique beers. It's something special, but it's not easy to drink.

A: murky brown like the Crime I just drain poured

S: The Devil's balls after sitting in a hot tub for an hour

T: Those same Devils balls. This is brutally spicy and just hurts

Edit: I absolutely love spicy hot food. This isnt bout being able to handle the heat, its just a bad beer.Plain and simple.

This beer is like drinking liquid Capsaicin - really there is not much else to say. There is so much spice heat in this beer that there really isn't much else that you notice. Awful, awful, terrible beer and I'm severely disappointed I bought it. Should have checked Beer Advocate's rating before plopping down $35 on this guy!

Listen Guy, this is the worst beer I have ever had besides Crime. Do not waste your money, sobriety or time. The smell made me want to throw up. My 3 friends and I could not drink more than a sip each. We poured ours out and drank a Founders Backwoods Bastard to bring our palates back.

Enjoyed Crime, but this one was terrible. I like the pepper finish in a lot of these stouts and don't even mind a little heat, but this was nothing but heat, way too much. Kept trying Tio like it for several sips as it warmed, finally gave up and drain poured.

Muddy brown with tan head that dissipated. Aroma just like bba arrogant bastard. Oak, bourbon, toffee, caramel malt, slight citrus dank hop. And then a hint of chilies too. Taste: up front the oak, bourbon, vanilla, toffee, caramel, malt. Middle of the mouth the hot pepper appears and plays off the citrus hop flavors. Finishes with a lasting heat and slight alcohol warmth. Mouthfeel is medium. Overall, excellent use of spicy flavor to enhance an already great beer. Heat doesn't overpower, but leaves you eager for another sip. Some find it too spicy, I didn't, thought it was just enough heat without interfering with the beer underneath. Maybe it could've been just a little hotter...