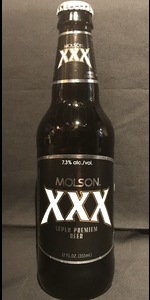 Notes: Brewed to be our strongest tasting lager using extra malt and hops in the brewhouse and fermented to give a smooth slightly sweet well balanced beer at 7.3% alcohol.
View: Beers | Place Reviews
Reviews: 245 | Ratings: 597 | Log in to view all ratings and sort
Reviews by Andrew526:

I'm a big fan of Molson Canadian, and so far, I think I'm the only one in my neighborhood who says that. At the liquor store I work in, nobody buys the twelve packs, and the only Molson product that moves is Molson Ice. Nonetheless, I had a friend who went to Canada pick me up a twelve pack of a Molson beer they didn't carry in the states and he returned with a twelve pack of Molson XXX. Had no idea Molson was also known to bulk-package their own signature malt liquor, but you can never predict beer nowadays.

The beer is your archetypal malt liquor, with a surprisingly heavy bottle boasting thick glass. It's a sweeter beer, with high tones of corn husk, sweetness, and a sharp alcohol bite that gives you 7.3% abv with no subtly whatsoever. It's gonna take me a while to get rid of this twelve pack, given I cannot session this beer. Not bad, but nothing special, and a sharp downfall from the greatness of Molson Canadian.

Poured from a 25.4 ounce can into a beer glass.

Appearance: The best feature of this beer is the head, hands down. Thick, yet airy, like a cumulus cloud. Dimples slowly down to meet the slightly darkened straw colored beer. Medium carbonation is visible. Not bad from the get-go.

Smell: Fresh popcorn, faint bitter hop aromas, very light malt base. Only a touch of alcohol is present in the nose. In that it is NOT unpleasant, I give it just a touch above average.

Taste/Mouthfeel: For a malt liquor, there's a lot of good flavor here. Beer starts out crisply, with some initial bitterness. As the beer warms on the tongue, the malt actually comes through with some subtle sweetness, almost a melon-like quality. Texture becomes slightly chewy, allowing for the flavor to be released. Aftertaste is almost non-existent, which I have found to be a positive quality with most malt liquors.

Drinkability: Cold, it's a great malt liquor. I'm not so sure how I would feel about it served at room temperature...so I won't wait too long to finish this brew.

Nice job Molson for making a decent Malt Liquor...a style renowned for its inability to achieve in taste what it achieves in ABV.

First beer I got drunk on. Stored behind my garage to hide from my parents for about 6 months before drinking. Beer was absolutely ruined, and it ruined me. It will always be a memory of the reason it took me another 5 years to get into beer.

S: vaguely similar aromatics to a dry, spicy Belgian strong pale like Delirium... bit of that lightly-toasty, popcorny, curiously buttery pils malt note that some of those abbey blond knockoffs have... a bit pissy on the edges

T: oooh... hmmm... might have let this sit a couple minutes too long before popping the seal... dank, blanket spiciness with a low hum of rubbing alcohol to fill it out... there's a dry, powdery sort of quality to the malt, drop of brittle sweetness... strong aftertaste of dirty nickels and paperclips... spectre of dry apple juice late... the marginal deficit in malt sweetness matched with the metallic nuance and a bland, mildly clove-like phenol lingering in the finish groups this more with those purposefully-potent Belgian pales... dirty and metallic overall

M: relatively dry with a light-medium flow on the entry, rounds up a bit on the follow through... this really oughta be drunk quite cold...

O: well... not my favorite malt liquor... bit of a European approach to its constitution that works to a disadvantage here... it might be alright if the metal element was toned down - there's obviously something tasty hiding below - has to get through unobstructed

LOOK: Pours a clear golden color, white head forms and has some staying power, but eventually recedes to a ring.

SMELL: Has that cheap beer smell, mainly corn but certainly other adjuncts.

TASTE: Creamy malt and miscellaneous grain sweetness, and a good dose of processed hops that does provide a coarse bitterness. Still finishes on the sweet side. The alcohol is well hidden.

OVERALL: This is much better than I remember. Used to pound these in college.

A - Pale straw, perfectly clear. Half inch of white, fizzy head rises and falls quickly. No lacing. Decent bubble activity from the bottom.

S - DMS is a rather large factor in the aroma, moreso than I've smelled in a lot of malt liquors as of late. Vague cereal grain, a touch of alcohol, and a metallic snap are evident as well.

T - At first I thought this brew was walking the line between good ol' macro lager and two fisted malt liquor, but I'm coming to the conclusion that this tastes like a macro with a shot of vodka. It isn't terrible, but it isn't what I'm looking for in a malt liquor. Early and mid palate flavors are almost nonexistant, carried away quickly by the carbonation. Mid to late palate a quick sweetness hits but is almost immediately pierced by a harsh burst of alcohol. Cereal grain flavor mingles around the edges but the alcohol is overpowering. Finish is dusty, metallic, and mildly astringent. The aftertaste itself knocks this beer down an entire half point; a sickening mixture of dirt, sugar, and a medicinal/crushed aspirin sort of bitterness.

M - Like the taste, much more akin to a regular macro. Body is thin and much less sturdy than most of the style. Carbonation is huge and doesn't let up.

D - Despite it's flaws, it isn't too bad to drink, though it's still low on the list even of "bad beers." As a sort of amped-up macro it might work, but it's far to crisp and dry for a proper malt liquor, not to mention I've had beers with almost twice the ABV of this where the alcohol was MUCH less noticable.

My bachelor party was in Windsor, Ontario so my friends and I picked up a case of the XXX and a case of Molson Canadien to drink in the hotel before we hit the town. There were six of us so we each had four of the XXX's as we got ready. I love beer and have always had a damn high tolerance, let me tell ya after four of these bad boys I was definately feeling the flow. A great start to a fantastic night. The flavor is average at best, but lets be honest you don't plunk down yer cash on this beer for the aroma, appearance, or mouthfeel. You buy it because it will get ya going and quick. Just be sure to treat this one like a lady cause she will kick you in the balls if you abuse her.

Bought a 24 oz can at a local party store in order to meet the debit minimum purchase. I figured I'd get something not necessarily compelling, but at least sweet and inoffensive. Well, I was wrong. From the can this one was boozy hot with sweet corn notes and a grassy, floral hop finish. After a few big gulps the booze heat lessens, but that mostly had to with the buzz the ABV was generating. There are other cheap, higher ABV brews worth the time.

steeler from Canada (ON)

Well well, I finally got around to trying this one. This is NOT a malt liquor, its a high ABV ice beer aka ice macro. Anyway, pours out a nice golden yellow color, with a inch ring of lace, that sticks, and there is vigorous carbonation. Looks nice. Smell is that bad molson smell, corny, wet cardboard, and the smell is definatly boozy, for ABV this high, no surprise. Im surprised this is brewed by molson, goes down kind of rough, has some hop bitterness, but finishes with blast of alcohol and cloying sweetness, decent. Mouthfeel is full, and surprisingly not over carbonated, and smooth. Drinkability is pretty good on this one, if you can keep it cold it really does go down easy, but if it warms, not so good. So i docked it .5 for that. Anyway, this beer was great for a high ABV ice beer, drink this for the buzz, not the taste. But i will say, XXX has the highest ABV ive seen for a ice beer (more than max ice) and it really does taste alright. I recommend this.

Poured into a pint glass.
Pours mostly Amber in color borderline orange. About a finger of white head thats soapy and disappears quickly.

I'm really trying to open minded about this beer. The smell is not good. Its like sweet corn and grainy ass.

If the smell was not good. The taste is terrible. Rancid yeasty corn, sour. I'm sorry but i cannot even describe it anymore.

Mouthfeel was fizzy and each swallow was worst then the previous.

I couldn't finish the bottle. I only drank it because my brothers friend brought some to the house and i was curious. Well, my curiosity got the best of me. I wouldn't even recommend this to someone who just wants to get drunk. You can drink some liquor for that and not have to deal with this trash.

I don't want to be one of those reviewers who rips on easy targets but i'm just calling it like i see it. If i liked this beer i would say so. I gotta get this taste out of my mouth now.