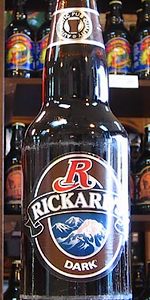 Reviewed by YEGtastes from Canada (AB)

Look: Dark cherry, I could see which finger you're holding up at me through the filled glass... so on the light side as far as porters go...
Smell: Licorice, caramel, hikers' granola, molasses.
Taste: At first a confusing jumble of interesting tastes.. nutmeg and a bit of cinnamon stand out from this slightly sweet, gingerbready-cocoa-ey beer. The chocolatey nose increases with time, as does sweetness. Nothing offensive, really. A bit of malt.
Feel: Too carbonated. I know it's Rickards, but they could have focused a little more on the flavour and less on the carbonation factor which is so dominant in mass produced beers today.
Nevertheless, the beer goes down relatively smoothly.
Overall: Not what I would usually look for in a porter. I feel like Rickards brewed a beer, got their creative team smashed off it, then had them throw darts at a board, pinned with names of different dark beers; the majority of darts that didn't gouge the wall happened to land on 'porter'.
If I just think of it as beer, it's pretty good. As a porter... meh.

Reviewed by Cramshawbar from Canada (ON)

1.46/5  rDev -52.4%
look: 3 | smell: 2 | taste: 1 | feel: 1 | overall: 1.5
After this experience, I am going to have to revisit Rickard's Red. Red used to be my go to beer before I discovered actual beer. My host at a party had Mill St. and this. I never had the Dark, so I tried.
It was awful.
Watered down, filth tasting something with added metal flavour to boost. An embarrassment for Rickard's. One of the few beers I actually had to pour down the drain - perhaps the fourth beer I ever had to do this with.

Rated by papat444 from Canada (QC)

2.73/5  rDev -11.1%
look: 3.5 | smell: 3 | taste: 2.5 | feel: 2.5 | overall: 2.75
This beer came out in 2009 and I just had the chance to try it today. The brewing is from Montreal.
The look inside the glass is dark but when you put it to the light is getting a red color.
The carbonation is light. I found 1 finger of head that quickly disappear.
The smell is a roast malt, with a bit of a sweet coffee.
About the taste their is nothing spectacular. I found a bit superficial. The 4,8 % ABV is a bit light for a dark ale. Taste a bit watery.
They say it's a English Porter. Nah I don t think so. I think they try to imitate the English Porter but for my taste this isn't a Porter.
So overall would I recommend it? No, there is not enough for me to recommend it. First of all this is not a Porter, its an imitation of it. Second is a bit watery. At 4,8% ABV it's very light. Wish it could be around 6 or 7 ABV. But if you are in a bar and wanna try a dark ale and this is the only option, why not give it a try.

Reviewed by PorterPro125 from Canada (NB)

A- Pours a beautiful Dark Ruby hue that is topped by a stunning 2 finger thick tan head. One of the more attractive Porters I have had the pleasure of sampling! Quite shocking from a beer that is owned by Molson Coors :').

S- Rickards Dark smells quite sweet! Many notes of dried fruit (mainly raisins) are prominent in this brew. Quite inviting to the nose!

T- The taste of this is much like the nose (sweet). I was expecting to experience some roastiness (great quality in a porter/stout) that did not make itself known in the beer. Although it wasn't entirely up to expectations, the flavor is nice and quite enjoyable!

M- Low carbonation to medium carbonation. Slightly more carbonation than the average porter. Quite thin compared to other Porters but still quite enjoyable nonetheless.

O- If you, like myself, are into craft beers and are thinking about picking this brew up, don't be turned off by the fact that Rickards is owned/made by Molson Coors. From what I've tasted so far, the Rickards line is far superior to its macrobrewed brethren in every single aspect. Rickards Dark is no exception: It offers a beautiful glassful of goodness that is incredibly sessionable(like any good porter should be). Do yourself a favor now and pick up a Rickards taster pack (like I did) and I am willing to bet that you won't be disappointing with a majority of the Rickards line.