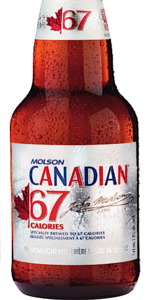 Notes: Premium light beer specially brewed to 67 calories per 341ml bottle – that’s about half the calories of wine or mixed drinks. Molson Canadian 67 is brewed using only the best this land has to offer - Canadian water, barley & no preservatives.
View: More Beers | Place Reviews
Recent ratings and reviews. | Log in to view more ratings + sorting options.

2.59/5  rDev +37%
look: 2.5 | smell: 2.25 | taste: 2.75 | feel: 2.5 | overall: 2.75
Ok, we get it. It’s not Heady Topper. It’s not an illustrious IPA, not is it even regular Molson Canadian. We get it. That being said, our neighbors to the north crafted a very good, low-calorie option for when you want to crank brews and not worry about your waistline. Molson 67 still holds that classic Canadian lager tast, with a third of the calories. While that is something we at the 1009 are hardly worried about when grading this category it's hard to avoid. Unfortunately, this is a dying breed. Molson phased out 67 almost a year ago for “Molson Ultra”. So, we grabbed this while we could. So long 67, you had a good run.
Jul 26, 2020
Rated: 3.15 by sakumoOD from New York

Rated by UncleBausta from Canada (AB)

Apperance- clear, rather play golden colour. Small half finger of white head with better retention than expected. Even a trace amount of lace.

Taste - a faint flavour of beer, but mostly like beer flavoured tonic water or club soda. Nothing horribly offensive.

Mouthfeel - feels way over carbonated body is super light, but these two factors don't go too well together.

Overall - worse beers exist and as a low carb option for people who don't like beer, this may be viable. Still of you're drinking a beer this light isn't water a better option?

Reviewed by CanadianBacon from Canada (QC)

Taste - spring water with corn in the background...

Overall - Might as well just drink a Molson Caanadian original... from what a remember the taste was tenfold better.

Reviewed by papat444 from Canada (QC)

1.75/5  rDev -7.4%
This tasted like a mix of water and the lightest beer available. I understand the need to watch your calorie intake but just drink water instead please. No flavor reminiscent of a beer.
Dec 07, 2014

1.78/5  rDev -5.8%
look: 2.5 | smell: 2 | taste: 1.5 | feel: 1.5 | overall: 2
Molson Canadian Sixty Seven.
The look of it is very light and it's yellow. Smell of hop and of corn. Remind me of the coors light it the Molson Canadian.
The smell of it. Nothing too different from the Canadian. Very similar.
Now the taste of it: well nothing to different than a Molson Canadian a bit lighter. A bit if a different taste to it. It's a bit plastic taste to it.
So overall would I recommend it ?? For man No, for women maybe. If you know what beer taste like don't drink that crap. But for women who likes to drink beer but wanna drink low alcohol percentage and wanna have low calories this beer is made for u.

Reviewed by wolf6656 from Canada (ON)

3.25/5  rDev +72%
Yes, you are all right about a lot of things.
This is a very light beer.
This is meant to be a very light beer.
If you are going to a barbecue, or party--like function, and have to drive home, 3 of these has less alcohol than 2 of another standard beer.
If you are working around the house on the weekend, on a hot day, this beer is perfect, because it tastes more like beer than most other light beers, and you can still get your work done.
I actually prefer this to regular Canadian. Had a Canadian the other day by mistake, and wondered how I ever used to drink it.
No, this is not a splendid taste experience, and there are no special food pairings for this beer, but this is a great beer to have in your fridge, if you feel like having A beer, but you know you will need your faculties later on.
Not bad as a summer patio beer, or a business lunch beer, or a performing on stage at a summer festival beer.
This is not a great beer, but it has a place in your beer arsenal.

Molson can spend all the money in the world to advertise and market each of their brands differently, but so long as they keep using inferior ingredients they'll all smell the same. And not even the cleverest commercial or slogan ever conceived will make them smell good. This may have half the calories but it has every bit the foul stench.

Indeed, like most of this brewery's beers, there's little of anything tasteful or notably "beer-like" about it; bubbles and water are obvious but malt and hops are imperceptible. It's no surprise that this drinks like a combination of corn syrup and pool water; after all, it is loaded with industrial (possibly chemical) adjuncts and produced on a massive, highly mechanized scale.

Let's be clear though: the magnitude of a brewery's operations is not what affects quality; in fact, larger operations tend to be more consistent and have far better quality control. Molson, however, is not in the business of making good beer - they're in the business of selling a lot of beer. And when this is the priority it's no surprise the products taste like watered-down HFCS.

The only thing that makes Molson 67 halfway swallowable is that, true to theme, it has much less of that artificially sweet, off-putting, corn syrup-like flavour than standard strength lagers of equivalent nature. Some, however, will feel the diluted profile is a detriment. It didn't have to be that way; alcohol and flavour are not necessarily proportional. I've had plenty of delicious and characterful beers in the 3% range - this, however, is not one of them.

If you’re holding your breath waiting for Molson to make a good beer, be prepared to turn blue in the face and die. Unlike their chief rival, Labatt, who actually took the hint when their profits started diminishing and responded with the respectable Alexander Keith Hop Series, Molson seems content chasing one fad after another and spending all their resources on marketing rather than offering a half-decent product.

2.6/5  rDev +37.6%
look: 4.25 | smell: 2.25 | taste: 2.5 | feel: 3 | overall: 2.5
473 mL can picked up at TBS; served well chilled. I had this a few years back - and by 'had', I mean an agent left a bunch of free samples behind at the liquor store I used to work at, which was around the time that this beer was initially being launched. As I chugged the contents of a single ice cold bottle just prior to clocking in for my shift, I was pretty sure it was the wateriest, most flavourless beer I'd ever had - and unsurprisingly, I haven't been inclined to return to it until now, when a lack of alternatives has left me scraping the bottom of the barrel.

Pours a clear, pale straw yellow colour, topped with one finger's worth of soapy bone-white head. Very active carbonation; streams of bubbles constantly rush to the surface, reinforcing the head for at least a few minutes before it finally recedes into a thin cap and collar. Lots of lacing, too - one of the better-looking light beers I've had in recent memory. It has that generic 'cheap yellow lager' aroma, with no real distinguishing traits to speak of... corn husk, a little grainy with some vaguely sweet features, and not much else. Typical of the style.

Weak, diluted flavour, but not quite as tasteless as some of the other 'low cal' lagers I've tried in the past. There's a light brushing of grainy malts and corn that vanishes from the palate almost as quickly as it appears. No real wheat malt presence (the label mentions both barley and wheat), and no real aftertaste - just some light malts, carbonation, and then it's gone. Thin-bodied and very watery, with heavy carbonation levels that give this brew a spritzy, lively feel in the mouth.

Final Grade: 2.6, a forgettable C-. A re-tasting of Molson Canadian 67 hasn't changed my opinion much - this is still an exceptionally watery, bland lager - but compared to certain other low-calorie light lagers (e.g. Sleeman Clear or Michelob Ultra), this one at least resembles an actual beer, so I can't grade it too harshly. These low-cal lagers aren't brewed for the average BA; they are brewed for calorie-counting women and people who don't like the taste of beer. Seen through the context of those goggles, this is at least a decent light lager, but there's no reason that anyone who falls outside of those categories really needs to bother with this.