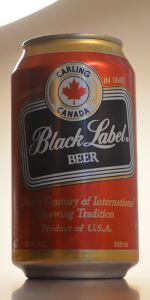 A hot post grass cutting day. I drank it out of the can. Perfect, the second one was even better. Look: perfect,because the can looks cool. Smell: seriously!? Taste: in the pabst realm, not watery, not too sweet, what, you were expecting the usual corn bread toasted malt b.s.? Feel: like a cold 12 oz can. Overall: on my way to the garage fridge for a 3rd.

Cheap sweet beer
Better than bud coors or green beer.
Not quite a banquet...

I’ve always enjoyed Black Label even though it does not taste like beer! Very easy drinking.

An old standby from pre-craft days. Poured from the 12 oz. can into a Victory Donnybrook nonick.

a: Clear yellow with a finger thick white head which receded to thin surface foam and slight lacing.

m: Light side of medium, OK body and some carbonation tingle.

One of my all time favorite beers,grew up drinking this stuff,smooth and great taste holds a great head...it even tastes great at room temptire and it is cheap! What more could you ask for? If you have never tried it ...you should so and you will like it..just wish I could I find it bottles though.

Sweet and refreshing... Probably the only beer in the world that holds its taste at room temperature.. It's very citrusy to my taste buds like five alive.

Idk why maybe because I find cheese disgusting and absolutely horrible, just the smell of cheese alone is enough to make me vomit.

This beer pours a brilliant pale yellow and is topped with a fleeting white head that leaves spotty lacing.

The aroma is grain with a little floral and grassy hops.

The taste follows the smell. It starts out with light grain flavor. it is balanced nicely by a touch of grassy hops flavor. The finish is a little dry and clean.

This is a surprisingly good lager as far as macros go. It has a little more body and a slightly dry mouthfeel making for an enjoyable drinking experience. Stroh's, move over. You need to make room for some Black Label in the fridge.

Happy CANada Day, hosers! Take off, eh? This is one of my FAVORITE holidays of the year since it provides me with the impetus to a) drink CANned CANadian beer ISO The CANQuest (tm); b) watch hockey (either pre-recorded games or movies, like "Slapshot"; c) watch "Strange Brew"; d) eat some beaver & e) parade nekkid in the street while waving a CANdian flag. 2017 was their 150th Anniversary so I pulled out all of the stops, using sparklers & firecrackers as accoutrements, which was attention-getting, to say the least. The local CANstabulary was bemused & amused as they led me away, but I was less-than-thrilled with the 1st & 2nd degree burns, especially to my sensitive bits! Needless to say, I have scaled back since then.

A BIG "THANK YOU!" to my local, in-person trading partner, @tone77 , for providing me with a buncha beers for today's CANebration! He said that many of them will take me back to the early days of The CANQuest (tm), when AALs were the standard & the norm. No matter! Today, we CANebrate & inebriate! Cheers to our CANuck neighbors!

This beer really takes me back. It was ~ 1969 & my late-Pops was a hardcore unionist working at the now-defunct ALCOA plant. A strike was in the offing & so a meeting was held at my parents' house to decide a course of action. My 'rents, while not teetotalers, were not big imbibers so alcohol consumption was kind of a rarity. I was ~ 4 y/o at the time & curious, so when somebody offered me a sip from their CAN of Carling Black Label, Pops nodded in assent & I partook for the first time in my life. I CAN only remember being astounded by the bitterness of the hops just before I dropped the CAN from my hands, spilling it all over the carpet. Uproarious laughter ensued, except from Pops, who promptly escorted me to bed. LOL.

I had "O CANada" playing on YouTube as I Crack!ed open the vent to begin this momentous CANebration.

This reminds me of another story. I was a Plankowner aboard the USS Normandy (CG-60) in 1989 & when we opened the Staten Island Naval Shipyard in late-1990, I was a fixture at Rangers games @MSG. It was easy - flash my active duty ID, pay a pittance & sit in the infamous Blue Seats where the action happened. Beer was a given & if I got there early enough to where they were not sold out, a potato knish. Profanity was the native tongue up there & cocaine was openly snorted, but those are tales for another time. On this night, the TOR Maple Leafs were in town, necessitating the singing of both the U.S. & CANadian national anthems. I know the latter in both English et Français so I was singing along when I suddenly registered the voices behind me. Right tune, wrong words, or so I thought. After the anthems were done & we were seated, I donned my Curious Cat suit & turned to ask the guys behind me as to what had transpired. They were Spanish-speaking Latinos of Puerto RiCAN descent who had grown up in Hell's Kitchen & were lifelong Rangers fans. They had been to so many games that they sing the national anthems in SPANISH! I sat back, flabbergasted.

Onward! I went with a nice, free-flowing Glug since this was such an auspicious ocCANsion, leading to the foamy formation of two-plus fingers of fizzy, foamy, rocky-bone-(Great) white (North) head, but with only moderate retention. 8=( Color was a pretty Yellow-Gold (SRM = 4 - 5) with CANadian-quality clarity & now The Gelt Gang of Midas, Mammon & Croesus appeared to join the CANadian CANebration! Whotta party. Nose was actually not bad, when rating to style.

The adjunct that mars most, if not all, AALs is the inclusion of corn. I have loved Fritos corn chips since Kindergarten when I first had them as a snack, but I do NOT like the taste of corn in beer. It is an extender that traces its roots to illicit beer being made during Prohibition when anything & everything was fair game as far as ingredients were CANcerned.

Yes, there was a corn aspect to the nose, but I have encountered FAR worse with some like opening a bag of the aforementioned Fritos! 8=p This was on the low end of that f**ked-up spectrum. Mouthfeel was medium. The taste was more innocuous than anything else. It was light in flavor to the point that adjuncts were more of an afterthought than something with which to be CANcerned. I was kind of surprised at just how flavorless this seemed to me to be. My palate, as a self-avowed, self-described hophead, seemed to have evolved to the point that AALs are rendered simply ethereal. Not bad, just not destined for Guy Fieri's "Flavortown". Finish was crisp, dry & refreshing on this hot, hazy, humid CANada Day, which is just what they were shooting for. Sure, it's a flawed beer, but the style itself is flawed. Remember, Rate to Style & NOT to Taste, boys & girls!

Poured from a 16 oz. can. Has a very pale straw color with a 1/2 inch head. Smell is of grains, light sweetness. Taste is of malts, corn, light sweetness. Feels light bodied in the mouth and overall it ain't bad at this price point, and would probably be very refreshing most of the time, but it's a brutally cold February night in Ontario.

A fairly popular lager in my youth although at that time Red Cap ale was more popular (on tap) in London Ontario. I had this beer years ago after living in Germany for several months we travelled to England on a holiday and popped into a local for a pint. I noticed that they had Carling on tap and asked the barkeep if it similar to the Canadian Carling Black Label , he said that it was the same but brewed in Britain. I had a pint and was amazed that it had a continental flavour and tasted not at all like the Canadian Black Label, it was better.
But this is the Canadian brewed Black Label and this is a pretty basic macro American/Canadian adjunct lager. It looks, smells and tastes like a macro American/Canadian adjunct lager similar to all the other Canadian Macro lagers I may drink it on tap if it is the only thing there on tap but I won't be buying it in bottles or cans again! It is a cheap beer but I'd rather spend another 20 to 25 cents per can for a better European lager.

I had this beer years agi and never again. It had such a bad flavor. It literally tasted like the can. I finished only one beer but barely. I have a rule I can't dump a beer but I almost with this beer. The only thing I can say is that if you can find this beer, I don't think it is distributed in the USA anymore, it is usually dirt cheap. Run away from this beer.

It was my Dad's beer so I am biased, but not an awful cheap beer

This 'fine' beer tastes like aluminum. Even when in a glass bottle. So, if a soft, malleable yet determined, metallic taste is what you are after .... And, the price is oh-so-right. So, go ahead and fill the trunk. The mother-in-law is coming over for the weekend.

This is so bad I can not believe they still make it.

For many years it featured commercials with the line: Hey Mabel! Black Label.

The beer is light bodied and the mouthfeel is crisp, dry and refreshing.

This beer is not unlike Pabst, Coors Banquet, or other American/Canadian-style Lager beers.

For the style it's very well done. It would be great on hot days, at barbecues, picnics.

My first beer back in the seventies . It tasted like fresh run over skunk in a can .period.

Taste: Corny sweet taste with a cardboard and a grainy aftertaste.

So overall would I recommend it? Sure, nice budget beet.