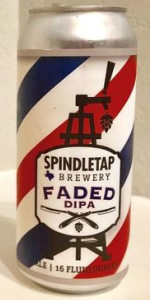 4.33/5  rDev +0.7%
look: 4.25 | smell: 4.25 | taste: 4.5 | feel: 4 | overall: 4.25
Notes from 5/23/2020.
Poured from a 16oz can into a Rastal nucleated Teku glass.
The body is cloudy yellow with 2 fingers of white head. Retention is good leaving a thick fluffy cap with some lacing.
The intensity of aroma is slightly above medium. There are notes of ripe mango, peach, grapefruit, and a little orange juice.
The intensity of taste is medium. The front palate is sweet with mango, peach, and a fruit I cannot place and quickly overtaken mid palate by hop bitterness. The alcohol is present mid palate but also gets washed away by the hop tide which is bursting with grapefruit in the finish.
The feel is slightly above medium in thickness. It's somewhat creamy, juicy, and has a medium-high astringency level.
Overall, the taste is outstanding. I would buy it again.

4/5  rDev -7%
look: 4 | smell: 4 | taste: 4 | feel: 4 | overall: 4
This was another beer that I picked up at an H-E-B Plus! in Texas when I was down in the Lone Star State not too long ago. I enjoy beers of this style and was thrilled to find one of these from a different part of the country, so I could see how it measured up to those from these parts.

Of course, this was cloudy as it had a murky goldenrod hue to it that was uniform in appearance. Enough frothy head topped it off as it settled pretty evenly, as the lacing left behind was nearly nonexistent. Lots of onion, tropical fruit, and dank grapefruit in the nose as the taste was just as spicy, sharp, and vegetal. The Mosaic was strong here as this was quite piercing with hints of stone fruit in the back, once this fully warmed up. Not a lot of carbonation to this although the body was full enough as the hops took their time to subside after every sip.

This had enough booze in it as it felt every bit as strong as it's listed 8%. Dated 2/25 with "HIGH AND TIGHT' written below that, this was fine on it's own but not as soft and pillowy as better examples from these parts. Loved the label with the colors of the Texas flag on it as this was a hair too much for a muggy summer's night such as this. Nothing wrong with this beer but one of these would be enough for a session!

Reviewed by beeragent from Texas

S - Slapped in the face with heavy fruity hop aroma of orange and tropical fruit from the Mosaic hops!

T - Hops easily dominate the flavor. Intense flavors of orange, like orange juice, along with a slight bitterness, again reminiscent of orange juice. The malts are there but overpowered by the hops.

O - Spindletap just kills it with their IPS's and DIPA's. The hops easily cover the 8% abv of this beer, making it highly drinkable and flavorful. Just amazing!!

Reviewed by Kgoldsbe from Colorado

Reviewed by Goneflying87 from California

Reviewed by JohnDon from Texas

3.93/5  rDev -8.6%
look: 4.5 | smell: 4 | taste: 3.75 | feel: 4 | overall: 4
Had on draft while at Spindletap. Before I begin the review, let me say that the rating may be hurt because I did not think this beer was as good as "Diamonds in my Mouth" or "Five % Tint" which I had during my visit. Look was the classic yellow gold haze. Smell was of citrus. Taste was citrusy and hoppy, a little more bitter then the previously mentioned beers. Feel was thick NEIPA. Overall a very good offering.
Oct 13, 2018
Rated: 4.25 by BdM from Netherlands

Smell is resiny cannabis paired with peach, rambutan and papaya before coming back to pungent weed.

Taste is pungent peach, dragonfruit and mango with some acidic skins and spicy, cannabic pine resin with a hint of crackery malt.

The chalky, chewy medium-light body has a firm, thin bubbly fizz before a powder dry finish.

Reviewed by LarryK from Texas

Reviewed by DaFinnMan from Texas

4.88/5  rDev +13.5%
look: 5 | smell: 4.5 | taste: 5 | feel: 5 | overall: 5
Spindle has stepped it up yet another notch. I had gotten used to plain ole excellent and almost expected to be disappointed after so many excellent NEIPAs. I thought "Oh, another Spindletap release". Not so. This stuff is fantastic. The most important element to me is taste. I had this can 5 days after release and it reminded me of sweet pineapple juice. Phenomenal and among their best. If there has to be a weakness I would say it's the nose which just happens to be excellent too. The look and mouthfeel are spot on. If you have had Houston Hazier, Tiny Gypsies, or Heavy Hands then you know what I'm talking about.
Sep 13, 2018
Rated: 4.5 by Can_has_beer from Texas

Reviewed by ilikebeer03 from Texas

Reviewed by jngrizzaffi from Texas