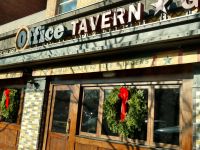 The vibe is good, and as mentioned above they shoot for the hip vibe and make it enjoyable going there. Theres a mixture of open seating by the bar, and tables for dining. TVs at the bar are on playing sports, and they'll change to a game for you if they're able to. Bartenders are all really nice, and the place doesn't get too loud where you can't hear your own conversations. Waiters for the most part are all really good and pleasant as well.

Food is a little more miss than hit here for me. They have a cool menu, but the food has just never wowed me before. Appetizers are more solid than the entrees, and the wings are probably the most solid of all.

And most important, the beer. My thoughts on the beer here is that the tap list is large, and does get some good (and really good) beers, but it lacks a little variety. The tap list is 80% IPA's on most days. Not that theres anything wrong with IPA's, and I know they're probably the best money makers, but you want a touch more variety in there (or at least I do). With that said, they do get some good beers, they rotate the taps, tap lines are clean, and the bartenders generally seem like that have a basic idea of what they're talking about when they recommend or talk about what they've tried and like.

All in all, definitely a fun place to go to. Nice mix of atmosphere and decent beer.

3.73/5  rDev +3.9%
vibe: 3.5 | quality: 3.75 | service: 3.75 | selection: 3.75 | food: 3.75
This Office location doesn't have as good a vibe as the one in Morristown or Cranford. It's somewhat dated inside. The menu is fairly pedestrian but the food is well prepared and the service is adequate. There is a reasonable selection of craft beers but not nearly as large as the Morristown location. This restaurant is fine for lunch but there are better options in Summit for dinner.
Jan 31, 2016

Reviewed by dorosjim from New Jersey

3.5/5  rDev -2.5%
Not a bad spot, they have a couple of rotating taps and lots of good mainstays. Pricing can range from ridiculously good to incredibly bad (I once paid $2 for Rogue Double Chocolate Stout and $10 for Southern Tier Pumpkin) The staff seems like a bunch of people that have worked there for years and know nothing about beer but whoever runs the place seems like they know craft is a thing and they always offer up some good stuff. Decent beer selection but great food. It's like a diner that offer sushi and pizza and they do it all well. As for atmosphere, the place gives off a divey feel witch is good or bad depending upon who you are (personally I like it) hopefully with the right bar management this bar can do great with craft
Oct 21, 2014
Rated: 3.5 by djrn2 from New Jersey

Reviewed by Buddha22 from Vermont

2.6/5  rDev -27.6%
vibe: 3 | quality: 2 | service: 3 | selection: 3 | food: 2
This place has a decent beer selection. Has some Stone, dogfish head, long trail, etc. However I got a long trail double bag that was month passed its serving date and then asked for a stone that was also a few weeks passed its best served date. It was very disappointing. For watching a football game it is not bad, but the tvs are not in prime spots and it can get a little crowded. If you are waiting for a train which is right across the street it is not a bad place to pass time and have a brew that hopefully is not passed the best served date.
Jan 21, 2011

Reviewed by jaywbigred from New Jersey

3.53/5  rDev -1.7%
vibe: 3 | quality: 3.5 | service: 3 | selection: 4.5 | food: 3
They have a great selection of less-commercially available beers, as most of the taps change frequently, and I have seen Dogfish Head, Flying Fish, Troegs, Victory, Stone, and Leffe Brune on tap here recently. Not many places in the area can compete with their selection (other than the other restaurants in the Office-group), esp. when you throw in the bottle menu.

Atmosphere and food are average-to-above average but serviceable. Great place to have a couple pints before or after your train gets in.

Reviewed by ejimhof from Pennsylvania

18 taps and 42 different bottles. Beer menu has a nice write up on beer styles.

Happy hour pints are $2 from 4-7 maybe the best deal in the country.

Food is decent. Prices are good. I had a Philly Cheesesteak which was very good.

Other nice touches are 2 computers hooked to the internet so you can browse for trivia,directions, etc. and several tv's for sports.