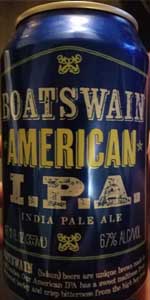 Lable says American IPA, vice Double IPA. Anyhow I poured this one into a standard pint glass, and the brew makes about finger thick head of light tan color, and the body is cleanly filtered and has a dark copper color.

The aroma is mostly sweet caramel and toffee, with a slight hint of piny hops.

In the taste I'm getting the sweet caramel flavors, with a mild fig flavor. Not really hoppy but for a hint of spruce...

Feels full in body, well carbonated, dry to the palate, and a slight alcohol warmth.

I'd just call this an American Strong Ale or something. This isn't an IPA, but not a bad tasting beer.

Folks, taste this beer blind. Seriously. I can't believe how reviewers are affected by a price tag and a label. This is a damn good beer - arguably the best value in generally available craft ales today. There is no doubt in my mind that with a different label and a higher price point folks on here would be lauding its clean balance of caramel sweetness and assertive but not over-the-top bitterness. Maybe it doesn't belong categorized as an American IPA, as it avoids the hop excess that defines the style, but it does deserve more appreciation than it is getting, being a well-balanced and flavorful pale ale. Try it again. With an open mind.

One of the most brutal ipas I've ever had. Pours a color that is darker than most, usually if you're gonna cheap out on an ipa, you cheap out all around, but here right away it looks like it might have more malt or at least a heavier degree of roasted malt than your average ipa. Its solidly orange and amber to even auburn. Small 1/6" white head. Aroma is totally devoid of dry hopping. There is a mighty metallic presence on the nose.

Taste, eee gad, this was all bitterness. Like maybe they found the highest alpha acid hop and used it. All bitterness. You don't even get grapefruit flavors here, its all copper penny and alcohol. And I don't mean like a boozy alcohol, I mean a rubbing alcohol type of melding with copper.

In terms of style, its disgusting and one of the worst ipas I've ever drunk.

Can't believe I'm trying another one of these Trader Joe's beers, after the revolting experience I had with the Boatswain Twin Screw Steamer Double IPA. This one can't possibly be any worse. From that perspective there's definitely room for improvement, but that's not saying much.

A: Hazy reddish copper brew, fizzy light brown head 1 finger high from a moderate pour. At least it looks like beer so far.

S: Immediately upon pouring it put up a decent amount of rough hop aroma, but this faded away too quickly for me to really get a handle on it. What's left is a clean semi-sweet light malty backbone with some raw starchy grain aspects. Smells almost like a cheap Euro Dortmunder/ Export lager. Hops are completely gone at this point, like a fart in the wind. At least it doesn't smell like asparagus piss like the last one did. (Sorry, still hung up on that nasty Twin Screw Steamer).

T: This is pretty rough. A tad bit of coarse malt and a mild generic hop, combined with an equal amount of green vegetable stuff and a really pungent EtOH peppery heat. Tons of fusels. Wow. Like half as nasty as the other one. Yes an improvement, but nowhere near enough of one that I'm glad to be drinking this. Borderline drainpour material. Really unrefined, raw, choppy. What a train wreck. Who the hell is making this stuff??

As it warms/ airs, counterintuitively, it seems to improve a bit. Maybe some of the offensive volatile stuff is burning away, who knows. A light syrupy sweetness emerges to balance out the raw grain. Some mildly tropical thing going on in the body. Not much hop still... just a tad bit of generic bittering hop in the finish, mixed up with the fusels and rubbing alcohol.

M: Unbelievable how poorly-hidden the EtOH is. It's only 6.7% but I'm pretty sure you could dilute rubbing alcohol down to this point with pure water and it'd go down more smoothly. Carbo is appropriate. At least it's not flat or overly fizzy, so at least I can give them that much.

355ml Can from California as a gift:
Dark, caramel amber with a clear body & a 0.5cm, foamy & off-white head with some lacing. The nose is strong but not overly hoppy, some caramel sweetness & biscuit malts helping with the balance then some citrus following on behind. The taste is a little unbalanced with a few malts & bitter hops again then an unusual sweetness that didn't really work well. The beer is well-carbonated & sharp but it was definitely missing something too.

Hazy dark orange, nearly brown. Thin patchy skim, no lace.
Apple juice and alcohol aroma, closer to malt liquor than an IPA.
Tastes gross, bitter apple seeds, alcohol, weird acrid aftertaste.
Slick and thin, aftertaste hangs on the palate and doesn’t go away.
Not even close to an IPA, pretty terrible and just a bad beer all around.
Not surprising as this is contract-brewed at Minhas.

12oz can no date, just a stupid code

Hard pour, big foam, amber-orange and clear, some very pretty lacing left on the glass, better looking than IPAs 4 times the price. Smells like rust water and alcohol - tastes like heavy malts and aromatic bittering hops. Pine is the defining hop characteristic, but there's not a ton of it, this is mostly a malt bomb apart from the bitterness

This isn't for the west-coast hop heads - more of an old-head classic representative of the style. And at $5 a sixer, how can you even begin to be critical?!

I feel like boatswain is best avoided and has become a hit/miss grocery outlet special... more often hit than miss.

Looks, smells and tasted OK on a good day; but most often it tastes like a cheap ipa coming up when it’s going down.

The ipa and the double ipa are not terrible but they taste and feel more like an esb to me. Very malt forward and not super hoppy. Not the greatest ipa but not a bad beer for the money

Interesting beer. As an IPA, it is very mediocre. Thin mouthfeel, weak nose, lacking in hoppy goodness. As a session type beer, labeled as an ESB instead of an IPA and considering it is $1.99 for a 22 oz bomber, this is not bad at all!!!!

Poured from a 22 oz bottle into a pint glass. Clear copper color, medium size fizzy white head with spotty lacing and average retention. The aroma is just not there as an IPA. Call it something else and it is more acceptable....light grassy and floral hops and a little biscuity/bready malt.

Taste is fine (as an ESB or Amber Ale, but not an IPA). Grassy and floral hops, some bitterness but not the hop bomb that the term AIPA conjures up. Nice balance between biscuity/toasty malt and the mild bitterness.

Mouthfeel is pretty thin for an IPA, more acceptable for another style. Nice balance, somewhat crisp and refreshing.

For a $1.99 22 ouncer, Trader Joe's has done pretty well. As a lawnmower beer/summer quencher...not bad at that price. Not a particularly impressive IPA though.

Another beer from Trader Joe's in a different label and bottle but it seems like the same old song: well priced but mediocre. I hope this is an exception, of which there are a few (Stockyard Stout comes to mind) but I probably shouldn't get my hopes up.

Color is correct, with a healthy bronze glaze and solid head and lacing. The nose is not quite on point however. i get no hops but instead a heavy dose of medium malts dense with alcohol and burnt brown sugar.

The flavor is similar. No hops to speak of but plenty of alcohol and burnt sugar. You definitely taste every drop of that 6.7%. There is some oily bitterness up front and the texture isn't bad but could could stand some thickening. This is a half decent American strong or double brown but what is IPA about this beer?