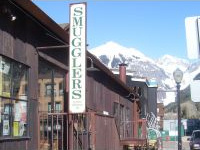 I came with my wife out to Mountain Village for her work. We arrived on the last day of ski season before everything shut down. Needless to say the whole town was a big party. We went to Smugglers because it was the only day I thought we would actually be in town. Place was packed, they had approximately 12 beers on tap. Downside was that they didn't offer flights. The beers I had were good, an Imperial Saison was up there with some of the better I have had, the IPA, not so much, but drinkable. The food started off well, appetizers were delivered timely and they were great. When the mains came, they were ok, my burger was overcooked, but was hungry so it was fine. I would have liked to have gone back and just sat at the bar and tried some more beers, but time didn't allow. I would definitely go back here again.

i really liked this place a lot, a telluride staple, with a great restaurant upstairs and the brewhouse located in the basement. looks like an older building, wood features, open layout, full bar, and seating for maybe near 100 people in a smallish space. they had six or seven beers on tap, including an excellent vanilla porter and session ipa, whicih i do not see listed here on their beer page. looks like they shuffle up the seasonals and one offs quite a bit too. the beers were not amazing, but all were more than acceptable. the more creative the better. i thought there marzen and ipa and more traditional styles were the least impressive. service was amazing, from the host who offered to show us around the brewery to our server who was nice and engaging and interesting. food was fantastic as well, i highly recommend the blackened crawfish mac and cheese, its amazing. other bites were also tasty, and out experience here overall was a fantastic one. when in telluride, this is absolutely a place to go have a couple of beers and a meal.

Had Dark Star seasonal. Was excellent.

Went in 2010, before I was into craft beer as much as I am today. It was a cool place with a great location one block from the main drag in Telluride. I love the town of Telluride and Smugglers had good food and decent beer. Nothing jumps out at me from 4 years ago, but we sat outside and enjoyed dinner there.

I walked in not knowing what to expect. The open-air feel and the wooden decor seemed comfortable and inviting, but it was also a bit kitschy and being in a tourist town like Telluride it could go either way.

Fortunately, it went the right direction. The beer was outstanding and the bartender who was pouring was a very pleasant young lady who knew her stuff. She guided my girlfriend and I through our "8-beer sampler", which ended up being an 11-beer sampler, with a friendly, down-to-earth professionalism that made the experience better.

One of the brewers also took a few moments out of his day to stop by, say hello and talk beer with us. Clearly, he is passionate about the craft and I expect more good things the next time I return. The Marauder (A Tribe Called Quest reference) was my favorite beer (and if you're reading this Smuggler's folks, BM me with the specs on it so I can add it and review it here for you) and the menu was extensive and generally tasty. The beer is still the star of the show though.

If you're in Telluride, this is a must. Glad I stopped in.

I just returned from a week's vacation in Telluride. On day 2 we decided we had to try the local brewery. luckily it was only 1/2 a block down, and WOW, it was not disappointing.
With 12 Beers on tap (they brew 16 on and off), good bar food, a veiw of the mountains, and decent service, this instantly became my wife and I's favorite brewery. We visited 3 times that week, had the 8 4oz samplers several times, and put down quite a few pints. The Ingram's IPA was my favorite, while the Wildcat Wheat was my wife's.
A must see if around this part of the country.

Staying in Telluride for the week and made my first of several trips over there to have some local brews. Setup as a bar/restaraunt.

The bar has several tvs, there were 12 beers on tap, and they also had liquor. Didn't see that they offered any macros. Long bar setup that had several people there. The season ended a few weeks ago so town is dead.

Great service, but again, things may be different in the offseason.

The food was okay. I only had the beer nuggets and wings. The nuggets are deep fried dough with red sauce. Okay...filling if you need some food in your stomach. The wings were okay. Frozen and deep fried with some sauce on them. Nothing outstanding.

I look forward to going back in the next few days to try more beers. Here's what's on tap now:

Also, their beers are served in cold glasses, so if you want room temp you should ask.

Stopped by Telluride on a long day trip to Mesa Verde and was more than pleasantly surprised. We unknowingly walked in just after 11am and ordered beers without realizing how early it was. Good thing I didn't listen to convention, because their beers are deliciously amazing. !Fourteen of their own brews on tap! I had a pint of their Saison (not one of their regular brews) and also sampled the Imperial Skyhop (Double IPA) which was maybe the best DoubleIPA I've tasted. I only had some of their appetizers, and they were pretty standard. The service was excellent and the bartender was knowledgable and helpful (but maybe because we were the only 3 in the place). Decor is standard Colorado microbrew, but I didnt come to look at pretty pictures anyway.

Smuggler's brews good beers! I had visited last year, and spent this whole year just waiting to go back to Telluride for Smugglers! If Telluride wasn't already fabulous, this would be reason alone to visit. The food is nothing special (except the Beer Nuggets, YUM!), the atmosphere is ok. The service, however, has really taken a dip since last year! Both times we visited last week the service was AWFUL, and kept us from visiting the next several days as planned (we ended up going to the Brown Dog instead, which serves a few of Smuggler's beers, with better service!). The waitresses we had were inattentive, VERY slow (well over 5 minutes to get a beer!!!). However, the bright side--WHAT FABULOUS BEER! To begin with the best, their Rocky Mtn. Rye is one of the best beers I have ever had, possibly THE best. WOW, I can't say enough, this beer is PERFECT! Their IPA is excellent, and they had a special Russell Kelly Pale Ale, which was PHENOMENAL, nearly as good as the Rye. IT'S WORTH THE DRIVE, go have some Rocky Mtn Rye!