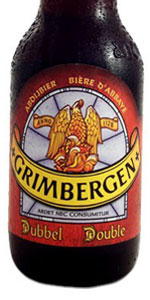 This arrived is a small scooner glass that had the Grimbergen logo imprinted on the glass. I had no prior knowledge of this beer and tried it basically because it was $2 off a pint. I was surprised by the fruity taste. I thought blueberry, no blackberry…then realized it was grape. It was a dark beer that had a good feel, but I kept concentrating on the grape taste. Eventually that wore off and I just enjoyed it.

I wouldn’t say it was my favorite, but it wasn’t bad.

Pours with a reasonably dense, initially three-finger thick, dirty tan colored head that sits atop a clear, dark, brownish amber colored beer. The aroma is quite sweet and fruity with the trio of prunes, figs and raisins being quite prominent. As I work my way through this beer it leaves a layered lacing pattern on the sides of my tulip glass. Underneath this is touch of caramelized, yet quite toasted malt. Despite the sweet fruity nose the beer smells quite light and airy, I would expect it to smell a bit "thicker", if that makes sense. The aroma certainly could use a bit more complexity, some more yeasty spiciness would definitely be welcome.

The beer is definitely quite sweet in the flavor department as well. There is a certain heft to the body that starts to coat the mouth a bit. The sweetness certainly plays up, and almost seems derived from, an intermingling of concentrated dark fruit notes. Sweet figs and raisins mix with caramelized malt sugars, a solid brown sugar note. This is really quite drinkable, for some reason I can't quite help myself from thinking of fruit juice. The alcohol is hidden pretty well, but that is because of the fruity sweet notes that dominate the flavor profile. This is certainly not objectionable, but could certainly gain from some complexity in the flavor department. This beer would be a good way to end a meal, sweet enough that it seems like desert, yet not so rich as to be a chore to finish after a good meal.

Man I remember this beer from back in the day when I thought BevMo was the most badass beer retailer around (i.e. the late 90s). Pours out a dark red and brown color, 1/3" off white head. Aroma of sweet oktoberfest like malts, marzeny and shit then a wave of mild dark, not overripe fruits.

Taste is relatively easy going, like an amber ale with a mild belgian yeast. Pretty approachable really. Has a bitterness that isn't from the hops but from that yeast that keeps dropping dark fruit references around your mouth. There is even some brown malt like dry chocolate in the mouth feel at the tail end.

I guess this one is balanced, the yeast isn't too pungent, the sweetness and dark fruit bitterness notes temper one another. Decent stuff, although its usually more than $10 a six pack.

This is a pretty nice dubbel that I had on tap. It looks very nice and undeniably Belgian. The nose is very yeasty with some doughy alcohol and spices. The flavor is a bit thin and very sweet. It is light-medium bodied with a lingering sweetness. Fairly drinkable though I feel like it could be more substantive, less sweet, and a little heftier. Didn't change my life, worth a shot if you've never had it and like Belgians.

Smells fruity with some light wisps of bread and chocolate. Bright and lively for the style.

Tastes quite nice, almost everything I look for in a dubbel. Plums and raisins in the front, more fruit and some bready yeast, finishing with refreshing fruit and some dry yeast.

Clear mahogany liquid, small light tan head. It quickly settles to a light skim, with a bit of lacing left behind.

The aroma is deep and complex: Mostly a caramel, burnt sugar aroma, but there's also something else in there, maybe bacon, maybe raspberries.

Caramel flavor, toasted bread, but also a hop bitterness that continues to be noticeable in the finish. Spicy hops. A touch of green apple tartness. As I get to the bottom of the glass a raisin and alcohol taste take over.

Mouthfeel is okay, a bit light for a dubbel.

Good beer, drinkable. The flavor isn't as rich as some dubbels, but everything there is well balanced.

Pours crimson with ruby hues. A thin, off-white head is well-retained and leaves lace on the glass.

The smell is of roasted dark grains, dark fruits, a touch of spiciness. Not too bad - quite restrained and un-dubbel-like.

Metalllic upfront. It subsides, but annoyingly hangs around. Sweet, but restrained. Some subtle perfumy notes come through. Sweet spiciness mixed in with sour. A touch of raw, fusel-like alcohol comes through a touch too much. A touch of wateriny thinness in the middle, followed by caramel sweetness.

The feel is light, fairly creamy and coating.

Not what I would expect from Belgium. The tinny characteristic, while mild, is annoying. The caramel aspect isn't bad, but seems too little, too late to really help, and it's rather one-dimensional to boot. The spiciness that I expect were muted. While it's true that it is at a fair price for a six-pack, I'll be skipping this one and splurge for something with more character.

This poured a dark brown (SRM30) with ruby highlights. A 1" tan head was supported by moderate carbonation. Lacing was moderate and persistent. Aroma is sweet malt and brown sugar with a low level of banana. Flavor was sweet malt (brown sugar) low bitterness and low banana. Full mouth feel with a slightly cloying finish.

What's not to love about this? I's thick and aromatic. The taste will cut through anything. It has bitter, sweet and sour all going at the same time.

The only problem with this great brew might be that there is too much going on. None of this is bad, and this is highly recommended, and I will buy it again.

The Grimbergen Dubbel is malty and spicy, with caramel and a slightly-drying finish. There are better Dubbels, but Grimbergen is an exemplar of the style.

I like the color and appearance of this beer. The nose (smell) isn't that pronounced - there's nothing bad, but its just not particularly strong, either - kind of bland in the smell department. The taste is good, though a bit sweeter than the typical dubbel if you ask me. Mouthfeel is good. I dinged it a bit on drinkability, because of the sweetness - the sweetness makes it hard to have several of them...

Appearance: Dark brown, with some red showing when it catches the light . Light caramel-colored head and lacing. Head disappeared slowly as I drank it but the lacing lasted much longer than the beer in the glass!

Smell: Fruity, malty and sweet. I just bought the six-pack in Los Angeles. When I was in Belgium, I was drinking so many beers that this one didn't necessarily stand out. I wished I had payed a bit more attention to some of the Dubbels, and not just the triples and sour beers. Very pleasant.

Taste: Sweet, caramel, fruity. A bit Sherry-ish. Tastes a lot like some of the Unibroue varieties I've been aging, but straight out of the glass, not a year later.

Mouthfeel: Maybe thinner feeling than some of the similar Belgian beers i've had? Round, long-lasting, slightly sticky on the tongue. Very pleasant overall.

Drinkability: Strong but surprisingly easy to drink. In the fall or winter, I could hang out with friends and drink this all night long. If I could last all night long.


Grimbergen Dubbel from Brouwerij Alken-Maes
Beer rating: 86 out of 100 with 1104 ratings