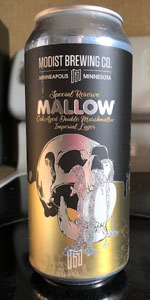 I don't see any date on the can or label. There is a pair of black marks on the edge of the bottom of the can but they appear only as smudged lines.

Appearance: The beer has a light gold body that is hazy enough to only allow dark fuzzy shadows through. It has a medium-large head that is fluffy and cloud-like. It slowly recedes to a short cap over the beer and it leaves nice sheets of lacing.

Aroma: Up first, a light alcohol aroma comes through. There is a light, spicy hop aroma. A very faint vanilla scent comes through

Taste: Up front there is a toasted note. In the middle there is a very mild hop flavor which comes across a little spicy and a little earthy, and there is a light hint of alcohol. Not much going on at the back of the tongue. Light earthy aftertaste. The alcohol flavor increases as the beer is consumed.

Mouthfeel: It feels light bodied and velvety smooth. It has a thick texture on the palate but then it finishes semi-dry. It's an interesting feeling beer because it feels thick while being light, somewhat like a foam but more pronounced.

Overall: There wasn't a lot going on with this beer aromatically or taste-wise. The label states that this is an "Oak-Aged Double Marshmallow Imperial Lager" and that it is an "IMPERIAL LAGER w/ PILSNER MALTS, MILK SUGAR, MARSHMALLOWS, AND VANILLA BEANS ADDED IN OUR OAK FOEDER." The oak character doesn't seem to come out unless it is just to mellow out the flavors. The vanilla comes through very softly in the aroma but it is missing from the flavor of the beer. The marshmallow doesn't come through, although the amazing texture of the beer actually felt a lot like a marshmallow. Aside from the great body, the beer felt pretty average as a whole and lacked a lot of flavor and aroma. I wouldn't buy it again if it were available and I wouldn't recommend it. There just isn't much going on in the beer.

Interesting lager ... More full and more full bodied than most ... Certainly getting the "marshmallow" under current ... Smooth to drink and the relatively high ABV is well disguised

I thought I would hate it but it's actually good.

Looks average, smells wanting, but this one is really good!

Part of the 2021 BeerAdvocate Virtual Extreme Beer Fest. Poured from a can into a tulip. Pours yellow orange with a fluffy white head. Smells of sweet grain with a little bit of marshmallow. Tastes of sweet cereal grain with slight marshmallow flavor. Beer is light bodied and very easy drinking, good carbonation. Overall, a very good beer.

Extreme beer fest
The marshmallow really works with the lager.

Can from Half-time/BA for EBF 2021. Pours a mostly straw yellow with a finger of foamy white head, that sticks around, great lacing, smell is nice cracker malts, marshmallow, vanilla, oak, hints of sour grassiness, taste follows the nose with cracker/bread malts, vanilla, marshmallow, and finishes with oak and a hint of grassy twang, feel is light to medium bodied soft crisp carbonation. A cream soda lager, nicely balanced, delicate sweetness, and still recognizable as a lager.

Pours slightly hay, mostly clear, light yellow, medium head. Smell is lager, a little oak, some lagery funk. Marshmallow is there basically only because I know it's an ingredient -- I wouldn't pick it out otherwise.

Taste is confusing. Some oak, some grass bitterness, definitely some marshmallow sweetness. Maybe too much sweetness. Might be some other sweetness. Vanilla is pretty clear.

Mouthfeel is medium to thick. Overall, it's a pretty good beer.

Golden colored lager, with a white frothy foam. The smell of vanilla is very much present. Flavor is creamy; somewhat like there is lactose sugar in there but does give the sense of marshmallows in the beer. I'd equate it to hot chocolate once marshmallows melt. The finish does give a slight musty nod to lager yeast.

A fun lager, and I do think the vanilla addition doesn't put it too far out the norm to be a niche beer.

Special Reserve Mallow from Modist Brewing Co.
Beer rating: 88 out of 100 with 69 ratings