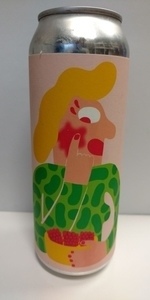 Smells of raspberries and cherries.

The taste is of raspberries and is very smooth only slightly sour.

Great feel to it, I keep drinking this.

Pours a murky light red, slightly darker than the color of a mostly pink raspberry. Makes a thin 1/4" off white, lighter pink head, not much for retention. Aroma was more raspberry and wheat sourness than it was coffee, this is not a coffee bomb.

Taste is similar to the raspberry ich bin berliner series for Mikkeller, but with a light coffee intrusion. Could actually be the same base beer. Certainly more of a summer beer. The raspberry doesn't quite have that same drying effect on the mouthfeel that it does in many other examples. Perhaps the coffee takes away from that drying effect, but its not like it compromises the beer. While it made me kind of wonder reading the label (coffee & raspberry? wtf is that?) I think it makes for a decent beer. Its not going to make me forget about Hottenroth anytime soon, but its a serviceable little beer that stays within style guidelines until the coffee comes in, which is relatively sparingly used. The sourness is in the average range for style.

Smell: Faint raspberry with hints of coffee that get a bit stronger as the beer warms

Taste: Faint raspberry tones with just a hint of coffee emerging; that flavors disappear into the finish

Overall: Not much of anything out of this one; forgettable

Canned 6/1/20. Poured into a Teku at fridge temp. Orangy pink color with a short lived fizzy head. Smell is an earthy raspberry. Taste is light raspberry, and mildly tart. Thin feel, mild carbonation. Solid, and good for a warm summer day, but unspectacular.

Raspberry Blush is the definition of a "hint" beer. It is the faintest hint of coffee and raspberry. I almost put it in the category of lo-cal beer on its overall profile.

This was quite an interesting Berliner Weisse from a great San Diego brewery. 8/16/19 date printed on can. I think it was the unique combination of flavors that first drew my attention. Pours a clear darker pink-orange color with just a thin cap of white head and minimal scant lingering lacing. Interesting aromas of tart ripe raspberries, strawberries, blueberries and then some medium roast coffee, oak and faint whiskey in the background. Tastes similarly, the light acidity of the coffee balanced fairly well with the tart ripe fruits, although I probably wouldn’t seek out this flavor combination in the future. I think I prefer these types of beers to just have mainly fruit in them. Smooth, mild mouthfeel that was not quite puckering. Good amount of carbonation. I’m not sure I’ve had this type of Berliner Weisse before.

This is a good fruited sour. It's Berliner-esque, and I had to search for the coffee notes, as the sour over plays the coffee for me. It's nose is very good nice finish, crisp. a nice treat.

Had this beer on tap at the local pub.. found it in cans afterwards at our local craft bottle shop. There's no words to describe... It's heaven in a can..

This has the look of a raspberry Berliner Weisse, rosy pink and hazy, with little head. Aroma is also standard with bright raspberry fruit except at the end some coffee slips through. Nice addition! Flavor is also raspberry forward, coffee only shows in the after taste which adds more to the mouthfeel with bitterness than anything else. It’s a fun idea that I wasn’t sure would work, but I’m glad I gave it a try!

Notes: 4.0% abv. Very hazy pink body beneath a short pinkish head. Average head retention and lacing, but that's expected of a Berliner-style weisse. It's mineralish and fruity with berry in the nose, but not particularly raspberry. The flavor brings in some sweetish malt to balance some acidity but it's not puckering. It's not too fruity, just a touch. Light to light-medium in body and crisp. Refreshing.