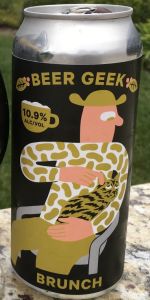 A: Poured from the can into a Piraat tulip/snifter-type glass. Body is motor-oil-black, with absolutely no indication of carbonation. Zero head.

T: Syrupy sweet, with a lot of coffee, burnt brown sugar, roasted barley and molasses. A bit too much, if truth be told, though the flavors are OK - I think it's just the utter lack of carbonation that sinks this one. Also: ABV heat on finish.

M: As noted above: totally flat. It needs some carbonation to "lift" or "lighten" this beer and it's not there at all. Definitely full-bodied. And slick and syrupy.

Wow, we get Mikkeller SD stuff in MA now? Who'd have ever thought that would happen? Not I, that's for sure. Anyway, this seems to be a bigger version of Beer Geek Breakfast, but I'm pretty sure I am more intimately familiar with it as a version of Beer Geek Brunch Weasel without the, well, weasel. So, there's no coffee excreted from a cat-like mammal in here. But there's definitely coffee in here. That explains why the price is fairly reasonable, I guess. I'm honestly more used to getting crazy stouts from Mikkel's brother Jeppe (via Evil Twin) these days, so let's see if this stands up to its close competition.

Anyway, this pours an utterly black color with a smallish ring of deep mocha foam capping off the proceedings. Though this fell out of the bottle as a very deep brown, it really does build up to an impenetrable and light-devouring overall pour. No real lace to speak of here, and only a little bit of an island of foam developing on the surface, but it looks pretty nice regardless. I think I would prefer it to be a bit more terrifying-looking upon initial pour to compete with some of Jeppe's big stouts... still good though!

The nose here is wonderful; deep, rich and chocolate-y with a definite roastiness and interesting elements... do I detect an almost biscotti-like almond note? Could it be that Mikkel's been inspired by the popularity of his brother's Imperial Biscotti Break? Not sure, and this is just speculation, but it really does seem that way upon my first few sniffs after letting this warm to room temperature. Additionally, it smells like warm, fresh-baked biscuits and maple oatmeal, with a luscious intensity that really does feel like it's putting breakfast right in my glass. Amazing!

Flavor is rich as expected, filled with big hits of dark roast espresso beans, dark chocolate, oatmeal and biscuity malts. The ABV is a little more obvious than I'd like it to be, but it's not a huge hassle. Just means that sipping this one here and there is the way to go, and it works a bit better at room temperature anyway. I would like to age one or two more of these, but I'm worried that the awesome coffee flavor would dissipate.

This drinks spectacularly, but it definitely tastes like an 11% beer, as I just mentioned. It has low-ish carbonation and an intentionally-heavy body (likely from the oats), but it never becomes a chore to drink. It's a total joy to make my way through this can, and I hope to see more from Mikkeller SD in my local Craft Beer Cellar soon! Like with a lot of breweries lately, however, I would like to see some can-dating going on. It doesn't bother me as much with stouts, but I've seen an APA and IPA from Mikkeller SD that aren't dated. This definitely needs to change. Other than that, though, this is a spectacular product that sits on a fairly-similar level to his brother's Imperial Biscotti Break. It's not as heavy in adjunct presence, but what it does with its relatively-simpler ingredients is quite awesome!

A: The beer is jet black in color. It poured with a quarter finger high tan head consisting of medium-sized bubbles that left a thin layer of bubbles covering the surface and a collar around the edge of the glass.
S: Faint aromas of dark malts and licorice are present in the nose.
T: The taste follows the smell and has flavors of black licorice with notes of coffee and a light amount of bitterness. No alcohol is perceptible.
M: It feels medium-bodied on the palate and has a moderate amount of carbonation. The oats don't really lend much in the way of smoothness.
O: The use of oatmeal makes this beer feel a lot lighter than you would have expected for a beer of this strength. It also hides its alcohol very well.

Attractive looking big stout. Aroma is a little off-putting. Sort a like a barnyard after a rain with some coffee in the background. Flavor is more like I expected but there still something off in the background. It is not infected but just a dirty flavor. I like the coffee but it could be stronger. Alcohol heat in the finish. Big body and smooth carbonation. Full and rich.

Appearance - Pours out thick and viscous, like warmed motor oil. Pure black with but the thinnest of brown edging where light can penetrate. The head is cocoa in color and peaks at about a half-finger's width. Fair retention results in a thin, broken layer of silky looking suds, thickening up into a ring around the edge of the glass. Not much for lacing, with a couple of broken lines making up the sum of it.

Taste - Follows the nose. Nutty coffee, roasted malt and more nuttiness. Underlying notes of chocolate and cream. Hints of caramel and earth emerge mid-taste. Touch of smoke in the finish. Aftertaste is slightly sweet with a chocolate emergence and a nice roasty undertone that fades slowly.

Overall - Man, this is a tasty ass beast. Well worth the $5/can I bought it for. More will be purchased. Oh yes.

Truly black pour and solid black in the glass with a dark brown finger of foam on top... Rich coffee with molasses and chocolate aromas preview this luxurious coffee stout experience - full of sweet molasses and chocolate syrup, spiked with black, roasted coffee and a maybe a hint of vanilla caramel... A superior stout leaning more sweet than dry, full-bodied and smooth, creamy and lush... Recommended...

I thought this stout was overall good except for the fact that it was too much coffee for me.

Flavor: Coffee, lots of dark roast coffee, and maybe some sweet chocolate. It has a long coffee/sweet aftertaste.

Poured from 16oz can into 20 oz tulip glass. No canning date, which is a bummer.
Look: Dark brown near black. No head formation. Some lacing on the glass, which lingered even as beer warmed.
Smell: Heavy notes of chocolate and malts, with small amount of coffee notes. Alcohol not present in smell.
Taste: Chocolate and malt, in a sweet way. The booze balances out the sweetness, but it isn't overly done. The alcohol is masked really well in this beer. Very pleasant taste. Low carbonation.
Feel: Feel is medium body and medium weight. As said above, low carbonation. Alcohol bit somewhat present on tongue.
Overall: I really enjoyed this. Chocolate and malt heavy, with some coffee. Not as coffee forward as the Breakfast variant, but it is more balanced. I prefer this to the Breakfast variant. Well done Mikkeller.