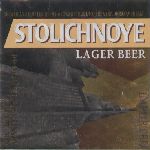 Notes:
View: Beers
Reviews: 9 | Ratings: 15 | Log in to view all ratings and sort
Reviews by TheLongBeachBum:

A present from a Russian colleague at work. Whenever we travel on business I always introduce my Structural Engineering friend to good beer if I can. In turn he rewarded me today with two Russian beers not typically found in the land of the free. This is the first of these beers.

Presentation: A 330ml ounce bottle that has an orange, brown and gold obverse label with a picture of a towering skyscraper that is right out of Fritz Langs Metropolis. Listed as Stolichnoye Lager Beer. The label proudly professes Imported and Product of Russia. Listed at 4.7% by Vol. The neck has some gold and bronze colored foil with the word C &#1051;&#1056;&#1045;&#1052;&#1048;&#1059;&#1052; Which means Premium. Strangely the foil on the upper neck does not cover the orange crown cap which also has the letter C, but stops just short.

Appearance: A dark golden body that is perfectly clear on the first pour and supports a decent white head that is around ½ thick at first but which settles to a thin covering after quite a short time.

Nose: Put me off a little to be honest, a corny odor that was all invading mixed with a sickly sweet grainy malt. Not that appetizing at all to be honest.

Taste: A little better than the nose would lend you to believe. A reasonably clean lager that is sweet in the middle with some biscuit malts a light hop character. Overall the sweet malts tend to dominate this Lager.

Mouthfeel: Rather thin, yet the sweet malts lend a backbone to this otherwise faded Lager. Dry and watery thin at the death.

Drinkability: Hmmm, this is not that bad, its just not that good either to be honest. Politely put, its not something I could handle more than one bottle of.

Overall: This style of beer, according to my Russian Work Colleague, is very typical and widely available. But this is not really my cup of tea to be honest. I must get my friend some Baltika #6 Porter in return and widen his horizons.

The color a deep gold with a modest frothy white head that is semi-creamy in texture with the resultant lace a velum like curtain to drape the glass. Nose is sweet malt, crisp and clean and the start somewhat sweet, minimal malt profile and the top skeletal in feel. Finish is meek in carbonation and the hops tame in their spiciness, dry aftertaste, just another watered down lager in my books, if nothing Im persistent, I will find one of these beers worth the effort.
Someday!

Another Moscow grocery store acquisition, this one comes in a brown 33cl bottle with a dark metallic label featuring a bunch of skyscrapers. "Stolichnoye" means "captial' - as in capital city. Gold foil wraps the neck. Rice is an ingredient. Best before 1/16/04, I opened it on 9/7/03.

Nice deep clear gold under a thin white head that fades quickly until it disappears completely, leaving no trace of film, collar or lace. Remarkable, actually, that it could go so completely. The nose isn't bad - touch of hops, a bit of malt, no hint of the rice. The flavor is downright pleasant - lots of malt, a bit of a hop bite in the finish. Aftertaste is nice and malty, with just a touch of unwelcome sweetness. Not a bad product, really, for what it is - a boring and utterly common style in Russia.

"Brewed by classic technology"
-Stolichnoe can

Ochakovo Stolichnoe is such a poster-friendly beer you'd think it was Photoshopped. Its yellow colour is so bright as to be almost eye-piercing and its clarity so neat and polished you'd think it had its own maid service. Even its bleach-white foam settles into a honeycomb-like structure that is suspiciously thick for something basically composed only of air.

The aroma smells no more like real beer than those Cyrillic letters on the can resemble real words - technically they are, but to me, they ain't. For me a lager should have a pure and wholesome graininess and maybe a whiff of floral hops; this smells like a blend of corn syrup and sugar. It smells like something a processed foods manufacturer would add to a children's cereal.

I challenge anyone to be able to tell the difference between this beer and virtually any other industrially-produced lager. Just to be clear, I'm fine with it being so homogenized. What I take issue with is what it's been homogenized to taste like. Mass-produced lagers have come to taste so insipid and yet somehow disagreeable - like solvent-y, soggy corn bread.

I understand why commercial lagers became so much sweeter - the use of corn syrup and other adjuncts as cheap sources of fermentable sugars - but I don't agree with it. I like my ice cream to be sweet and I prefer my beer to be bitter. Just because this technique saves money doesn't make it a good idea; it cheapens the product in more ways than just the one.

If it weren't for my personal quest to try every beer in the world there's no way I would have paid to drink Ochakovo Stolichnoe, certainly not after Ochakovo "Premium" Lager served only to teach me what a beer *shouldn't* taste like. I stand by what I said then: products like this have no business in the fridge of any self-respecting beer drinker. The sink, maybe...

Pours the standard pale golden-yellow colour, with a clear body that allows me to easily see the streams of effervescent bubbles racing to the surface. The pour generates an impressive layer of frothy, sparkling-white head, nearly two fingers thick at first. It soon seeps away, however, leaving behind a thinner, more manageable cap and collar. Not much in the way of lace. Typical aroma that offers nothing impressive or interesting - corn husk, adjunct sweetness, and some light pale malt graininess. Pretty weak, even by EPL standards.

Sadly, the taste doesn't really stray very far from that theme. I wouldn't call it outright offensive, but it's certainly below the mean. Corny adjunct sweetness is the most prominent flavour, with some accompanying grainy pale malts. There's a weak hint of weedy, vaguely grassy hops toward the finish, but it's not enough to cut through the overall sweetness of the flavour profile. Leaves behind a lingering, corn husk-y aftertaste. Light-bodied; definitely a thin, watery lager, which would be reasonably refreshing if it tasted better. This is not a beer to sip slowly and contemplate - finish the glass quickly, because it's not going to get any more appealing. In fact, it gets considerably worse.

Final Grade: 2.57, a forgettable C-. Ochakovo's Stolichnoe Premium has no real 'premium' qualities - it's a generic, industrial-style Russian lager that I probably wouldn't be able to distinguish from any number of domestic 'value' brands in a blind test. At $2.30 a can, I wouldn't really call this stuff a ripoff, but it's certainly something that most consumers (whether they're BAs or not) are likely better off skipping. Tolerable, but not much more than that, and certainly not something I plan to pick up again - do yourself a favour and get one of the superior (and cheaper!) German-style pilseners that crowd the shelves around here.

A: The beer is clear light yellow in color and has no visible carbonation. It poured with a quarter finger high white head that died down but never completely faded away.
S: There are light aromas of adjunct malts in the nose—corn seems to stand out in particular.
T: Like the smell, the taste has flavors of adjunct malts and a slight amount of bitterness.
M: It feels light- to medium-bodied on the palate and has a moderate amount of carbonation.
O: There’s nothing overly special about this beer, although it’s rather easy to drink.

A: Pours a clear very pale yellow in color with light amounts of visible carbonation. The beer has a three finger tall bright white head that reduces to a thick layer covering the entire surface of the beer. Significant lacing is observed.

S: Lots of adjunct malt aromas - both corn and grain- and almost no hop presence.

T: Flavor is dominated by the adjunct malts with both corn and grain detectable. Very sweet.

O: Easy to drink but not one of my favorite or go-to beers. I would describe this beer as pretty much average to just shy of average in all aspects. Probably not one I will bother to get again.

Yeah, the beer has changed its label and increased ABV to 5.0%. No rice in ingredients. What I see is a clear light yellow beer with moderate white head. Rather fresh, but relatively weak aroma of malts with hop hints. By the way, it's not typical for russian beers, and we see the beer is export. The taste is similar to aroma, more malty, less hop with strange aftertaste. Carbonation is low and the beer itself looks like a queer attempt to be non-russian, being russian in common.

Appearance - Clear yellow colour with an average size fizzy white coloured head. There is a low amount of carbonation showing and there is some fair lacing. The head lasted for about 3-4 minutes.

Taste & Mouth - There is an above average amount of carbonation and I can taste corn, very light hops, and bread/grains. There are also some grassy notes. It ends with a muted grainy yet slightly sweet aftertaste.

Overall – Not horrible by any means, but not a beer that leaves me wishing I had bought more. Wouldn't pick this up again.