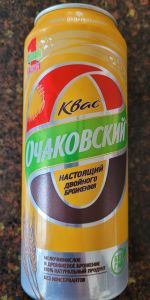 Pours dark brown, very little head or carbonation. Smell is grainy and musty (like...wet sweepings?), a little bit of ashiness, maybe some dark bread crust aroma. There is something super familiar about this smell that I just can't place.

Taste is sweet, like really sweet. Running toward sweetened grape juice and prunes maybe. Graininess is there, kind of.

Mouthfeel is medium, slick, smooth. Overall...I'm really, really not enjoying this. I'm dumping most of this glass and the rest of this bottle.

3.02/5  rDev +5.2%
look: 3 | smell: 3.5 | taste: 2.75 | feel: 3 | overall: 3
Pours a very dark brown that nets a black glass once full. No head formation. Aroma is sweet, hitting caramel and toffee right of the bat. Caramel and toffee lead into a sugary cola aroma. Rye and whole wheat bread are present throughout. Flavor profile is whole and rye wheat bread stirred and mashed into a glass of cola. Caramel, toffee, and some light spices give it a little extra depth, but overall it's very sugary. No discernible alcohol. Mouth feel is smooth, no fizziness or texture. It has a medium-thin consistency. Overall, sugary notes are abundant, and yet the rye and wheat beers make it seem somewhat healthy. Very unique.

2.5/5  rDev -12.9%
look: 2.5 | smell: 2.5 | taste: 2.5 | feel: 2.5 | overall: 2.5
Pours a deep, dark mahogany coloration with a reddish tint when held up to the light and a small, foamy head that quickly disintegrates to nothing. Smells of caramel malt, brown sugar and perhaps a hint of dark fruits. Taste is quite sweet and artificial, with notes of caramel malt, molasses and dark/red fruit: fig, redcurrant. There's a slightly tart lactic acid note to this as well, quite faint though. Finishes sickly sweet, with no discernible aftertaste. Thin mouthfeel with a watery body and medium carbonation.

This is not a beer, it's a soda. Kinda tastes like a cross between German Malzbier and Coca Cola, actually.

Reviewed by Ice_Cream_And_IPAs from New York

Look: Pours dark brown, with relatively thin head, even on the aggressive pour. Head is made up of non-uniform large bubbles, and dissipates very quickly.

Taste: Follows the nose. It's sweet, with notes of molasses, raisins, some dark fruit and yeast.

Feel: Body is quite watery, and highly carbonated.

Overall: This particular kvass is kind of like Budweiser is to beer. It carries most essential elements, but in a dull and cheap way. Growing up in Ukraine, I've had more kinds of kvass than I can remember, and comparatively, this is just weak. I honestly like kvass on tap, but did not want to another can right away. In any case, kvass is the Eastern European soda, and that's the expectation you should have when having one.

Huge aromas of horehound. Ipecac. Almost didn't want to try it due to possible projectile vomiting. Definitely some medicinal-sweet stuff going on. Molasses.

Taste is like if Mountain Dew came out with an anise flavor. Some sweet licorice/molasses, root beer, brown sugar, sugary sweet glazed raisin, rye bread. Much sweeter than I thought it would be. Extremely sweet.

Feel is watery and thin, with a light carbonation keeping it mildly interesting.

Overall, may be too sweet to finish, but it's better than being too bitter to finish. Not bad, not great.

Reviewed by Scott17Taylor from Iowa

This beer pours a clear, very dark amber-highlighted brown colour, with a very thin cap of mainly just wispy and bubbly dirty white head, which leaves some basic ocean plume lace around the glass as it quickly blows off.

The carbonation is barely there in its bored as shit frothiness, the body a so-so medium weight, and not particularly smooth, as all that musty sugary 'character' takes a large toll here. It finishes on the sweet side, in the same weird malt 'shoppe' way as previously mentioned.

Overall - I can't get over how this is considered palatable as an essentially 'no alcohol' beverage, by such a large swath of the world's population. It is saccharine, yet touched, in a really fucked-up manner. My handy-dandy tongue scraper is readily available, but it won't be necessary, as I am done, and the rest of this is (hopefully) going to help unclog my basement bathroom toilet, while I go procure a whisky, or something, gah.

dark brown body with small fizzy tan head which dissipates to just a ring. no lacing. despite the fizziness, no carbonation.

very strong aroma of beefy, bready, yeastiness. reminds me a bit of bovril, from England.

tastes like flat cola with a bottle of bovril mixed into it. not finding any rye.

thin on the mouth, meaty and yeasty on the finish.

overall, and its hard to judge this to style, it doesn't taste like any beer I've ever tried, and i did not care for it one bit. had to drain pour the last 8 ounces. still, it's style tick #101 on the road to 104. would not recommend or try this again. i did try to make my own kvass a couple years back, and while i didn't care for that either, it was still better than this.

Reviewed by Cthulhusquid from Washington

Look: Pretty much no head, very dark reddish-caramel body. Pretty much the same color as a scotch ale.

Feel: Medium-fullish body, nearly flat. Some sweetness, and a suggestion of tartness upfront that transitions to an off-dry finish.

Taste, holy shit, this sucks and is undrinkable. So much sweet cloying bitterness, seemed like they just put a bunch of foliage into a wood chipper, pureed that shit and dropped it in a batch.

A bunch of that dark fruit bitterness, the abv, while only 2% drinks like it is 20%. So harsh. Like they dumped the worst shit into a batch of bread, then took some plastic bottle vodka and boilermakered it.

Taste is a bit more balanced, there's almost a bready malt character to it, middle is raisin and fruit, finishes pretty clean with some molasses notes from the aroma, slightly sweet finish, but not as much as I expected.

Feel is pretty thin, a bit watery, not really any carbonation.

Overall, after reading the reviews I was a bit terrified, but in the end this is actually really tasty, I'd gladly drink it again and it reminds me of Poland, in a weird way. Even though this drink is Russian, it feels very Polish: homemade, served nary a degree below room temperature, and downright tasty. Na zdrowie!

Look - Cleary ruby with a two finger off white head that retains well enough to appreciate. Carbonation is not a factor since it doesn't look like it is quite there. Lacing retains in spotty marks around the glass.

Smell - Beefy but no like a rauchbier. More like beef flavoring you get with a package of ramen noodles. Milky as well...though not like a sweet stout, more sour and past its date.

Taste - Think beef ramen noodles put in sour low grade milk and you pretty much have this beer down. It is NOT pleasant.

Feel - Sour in a bad way though full without a hit of carbonation. Swallows easy though leaves a horrendous after taste.

Overall - Not sure what exactly they are doing in good ole Russian land but this was pretty awful. No wonder they prefer to drink vodka over this stuff. Will not seek out the few and far between American counterparts as I've had enough of this one for a lifetime.

3.25/5  rDev +13.2%
look: 3.25 | smell: 3.25 | taste: 3.25 | feel: 3.25 | overall: 3.25
It isn't beer, it isn't cola, it isn't alcoholic - it's kvass. I liked it, but not enough to want more. Opaque brown-black with a finger of dark tan foam that slipped away into a wispy collar. Lots of impressions on the nose and tongue - the most immediate being prune juice, cola, dark cherry, raisin, and vanilla... a little molasses and beet - medium-bodied - like a thickened cola, softly carbonated, some tingle; it tastes sticky but doesn't feel sticky. I don't know if other reviewers have more experience with kvass, that it has a "poor" overall rating, or if they just didn't like it. I doubt this was an artisanal representation of the style, but it was enjoyable enough. I'm giving it the benefit of the doubt.

2/15/22 edit: and I did come back to it anyway lol - and upon revisit, more enjoyable than I recalled - lighter, more tangy and brisk - juicier? I really enjoyed the revisit - paired it with meats and caviar and vodka and pickles - it was quite good...