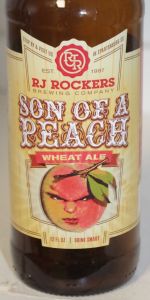 Notes: An unfiltered American wheat ale made with real mean peaches. The only thing missing is the fuzz. Savor the anger. Available during the late Spring and Summer months.
View: Beers
Reviews: 212 | Ratings: 796 | Log in to view all ratings and sort

Probably the best of the peach beers that I've had which makes sense since Spartanburg, S.C., is the center of the state's peach growing area and South Carolina grows the best peaches. It tastes the closest to real peaches of the ones that I've had

Surprisingly good! I wasn’t sure about this one, I don’t normally like fruit beers. Peach is definitely the star but not in an off putting way. They got it right with this one. Straw colored, and quite cloudy, with a clean white head that doesn’t stick-around. Peach also comes through in the aroma and I also get a sent of carnal.

This beer has a butterscotch color with a small head that dissipated quickly. It is unfiltered, so it is somewhat cloudy. Upon pouring, I noticed a very fresh natural peach aroma. A very pleasant aroma. It has a dominant fresh peach flavor; very fruity, but bitter. I also noticed a slight citrus flavor. Although I enjoyed this beer, It left an artificial aftertaste.

I've had this at the Brewery in a flight and I tried it again out of a can once before that. I thought maybe the can was flawed but it's just as bad from the brewery.

Smells of peach jolly rancher. Notes of band-aid and industrial antiseptic and peach flavored Orajel if that were thing. Feel is almost numbing but that is probably just a psychological reaction to the Orajel association.

This is a nice little brewery with many other respectable brews. Steer clear of this one unless you want to give it to someone as a prank.

This beer pours a golden color, with a minimal short lasting white head.
The nose is really peach smelling. Really not much else beyond that. The peach aroma is quite rich smelling.
Taste - I get the peach, but it also has a strange flavor that I really don't quite get. Quite hard to describe. It isn't the best flavor.
The body is moderate, and that strange flavor does stick in my throat.
This is a strange and bizarre beer. Not a big fan of it.

Hazy amber color, hints of tropical fruit on the nose, but very muted. Lightly structured IPA with a soft peach finish. Great for peach lovers, not a complex enough finish.

At the Tap House in Greenville SC. Not always a fruit beer fan, but this one was good. Says something (good? bad?) when my non-beer drinking companions liked the smell. It smells like peaches, first and foremost. And that's great. But after awhile, when what you really want is a good beer, I found the taste (and sweetness) a bit cloying. Again, not my style but definitely I'd try again and use to coax non-beer folks to try. A great introductory beverage to craft beer IMHO.

On tap:
Pours a nice golden, with a response ve but hidden head. Lacing is fleeting.

Nose has a peach note, nicely, but it's sitting on a sweet cardboard - like stale sweetened cereal.

Taste follows, but not as sweet initially. It builds up. A clay-like earthy note presents a little more than cardboard. The peach fights with a little tartness, but resigns itself to the aftertaste (along with a surprising light mint or pine note).

Feel was ok, but this was just not a beer for me. I can drink one, but getting through two would be a bit of a chore.

Cloudy golden amber. Nearly headless. Smelled some wheat funk at first, but then the peach took over. Very peachy and sweet swelling. Peach definitely dominated the taste, but it was a real and pleasant peach taste, not a fake or candy peach taste. Some wheat twang at the finish. Enjoyable for a fruit beer.

Pours cloudy, like most wheat ales, to a handsome golden color. Head is minimal. Aroma of peaches is slight, but pleasant. The taste of fresh peaches is unmistakable and pleasant, even for this guy who typically doesn't enjoy fruit in his brew. This is a nice change from the ordinary.

Overall: I will say, I initially thought this beer was going to be awful, the smell reminded me of vomit, but the taste is pretty damn good. I guess I would have this one again.

Good looking hazy brew. Scent of slight peaches with a sweet edge, I can't detect anything else. Flavor of peach and slight malt on the follow through but not overbearing and slightly sweet. Decently carbonated and crisp. Decent.

Son Of A Peach | RJ Rockers Brewing Company. Poured from the bottle into a pint glass, this beer's head is three fingers thick ,with solid lacing, and hazed medium gold body.

Son Of A Peach | RJ Rockers Brewing Company has merited a 4.5 rating IMO. Another gifted bottle from my good friend "irl", @nicholas2121

Son Of A Peach brewed by RJ Rockers Brewing Company, with an ABV of 6.00% This brew pours out a nice cloudy amber color with a mid sized white head. There is also a decent amount of lacing to this. It sticks real nice to the side of the glass. The smell of this brew rich with peach sweetness, grains and malts. You also pick up on a sight tartness in the smell. Between the look and smell this is one inviting brew. Now for the taste, it is rich with flavors. You first up the smoothness of wheat grains and a nice amount of malts. Then a nice mild peach flavor that ties everything together. There is a lot going on in this brew, there is nothing overpowering about about. Son Of A Peach is a real nice example of a fruit brew. It is really hard to pick up the 6.00% ABV in this brew, it just goes down that smooth. The mouth feel of Son Of A Peach is , Peachy, Bold, Smooth, Clean and Refreshing. Overall I'm giving this brew a 4.25 out of 5. I would highly recommend you looking this brew up. RJ Rockers Brewing Company, did a real nice job with this one.

The peach flavor is very strong, and right up front. It's a lot like eating peaches that are contained in a cup of syrup, but there's a bitterness at the end that kind of reins it in. It's a surprise, and it helps make the beer more rounded.

Cloudy, hazy orange on the pour. The smell is citrusy, peach candy ish and wheat. A nice amount of carbonation on the pour and on the mouth feel. A little dry on the finish and a nice taste of peach through out. Not too over powering to say the least. A very refreshing warm weather beer. A bit more heavy than most wheat , but not by too much. I enjoyed this beer. I would love to taste this on tap.

Received as an extra in a trade. Poured into my Duvel tulip.

T - Taste is similar to the nose, the peach is lightly sweet without nearly as much of a pop as the nose had. Loads of wheat along with a creamy wheat finish. The peach is by no means in the forefront, however, it does make it's presence known with subtle flavour. The wheat and peach create a light vanilla cream flavour.

M - Mouthfeel is lightly carbonated, body is a little on the heavy side.

O - Overall this was a rather solid wheat ale. The peach is very nice on the nose, wish it was a little more up front on the taste. Either way, this was a solid beer that would be great come summer time.

Single, twelve-ounce bottle. Aroma is faint peach with hints of citrus zest. Similar flavor with a flaky mouthfeel. Overall, quite drinkable, and especially thirst quenching, but flavor profile is substantially weakened by a lack of backbone.

Look: It pours cloudy orange with a white head.

Smell: It has aromas of peach and wheat.

Taste: It has flavors of peach, some orange, vanilla, and wheat.

Feel: It has a moderate feel with a dry moderately bitter finish that has a bit of astringent bite.

Overall, it is fruity but the finish throws it off.

Orangish apricot-colored beer, quite hazy, with a fairly generous white head that left some lacing on the glass. Nose dominated by fresh peach smell over some fairly mild yeast. Taste a blend of yeast, mild hops, and peach. Pleasant enough. Mouthfeel clean, unexceptional. Fun beer if you like peaches and hazy wheat beers. Had this from a bottle on 18 July, and the label said that it had been bottled on "06 14 16." I doubt this is one you'd want to let age.

Little head and only a couple of minute spots for lace. The liquid is a cloudy orange. Lots of yeast chunks at the bottom of the glass.

Peach is upfront and center on this beer. It's sweet with a children's aspirin like flavor. The finish has some bitterness come out. Yet, the aftertaste is short. Elevated carbonation with a moderate body. It's more refreshing than most and the combination of flavors seem to work decently. Later in the taste, I get a touch of cream.

From the bottle, it pours a hazy, lightly orangey amber with a small head. Peach is definitely in the nose. The taste is a bit sharp with the "mean peach" coming through. Interesting.