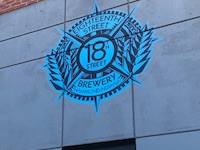 View: Place Reviews
Reviews: 10 | Ratings: 47 | Log in to view all ratings and sort
Reviews by GrumpyGas:

Large open-looking former manufacturing space with half walls separating the bar from the brewhouse and from more of a restaurant looking space. It's interesting to see City of Chicago flags in an Indiana establishment, but that's from where the brewers/owners hail.
All the beer is great. 9 house beers in 6 styles on tap and Zombie Dust as a guest all with reasonable prices.
Service was top notch. Our server was enthusiastic about the brewery and beer, well informed, willing to get questions answered, and was always closing with a great attitude.
I can't comment on the food, as I didn't have any, but it looked good and as with the beer the prices are right.

We stopped by on a hungover Sunday mid-morning, bleary eyed after a wedding reception the night before.

The first 18th Street location is in Gary, in a very Gary-like portion of Gary that entails more Garyness than most people would want to deal with. Nearby Hammond gets a bit of a bad rap, but their downtown area was savaged and abandoned so long ago that gentrification's been under way for nearly two decades. Like most of the Region, Hammond has a creepy Omega Man sorta feel to it: an urban landscape, complete with tall buildings, that is eerily wide open.

The new 18th Street is smack dab in the middle of downtown, right on popular cycling and dog-walking route. The facility is, of course, an old building that was formerly abandoned. It is huge. A giant bar, a giant production and tour area, and a giant, fenced-in patio that allows dogs.

18th's aesthetic is a clear replication of the Floyds and comes with all the appealing problematics of so-called alternative culture--people with fancy haircuts and lavish tattoos who profess extreme individualism but nonetheless worship authority ("You know who's really metal? Cops."). 18th's forced sense of faux alterity isn't nearly as aggressive as that of the Floyds, however. Unlike FFF, the bartenders at 18th Street are neither surly nor dismissive. The music isn't incredibly loud. And--best of all--you don't have to sit outside for an hour before you can get in.

The beer is worthy of the hype: throughly midwestern, 100% contemporary, but with the sort of craftsmanship and quality that's becoming more and more rare in startup breweries. The food is likewise a bunch of farm-to-table "chef inspired" nonsense but, unlike most similar such places, here it's actually worth what you pay.

Chill place with nice outdoor seating. Decent beer selection with my favorite being the Backyard politics. Food was average and server was friendly.

First off, this is a cool place. My main issue is that I thought it was going to be the coolest place I'd ever been, but, it wasn't. My expectations got the best of me. I just didn't like the beer I had or the beer I took home. The servers were nice, but not overly nice. Hammond is a terrifying spot. The food was great. If you are on the way to Chicago, then by all means stop by. I wouldn't make the drive in the way I would for a place like 3 Floyds.

This place is turning out high quality brews in bottles and cans and you also can fill your growler here.

Kinda dark and gloomy inside with what I'd describe as a heavy metelish kinda vibe..whatever, the food (I tried the tacos) and the Hoppy/fruity IPAs were on point...a friendly bartender and staff is always a plus....well worth a visit and not far from the interstate

Very cool reclaimed industrial/warehouse space with a tap room and kitchen. Great selection of taps and guest offerings. Plenty of to go options with usually cans and bottles, and growler fills for select brews. Service very good both times I've been, and a great chef-inspired food menu to go with the beers. An easy stop if you're going to or from Chicago from the east. Makes Calumet Avenue a must stop with 3 Floyds to the south!