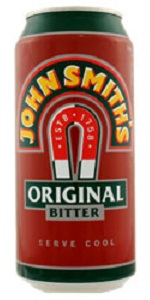 Notes: John Smith’s bitter, which is still going strong, is a malty, bitter sweet ale with a slight fruitiness and a bitter aftertaste – we probably took the words right out of your mouth. John Smith’s Original can be enjoyed in cans at home (3.6% ABV), plus there’s the Cask Ale available on the bar (3.8% ABV).
View: Beers
Reviews: 19 | Ratings: 36 | Log in to view all ratings and sort
Reviews by dheldman:

Unimpressed is the word. Very thin, stale, metallic bitterness, industrial taste with no standout flavours, pretty crappy, but had a nice head and lace....which was very surprising.

A good beer, very thick frothy head. Tastes good but not much flavor, and certainly not very bitter (which may not be a bad thing). Very drinkable.

This beer poured more of a dark golden color with a hint of ruby to it. It had a Guinness-like cascade to the head. Similarly to Guinness, the head adheared to the sides of the glass all the way down. The aroma was pretty non-descipt: inhale deeply enough and you got a twinge of malts and hops. The taste wasn't much better. Somewhat bitter, but not too much malt at all. No malt sweetness either. Of my week in England, this was the worst one that I had.

Had this some years ago and I seem to remember it as much better. Poured with a light tan, foamy, frothy, fluffy, textured head and lots of lace. Color is a very clear dark copper. Aroma is a little funky and hints of sulfhur. Some malt and hop. Flavors about the same. Certainly nothing special. Body's ok, carbonation is overdone. John Smith why hast thou forsaken me? Finish isn't too bad.

Originally reviewed February 19, 2005. 33cl Nitro-can. Decent rich brown amber pour, with copious white head and great lacing. Absolutely watery and lacking any true depth, hardly any flavor. I will admit that I have don't have much like for bitters, but this one should not be drunk, for almost any reason.

Poured from a 440mL can at a business class lounge in Heathrow airport. The beer was brilliant clear and copper colored, with a white sticky froth leaving some nice lacing on the glass. The smell was a little caramel, not much hops in the aroma. The taste was smooth, with little carbonation, caramel malty but with a just barely detectable bitter after-taste. The mouthfeel was very nice, it felt like a cask ale even out of the can, very easy to drink again and again I'm sure. It's just that I won't probably see it in the States.

Picked up a single can and Cystal & Lucketts.

Appearance: Pours a reddish amber colour with a tight & fluffy off white head. Lots of lace and lots of retention.

Aroma: Caramel dominant with floral hops, grass and general sweetness. Not that much here.

Final Statement: A quaffer english bitter. Not offensive, nothing to write home about. It was better on tap.

Pours a fairly deep reddish-copper with a reasonably thick off-white head that is fairly small, but lasts well and leaves plenty of lacing. Smell is fairly faint, with caramel and some butter showing. Taste, on the other hand, is quite full and rather idiosyncratic. It seems to me to be caramel and strong licorice, bordering on medicinal, but not at all unpleasant. Bitter for sure, and with a very unique character, I can see how someone wouldn't like it, but I rather do. Mouthfeel is decent, quite rich and with good carbonation, and drinkability is average. One of a kind, in my experience. I've never had anything quite like it, and I think it's reasonably good.

A - One finger of white head on an amber-brown body with good clarity. The head has good staying power and leaves thick lace on the glass.

S - Sweet malt with some toasted notes and light, musty hops. A hint of caramel and fruity yeast.

T - Sweet, toasty malt with lots of red apple notes from the yeast. Slight roasted quality in the finish and mild bitterness, otherwise quite clean.

D - Not bad, lots of toasty quality but a bit bland overall.

16oz can courtesy of ScrimshawFan. Into a 90 Shilling imperiall pint.

A: Pours a clear copper color with about an inch of off white head that sticks around nicely. A few small spots of lacing are left behind as the head recedes to a thin cap.

S: Kind of an odd smelling beer, a little bit of sulfur, and some caramel malts. A bit of wet dog in there too. As it warms it smells a bit better, but again just a malty, kind of odd smelling beer.

T: Light with a touch of caramel and a touch of roasted barley in there as well. Very subtle. Slightly sweet, quite grainy, and quite light. Just a touch of bitterness in the finish. Slightly smoky as well. Pretty watery, but not bad by any means.

O: Not a bad session beer, I could easily drink this all night. Its not insanely flavorful, but its way nicer than drinking a light adjunct lager.

I bought this beer in Germany along with a trusty Newcastle as an escape from the many German pilseners that dominate the German beer market. Boy, what a mistake.

Initially I was all for the beer, as it poured a nice dark amber/brown color with a nice, thick, off-white head. Smell was somewhat floral and grassy, nothing amazing, but nothing bad, either. The Germans I was dining with didn't particularly seen to enjoy the fragrance, though. I should've taken that as a sign.

As soon as I put the beer into my mouth, I couldn't believe the disappointment. The sweet malt character did not meld well with the bitterness at all, and the overall taste was nothing less than rotting vegetables. I wasn't even able to finish the beer.

Perhaps I just got a bad batch, or the can killed it, or my taste buds just weren't adjusted to it after so many German pilseners. That seems unlikely, though, as I had also been enjoying Altbier, Weizenbier, Doppelbock, Schwarzbier, and even more styles during a stint in Scandanavia. Therefore I must say that this beer, to me at least, was absolute rubbish.

Reddish brown/dark amber beer. Very thick head that lingers a long time--lots of lacing all the way around the glass.

Not much in the way of smell. There's just not much to describe.

Tastes of caramel, sweet malts and lots of bitterness on the finish. Not bad, but not great either. In fairness, I bought a 4-pack of this and it took me well over a week to finish all four.

Relatively thin mouthfeel--although that is typical for a traditional bitter. Not much to report.

I had to try it, as these are sooo common around here, but it's not one I'd seek out necesarily.

Can brought back from England by a friend. Pours clear light brown with hint of gold. Short white head.

Nose is a light smoke, light bacon character. Can find light undertones of coffee and chocolate when warm and if you really seek them out.

Mouthfeel is thin and watery. There is no "there" there.

Flavor is single dimensional "lightly malted water." This one is just about devoid of flavor whatsoever.

No reason to drink this unless water is unavailable and one my hydrate.

I had this with an Italian dinner in the New Forest. A typical bitter, but slightly above average. Served with a short head (to make sure you get the full pint), which quickly disappeared. A sweet malt smell, medium body, average color. I tasted hardly any carbonation, but it was quite drinkable.

smells a litte fermentaed apple and alot like cider really., hints of pepper i guess you could say.

very carbonatedwhich kindoff goes against being a bitter in my opinion. lots of weird clumpy lace looks chemically.

very mild but tastes like a bitterr its no esb but its def. more bitter than alot of the euro pale lagers of similar cost.

and marginally more refreshing than them also

its clearly not afraid of its bitterness which i respectit says serve cool rather than serve ice cold, which i like.

hints of spearmint and sweet cider.

A: poured from a 440 mL can into a glass, amber brown with a loose white head that lingers leaving little lacing, clear