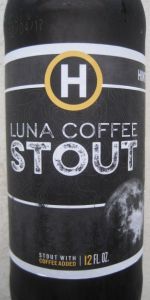 Wow...had this on tap at Dugan's in the West Loop, Chicago.

Appearance: Poured on nitro-tap. Cascaded beautifully. One of the best pours of a stout I've seen in quite some time.

Smell - Def get the Luna Coffee smell after I let the beer settle.

Taste - Very nice coffee flavor. Not over powering, but not lacking in flavor like some stouts.

Overall - I could drink this stout all day long.

If you haven't tried this one, go for it.

A - The pour creates a loosely packed, creamy tan head, which leaves adherent lace above the dark chocolate-colored beer.

T - The bold, full aroma suggests this beer to be heavier in flavor and feel, but it drinks quite the contrary. Tons of heavily roasted, black coffee builds in intensity but the dark malt of Luna wins out with overly roasted bitterness, hints of bittersweet chocolate, and a dry cocoa finish that almost tastes singed.

M - Luna's appearance and aroma will trick you into thinking that this beer will be a meal in the glass but it's body is no thicker than a cup of black coffee in the morning. Thin and flimsy, this stout boasts tons of coffee and roasted malt which brings too much acrid bitterness, but little heft to back up the powerful flavor.

O - Hinterland's Luna Coffee Stout makes a good first impression with it's aromatic scent of roasted malt and coffee but it's overuse is too much for such a small, light beer, overwhelming in flavor with little body or sweetness to compensate for the acrid bitterness. What I'd love to see in Luna is less roasted malt and more body-building, sweetness adding specialty maltiness such as caramel - it could add really nice balance and body without adding too much alcohol.

appearance: this one comes in the darkest shade of brown you can get, with a head that actually manages to last for a given amount of time. 4

Smell: This beer smells excellent: lots of heavy, thoroughly roasted coffee. Unfortunately, after this smell subsides, you get hit by hot estery brew, which reminds me of some of my earlier homebrew projects. it averages out to a 3

Taste: This beer comes off VERY dark. think bakers chocolate and dark roasted coffee beans. Very grainy, but enjoyable. If you can drink it that is. The carbonation is just plain offensive. Ive had bottle bombs that where easier to pour than this beer. its so bad, that I have to discount a LOT from taste. It also has a hot flavor behind the roastyness, so after you get used to the coffee, that's all you taste. 2

Mouthfeel: ahhhh the kicker in the room...this beer is viciously over-carbonated. I'm surprised it did not explode in the bottle. It easily has a higher carbonation level than a hefewisen, and has levels close to some of my first homebrew projects (of which DID explode). If it was bottle conditioned I'm SURE that it would had been a gusher (yeast on the bottom tends to catch carbonation bubble, and encourage an overall gusher of beer). Its vicious biting carbonation makes this beer almost undrinkable until a lengthy de-carbonation process (of swirling the beer around and watching huge flumes of beer bubbles rushing to the top of the bottle). The beer is almost unpourable except for the most skilled and careful pourers. 15. Almost a deal breaker.

Overal: This beer is a difficult one. It, at its core, Is a very well made coffee beer. I would actually put it just behind Kona pipeline porter (which still makes it worth trying) in terms of quality, but MY GOD. this stuff is so over-carbianted I'm surprised that the Global warming folks aren't trying to ban it for emmitiing too much CO2! it almost ruins the beer, and its downright sloppy for a professional brewery like this one. I'm giving this bottle the benefit of the doubt, but seriously, it was a huge disappointment to after coming home from work and having to deal with this mess!

A cautiously optimistic 2.75. Their might be a revision of the beer as i go through the rest of the 4-pint pack, and i can accept if my 4 pack was a dud or a mistake. But it cannot be forgiven. It is just simply sloppy brewing.

Id cautiously lump this into the "on Sale" category. Good for a once off try preferably if you can get it not-at-full-price. You might enjoy it at full price or at bar price, but youl be a lot happier if you paid less for it. However, if all batches are as carbonated as this one, Id push it to all the way "bad beer" category and tell ya to skip it.

You have been warned.

Id also lump this one in as being "just for beer geeks". Its too dark and roasty to be used as a gateway beer, and its aggressive carbiantion would not be helpful either...even for a coffee loving beer-geek initiate, I'm not seeing this one working as their first coffee beer.

Mouthfeel is smooth and creamy but on the watery side. Light carbonation.

This was a decent stout but not quite what I expected. Somewhat watery but great aroma. There are much better values out there. A disappointment from Green Bay brewery compared to their IPA and Saison.

Nice workman like coffee stout....ground coffee beans on the aroma...taste has a good java component and also some dark cocoa and roasted malts..

Body is medium...a bit of a creamy texture...finishes with a little astringency from the coffee..

A - Pours with an opaque black body topped by a nice one finger dark tan head. Good head retention and spotty lacing down the inside of my tulip.

T & M - A slight roasted malt body is accented by some dark chocolate notes and that same fresh coffee that I smelled in the aroma. The coffee doesn't come across with the harsh bitterness of some coffee brews. Medium bodied, finishing with a sort of mild coffee/chocolate aftertaste.

D - This is a very good example of a coffee stout, and my favorite so far from the Hinterland line. I'll be stocking this in my fridge in the near future!