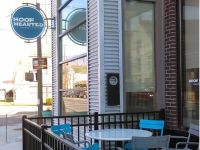 The place has a nice bunch of their products for sale (what you see on the web site plus brews). There is a nice big noisy bar area inside, decent bathrooms, and a quieter patio. All kind of intimate and a little crude (outside). The food and brews are high quality but there was not an over-abundant selection of either. But there is enough to make it a great experience. The wait staff seemed OK.

Recommended. We will hopefully be back.

Rated by not2quick from Missouri

Rated by Manta200 from Kentucky

Rated by mfreund7 from Massachusetts

4.03/5  rDev -2.4%
vibe: 4 | quality: 4 | service: 4 | selection: 4 | food: 4.25
Stopped in here since I was in the area and I've enjoyed the beers I've tried from them. The place is interesting, Not really sure how to describe it. The service seemed good to me. The selection wasn't very large which is a bummer. The food was good. The parking was a little sketchy, but I managed to find a spot. I'd consider going back in the future but I would also like to check out their other facility if possible.
Oct 02, 2017
Rated: 3.8 by ejimhof from Pennsylvania

2.64/5  rDev -36.1%
vibe: 2 | quality: 2.5 | service: 3 | selection: 2.75
Not sure if this place is a brew pub, or a millennial hipster training facility. This place is just weird all the way around. You feel like you are in an episode of The Jetsons. All of the douchebag vibe aside, the selection sucked. If it weren't for a few cans in the fridge, there would have been 3 beers to choose from. Staff seemed like they were more interested in partying than working, but were friendly. Parking is also a pain in the ass. Didn't get a chance to eat. Probably never will because I likely won't return. Go to the brewery in Marengo if you want to actually try a variety of beers and meet some real beer drinkers.
Jul 20, 2017
Rated: 4.5 by twrist from Ohio

Reviewed by CannedWaggoneer from Ohio

To explain the A&R Group thing, this is not a venture Hoof Hearted took on all themselves. It is a restaurant by A&R, who own many other bars around Columbus. They pretty much just put Hoof Hearted's branding on it and sell basically only their beer.

Inside the place is pieced together from left over building materials from the new Crest location on Parsons which opened just before HH. The bar top is the same marble, the shelving behind the bar is the same, only reworked a bit to fit; seating is similar. The food is basically The Crest's rough draft.

When you walk in there is a shoddy merchandise area that is also a hostess stand. There are usually two people at the hostess stand who are not paying attention to you as you walk in. Your best bet is to just blow past them, the fanny packs and the Tekus with fart clouds printed on them and seat yourself at the bar.

The bar top is always wet and dirty as the bartenders rarely keep up with cleaning, which I can't understand because the place is rarely busy. The seats at the bar are showing wear much faster than you'd expect. They are stained and fraying.

Selection is terrible. They don't have many taps, which is fine, but they make no attempt to utilize them adeptly. There's maybe 6 or 8 Hoof beers on. There might be one lazy kettle sour and 7 IPAs. Sure, they try to make you think they are different beers. One might be a "Farmhouse IPA", another a "Double IPA", a third may be a "Belgian IPA". The trouble is they all are very similar in color, aroma and taste.

Does all that sound bad? The service is even worse.

I've been here multiple times, and this review is an aggregate of all of my trips.
On one trip I ordered a beer they had on draft. The bartender (resplendent in a fanny pack and a snap back hat), reached into the cooler below the bar and produced a white plastic bucket from which she poured my beer. Some will say they were just having problems with the line foaming up the beer or whatever. Any real brewery would immediately stop serving that beer until the issue was rectified. Not at Hoof Hearted. They just pour a bunch of beer into a small bucket and set it, with no lid, in the cooler for what could be the entire day.

As we sat and suffered through our draft-not-draft beers the bartendress began pouring some liquid I could only imagine is beer or some other beverage intended to be served, from a large glass vase into a tall, long necked, narrow mouthed bottle. She did not use a funnel or anything so the reddish liquid spilled all over before she topped it off and placed it in the cooler. It was a grand act performed unabashedly before us.

I've spoken ad nauseum about their beers and their low quality, but it seems like the beers served here might be mostly brewed here and are of even lower quality than the slops slung out of Morengo. I've only eaten here once because I lose my appetite upon entering.

A detriment to the Columbus beer scene, an embarrassment to the people who pay $1300 to live in the building above and have to tell their friends to look for the "Who Farted" sign, and disgrace to the portfolio of A&R Creative Group who don't even claim it on their website.

Reviewed by wingedeel from Indiana

Our server, Ona was great. They had a ton of IPA's on, which was fine by me, as well as a full bar. I tried the Zipper Ripper,Equinox, and Mosaic, all were well above average. They had 9 of their own beers on, and a few guest taps.

I had the "5 day" wings, and they were fantastic. We were there during brunch so the wife got some hotcakes with home made sausage, which she loved.

All in all a don't miss stop, we will certainly return.

Reviewed by Swettenham_Shire from Ohio

Food menu is small, but has some highlights. Beer selection is decent, loved Wet When Slippery. With the glassware provided for Rose Gose and WWS, it looked like I was drinking juice.

Bob Ross on TV was a nice touch.

Reviewed by gopens44 from Virginia

3.88/5  rDev -6.1%
vibe: 3.5 | quality: 4 | service: 4 | selection: 3.5 | food: 4.5
My wife and I stopped here to have dinner and to try the beers that are so highly hyped. The pub is located inside a modern-styled building along a busy street in this neighborhood that is being rejuvenated. A small patio area is located at the front of the building, and a larger beer garden is at the rear. Free parking is available behind the building. A swimming pool is also located behind the building, but I didn't ask what the deal was with its access. The interior is very modern-styled too and is not fitting for a brewpub in my mind, hence the low Vibe score, regardless that there is a beer garden and that the brewing equipment is visible through a glass wall.

We ordered two sampler flights so that we could try all 8 of the beers that were on tap. (They also had two guest taps, one being a Drie Fonteinen offering). For all of the hype about the beers that this brewery produces, I'll have to admit to being let down a bit. Oh, all of them were very good beers so that we gave them an overall score of B (ironically just a hair below the beer average on the brewery's BA page), but maybe I expected too much.

The food menu is quite unique in its offerings, and we were very satisfied with the meals that we ordered. I'm giving the food an even higher grade than the beers. It's a great pub for both beer and food, and we'd stop again when we're back in the neighborhood.

Rated by Inglewood from Illinois