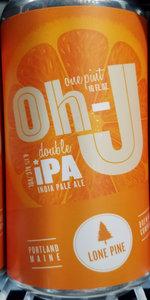 Pours a fairly hazy, deep straw color, with a thick white head, and a fair amount of suspended floaties, due to no filtration. Quite "clear" for a NEDIPA, but still a hazy beer. Like a dark wit.

Nose: Very unique. Surprisingly, the hops are more of an accent here, and if I were nosing this blind, would not guess this was an IPA. Lots of very clean, crackery wheat, some very expressive yeast, and very identifiable Citra notes. Actual orange rind, lemon rind, pomello, Douglas Fir needles, and some earthiness.

Palate: Immediately, it's made very clear that Lone Pine wasn't going for a typical New England "hazy" juice bomb here. No. This retains some very classic IPA elements, as well as some very unique traits that you don't normally see in modern IPAs. Initially, you get some sweet wheat. Very clean wheat grist - perhaps close to 100% wheat. Then, some clean, fresh, vibrant Citra notes of orange, lemon, lemongrass, and pine come in, playing very nicely off of the wheaty sweetness. It wants to become bitter, but it has a hard time pushing through. It slowly builds from the middle through the finish, but never becomes biting. That clean, wheat graininess persists into the finish, with very mild resinous oils coating the palate. With everything combined - the sweetness, the Citra hops, and the mild bitterness, I would actually compare this to fresh squeezed, unfiltered white grapefruit juice. I was apprehensive at first, but the deeper I get, the more I'm really seeing what they were going for, directionally, and I think they nailed it.

Mouthfeel/Body: The beer is medium light in body, and insanely crisp. I hate to give this much credit to anyone, but I think this is *the* most refreshing and drinkable double IPA I've had. This is a thirst quencher. There is some softness to it, and it isn't light as in "lite"...it's just airy and crisp and light on it's feet. Not watery. There's an average, slightly tingly effervescence pushing through the 8.1% ABV, furthering the crispness and drinkability.

Overall: Man, this is a weird one. I was expecting a milky, pillow, New England juice bomb. It's definitely juicy, no question, but I don't feel comfortable calling this a New England IPA. I need to give this credit solely for it's uniqueness. There's not much else like it. They aren't pandering to popularity. The beer looks like shit, it smells absolutely odd for an IPA, it's taste is entirely unconventional, and it's just weird... But man, does it grow on you. Props to Lone Pine for thinking outside the juice box, and taking a risk. This is a stylistic oddball, and you absolutely need to try it to understand. I think East Coast and West Coast IPA lovers alike can both fall in love with this - and if you know someone who doesn't enjoy IPAs or other hoppy beers, I think this is a beautiful starting point for them, and an absolutely must-try for anyone who just enjoys beer. A really nicely executed ale.

Oh-J pours a cloudy, somewhat thick orange juice color with a thick and creamy head. The smell is a big citrusy aroma with orange, grapefruit and a melon sweetness. Taste is big orange and citrus fruit including some zest with a medium mouthfeel.

Just had this on its birthday release at the brewery. The description and name promote mega citrus and the beer does not disappoint. I could be drinking a glass of ginger ale for all the alcohol notes which means there are none. This 8.1% is completely hidden away beneath exquisite sharp (yet pleasant) citrus notes. The flavor is a cross between eating a tangerine and giving a little nibble to the rind for a bery slight bitterness that is welcome and balances the fruit flavors.

This brewery has been growing in my esteem for some time. First Brightside IPA woke me up and made me pay attention to this little brewery in the Bayside neighborhood then they dropped Tessellation just to show they had the science down. I feel like this beer is their magnum opus. I've had Swish and Dinner and Heady Topper and the rest. I feel that this is the best DIPA I have ever had but I would like to let some time set in and go a couple rounds with Oh-J before I crown it. Right now, sitting in the pleasant tangerine wonderland they've brought to my senses it is hard to see myself seeking any other beer over this. An absolute masterpiece in brewing. This beer will become difficult to obtain very soon. Enjoy.....what a good time to enjoy brews as a Mainer.

16 oz can into chalice. No date.
Look is nice hazy yellow/orange. Smel is citrus with orange on top. Taste follows nose and has a funk at the end. Feel is light. Overall, not bad but I wouldn't seek it out.

Tastes like freshly squeezed orange with some bite from the peel. Hints of peach and mango, but orange and grapefruit dominate. White bread and grainy oats in the middle. The finish is lightly dry with a bit of grapefruit peel bitterness.

Creamy, but not gooey. Medium-light carbonation. Soft and silky.

Pours a hazy light gold with around a finger of frothy white head; decent retention yields a thin film of lace clinging to the glass along with a slight collar.

Mouthfeel gives off a prickly medium body, sticky and lightly tongue-coating, and with a soft carbonation; lingering herbal bittering with a touch of hop burn woven in to an otherwise refreshing, juicy burst into the finish.

Unique and polarizing hybridization of West Coast and New England-style IPAs. Juicy, abundantly fruity, but coursing with an almost funky underlying bitterness that can both clash and integrate with the profile sip-by-sip; a bit of an anomaly, but it works generally more than it doesn't.

Picked-up a four-pack of cans at Kappy's in Norwell for about seventeen dollars. Have had a few brews from these guys before. I have never been so torn about a review. From sip to sip it is very good to mediocre. Can't quite figure this beer out.

This thing is a dream. I cant speak, too busy with this fantastic bright yellow lusciously late hopped and even a crispness you love in the summer. Ya so, it's an 8.1% summer dream