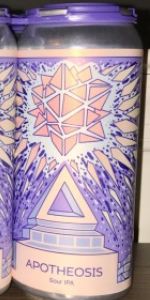 Super hype for these HVB beers currently huge thanks to a buddy who spent god knows how many hours in line to get himself a few four packs and was nice enough to get me one single can...thanks MIKE DG! (and KIM)

Delicious stuff with sweet grapefruit/pineapple notes, more sweet then the advertised "sour"...nearly a milkshake mouth feel...unusual, interesting, complex, different, well crafted..this will not be for everybody, especially west coast resiny IPA fans,,,but I'm happy to be able to get to try a can of this envelope stretching stuff

This one pours a very murky and hazy yellow, with a small head, and lots of lacing.

It also tastes very confusing. The flavoring I get most of is the vanilla, which lends a creamy and sweet character. It plays off the kettle lemony sour character well. There's a little bit of almond, and not much cinnamon. The Citra hops work well, and add a fresh mango and grapefruit character, and a hint of bitterness. The bitterness helps keep it from being too sweet.

This is creamy, and medium bodied, with a very high level of drinkability.

This is incredibly confusing, but it's still pretty tasty.

A: Par for the HVB sour IPA course... Murky deep orange with hints of pale yellow. Somewhere between orange, pineapple, and grapefruit juice, perhaps? Full on haze with a thin, compact head that dissipates to nothing rather quickly. As I swirl, the liquid leaves a film on the glass, possibly due to the lactose + residual sugar? Epitomizes this style of simultaneously mouth-watering and disgusting looking beer (I, for one, fall more heavily on the former!).

S: Cinnamon! More sweet Ceylon cinnamon in sugared up crumb cake form than raw, earthy Saigon-style sticks. Tart orchard fruits are right there too, along with a vague sugary sweetness and some cake-y malt that's likely accented by the vanilla. Lactic and yogurt-y as well. It all comes together in somewhere between apple-cinnamon oatmeal and rice pudding, and it rests on a wonderfully familiar base of bright, zesty citrus.

T: Wow! Citrus (Citra powder) is far more pronounced on the taste vs. the nose. Up front, it's all orange juice concentrate with pulp. Sweetened grapefruit juice too. Again, the lactic acid, cinnamon, vanilla, and sugary base come together to offer a very distinct rice pudding note right alongside that punch of citrus. Almond is subtle, but I think it emerges further as the liquid warms and amplifies that rice pudding / horchata perception. Cinnamon comes to the forefront on the finish and helps dry out the beer, which initially tastes quite sweet before finishing somewhere at the intersection of creamy, spicy, and pithy (think: drinking a masala chai made with almond milk after biting into an orange).

M: Thick and pillowy. Possibly the best mouthfeel they've achieved in the 6% sour IPA style. Perfectly balanced in it's journey from juicy sweetness --> lactic tartness --> rindy bitterness. As I near the end of 16oz, there is a noticeable degree of chalky dryness in the finish, likely due to the lupulin powder and/or cinnamon additions. But it's not unpleasant, and it actually works well, IMO, to check that rich sweetness up front.

O: Given my affinity for Multichorus and the resemblance (in description) of this beer to that one, I had supremely high, almost unrealistic expectations for this one. Like Multichorus, this beer does a wonderful job of showcasing its ingredients in a way such that no single aspect/component stands out among the rest. Rather, they all play well together and seem to fuse to offer tasting note far more complex than the individual parts! While I may have enjoyed Multichorus's play on "chai" a bit more, this beer takes that component and melds it really nicely with a strong citrus presence (both in juice and pith form). And the cinnamon works equally well with the base, IMO, really imitating "crumb cake" aromas to a scary degree. Overall, it's a delicious, fun, and very playful beer that would likely appeal to a broad audience!

Pours a hazy, milky yellow. A nice frothy shite head of foam that bubbles away quickly, leaving some thin lace.

The nose is tart and lemony. Grapefruit comes out, slightly bitter. On the back end that subtly sweet vanilla really comes out. Super interesting.

Wow, the tart qualities are similar to a kettle sour, tons of grapefruit juice. More sour lemons balance out a lingering sweetness. It tastes like candy, with a spiciness and vanilla presence that lingers. Never had anything like this, but I’m digging it.

Apotheosis from Hudson Valley Brewery
Beer rating: 96 out of 100 with 34 ratings