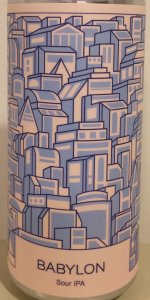 Super fruited up nose, sweet and near cloying, with notes of pineapple/grapefruit.

Again, this is on the sweet and fruity side, with more grapefruit juice and ripe pineapple coming forward.

On the palate, its sweet n fruity, smooth n tasty, complex and interesting....happy I had the chance to sample and review this stuff...thanks Mike DG and Kim for hooking me up

Pours a peach/pink. Heavy citrus and tart on the nose. Mouthfeel is slick with a nice tartness. Blood orange is heavy on the backend. Almost overbearing, maybe if aged a few months this would really shine. Still an excellent beer.

Appearance: 5 - This is a stunning beer. Looks like the inside of a red grapefruit. Fluffy white head hung out for a good long while.

Taste: 4 - plenty of citrus, more grapefruit than orange. Somewhat unpleasant musty undertones. Not as sour or as carbonated as I expected.

Mouth: 5 - delightful on the tongue. Lots of action. Almost hard to distinguish between the carbonation and the sourness, and the citrus for that matter. Well done.

Overall: 4 - a nicely crafted beer. I tend not to like beer with citrus fruit, but this one is quite a delight.

Stay safe out there, team.

A: That color! As with their other sour IPAs, Babylon pours hazy and thick with a thin, poorly retained head that recedes rather quickly. But again, that color! It's somewhere in the range of copper, like a deep orange mixed with a twinge of magenta. Definitely evident that there is some fruit additive in here... Similar to Amorphia in its reflection of the fruit adjunct's color, but not quite as intense. Pretty cool nonetheless.

S: Grass trimmings and an assortment of citrus beverages. Orange soda and lemonade. Fresh squeezed grapefruit juice. Galaxy pops in to keep it a little earthy, but it's an afterthought relative to the assortment of citrus. Unfortunately, it takes quite a bit of digging to pull out these notes, as the beer isn't nearly as aromatic as its ancestors/sibling in the HVB sour IPA lineage. But what's there is quite pleasant, so I'll give it a few points for that.

T: Well that's more like it--no lack of intensity on the flavor! Really wonderful soft blood orange flavor reminiscent of sorbet more than juice. Touch of tangerine and grapefruit as well, maybe some sweet lemon? It's basically all the citrus fruits, but without as much acidity and bitterness as you'd expect from their natural, fresh-squeezed forms. Lactose is clearly doing some heavy lifting to counterbalance, but it doesn't make its presence known unpleasantly. Malt base is sweet and just slightly creamy, a perfect table for the citrus onslaught delivery. Finishes a little lactic and a little pithy--that familiar greek yogurt note I get in these beers, but with some orange pith + zest thrown in.

M: Medium bodied with fine, even carbonation that effectively carries the balance of sweetness, acidity, and bitterness across the palate. The achievement here seems to be the mimicry of citrus soda/juice flavors with any of the aforementioned three sensations dominating, resulting in a beer that is high-impact while retaining high drinkability. Finish is dry and clean, and sweetness throughout is toned down relative to their other sour IPAs. It's almost refreshing!

O: No doubt the weakest sour IPA I've had from HVB, but in all honesty, what does that even mean? I'm still in awe of the style they have (are) created (creating), and held on its own without comparisons to Multichorus/Amorphia/Subglitch/Apotheosis, this would likely be pretty mind-blowing. But this feels simpler and a bit less inspired. It's too subtle on the nose, delicious--albeit straightforward--on the taste, and balanced in its execution. Assuming the brewers were going for a blood-orange-forward soft citrus explosion, they did a "good" job. So this one gets a "good" score.