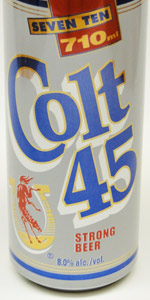 First sips, it's bad. A few sips later, it's so bad it's good. After a few more, it's so so-bad-it's-good that it circles right back round to plain bad again.

This is a high gravity version of Colt, ABV is 8.5%. The cans says "Colt 45 Malt Liquor High Gravity" and "WorksEveryTime". I plan on mixing this into a Clamato beer cocktail, but will review the beer by itself.

A moderate pour from the tallboy can produces a short-lived one inch head. It does have some stick to it. The beer is a pale golden and lightly carbonated.

The aroma and flavor actually emits slight tomato notes, somewhat like some malty lagers I've tried. There's definitely a fruity alcohol aroma, and a little bit of a corny DMS aroma, but not much. A little sweetness and tang on the finish. The flavor is overall rather neutral and bland, with no hop characteristics to speak of. Except for the boozy fruitiness, the alcohol is pretty well hidden.

This really isn't that bad. Of course, there's nothing exciting but nothing repugnant either. I think it'll make a fine tomato beer cocktail.