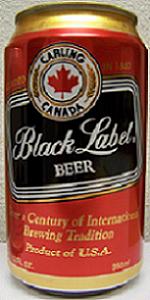 Notes: None
View: More Beers
Recent ratings and reviews. | Log in to view more ratings + sorting options.
2.12 by LesDewitt4beer from Minnesota on Nov 25, 2021

$4.99 Sixer at some random gas station in Toledo, Ohio. Never seen it but it waa priced alright and I am a member of the infamous " gotta try 'em all club ". Well, Here goes!.

Look - Golden without a head. Woah never seen that in an AAL. Dead carbonation. Welp.

Smell - Rotten sweaty sock. Ahh must be a Canadian lager.

Taste - Solvent and sweat. Pesticide riddled corn. Mineral water on the back end was at least acceptable.

Feel - Sticky and the sweetness ascends to ridiculousness. Fusel alcohol. Makes no sense at the ABV. Swallow induces a gag.

Overall - I drink more AAL than any other style. And this shit is downright bad. I don't care what fond memory you had on your fishing trip where your grandpa was throwing this shit back before telling you stories about Nam. If you see somebody drinking this slop, have an intervention. Yuck.

12oz cans stamped MAY 1319 poured into a hockey skate mug at fridge temp, no ABV indicated on can. The beer pours bright very light yellow with nearly white head. The head recedes to a single layer of bubbles and leaves a little lacing. The aroma is more corny and vegetable than anything. The taste is corny and wet, with a bit of tart. The mouthfeel is thin bodied, adequately carbonated and undry in the finish. There's a pronounced buttery/soapy aftertaste and feel that is not altogether inviting. Overall, not so good. This $8/12 pack takes me back to high school, but it will be a short visit.

Do not believe it was brewed by Pabst when I had it. Even Pabst couldn't have dragged this one down. The lone highlight, if you will, is that the beer has some taste. Kind of sweet and malty.
Not poor, but only a notch above it.

Pours a pale golden-straw in color, and as clear as can be.

Not much to go on in the nose or aroma segment. It’s inoffensive, neutral and “clean”, with malt character dominating the (very low in character, anyway) corn syrup. No hop presence whatsoever.

Light and somewhat crisp on the first sip. Sweetish. As with the nose, an inoffensive character, with little in the way of malt depth by which anyone might find interest or something to engage in, or even to recommend to another lover of characterful lager, real ale, or Craft Beer. Finish using the dry side, for what it’s worth.

“Boring and inoffensive” is not the sort of phrase I’d use to recommend a beer to anyone else, but in the right circumstances that’s exactly the sort of beer that’s called for, and Black Label fits the bill most of the time.

And it’s cheap, too! Well, a quarter or more higher in price than the lowliest of the low in the malt liquor category (211), but when you’re on a budget and want a brand to relax with but not get crunk on, this is a go-to — if you can even find it.*

Not recommended for people who have little sense of humor in an increasingly absurd world. For the fact is, with Taprooms opening on every block in every major city, it won’t be long before retailers will refuse to stock rubbish such as this, owing to the fact that there’s so much local Craft Beer in cans nowadays. Rejoice, motherxxxxxxx!

* (For some reason it’s got a presence in cold boxes in Minneapolis and Saint
Paul, which was not one of its original markets back when Carling and later Carling-National moved down from Canada to become a big player in the brewing industry in the U.S.A. The glory days of Mabel! But I digress.

At any rate, the market presence is probably due more to the consolidation of brands and brand swapping that went on when Heileman closed and Pabst and Miller split up some of the available brands.)

Well, this isn't horrible. It has a definite taste, which is saying a lot for an adjunct lager, which being a Canadian beer might explain that. Still it reminds me of a lot of a low level Euro lager, but not quite as appealing.

So I just moved to Maryland from North Carolina four days ago and while I am still pleased about most aspects of the move, the beer situation is dire. They don't sell beer in supermarkets, so you have to go to specialty beer/wine places that have limited selection and inflated prices. The first one I entered the other day was scaring me pricewise so I went (relatively) cheap and came home with a twelver of this unknown entity.

Pours super light colored, with very aggressive carbonation and a thin cap. Nose is light sweet malt. Inoffensive but uninspiring. Taste is a little corny but it's not significantly worse than standbys like PBR or Natty Boh. Aftertaste is reasonably clean. Again, you can't judge this against craft brew, but against the Stroh's and Keystones of the world, it's at least in the middle of the pack.

Poured from a 12 OZ can into a pint glass. The appearance is a clear golden yellow with a small white head. The aroma is grain and some sweet malt? The taste is smooth but lacks a lot of flavor. An average beer.

If you could have a beer flavored sparkling water, this would be it.

Straight up monster crushing with this beer. Best drank out of s box of longneck returnables for a maximum of $7 this beer will make your dreams come true with its balance of moderate fizziness balanced with easy drinking malt and a kiss of earthy hops. Keep reaching for the stars.

cheap beer for cheap drinking and getting drunk cheaply. had to drink it to say that i drank another iconic american lager beer. nothing fancy at all....

A mediocre mass produced beer, but it has a modicum of flavor