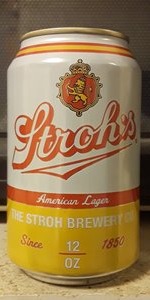 Notes: Stroh's American Lager is a full-bodied beer that upholds the Stroh family's rich brewing tradition and the Detroit spirit. Brewed in Milwaukee, WI with American grown Galena and Cascade hops, Stroh's American Lager delivers an excellence in taste that is balanced to perfection.
View: Beers
Reviews: 217 | Ratings: 634 | Log in to view all ratings and sort
Reviews by JimboBrews54:

When I drink this, I feel like it takes me back to the old days of Detroit. I am keeping the lions symbol no matter what the circumstances. It is that kind of firm stance that has led to this and many others making a come back. This along with our pride is the reason why the city gets back up and does not quit. This is like the Michigan version of Labatt, crisp, clean and refreshing.

I have a soft spot for Stroh’s as it was, in fact, my first beer. Selecting that royal blue can with the lion on the crest and thinking “It has a Lion on it, that means it’s probably good!” Looking back on it now I realize that there area very few things from Detroit that adorn a lion as part of their logo that can truly be classified as good.

Okay, Instead of the same old adjectives and rant's against this beer I will let you folks know about Stroh's. I worked there for 22 years. Its a macro-brew. Nuff said? Its like expecting Forest Gump to give a Nobel Prize winning dissertation on the Quark and its relevance to String Theory. Anyway....

As for the flame brewing..... All I can say is Bwahahahaha!! Our brew kettle's, the big beautiful beasts they were, were far from flamed up like our banjo burners at home. No, we had one single, laughable little burner under the kettle. It's flame was the equivalent of 10-15 candles. That was the extent of the fire brewing. 99.999% of the cooking process was steam injection.

It was good beer for the price. In today's market, the home brew people would love Stroh's, It used Cascade hops and kents Golding. It is hoppy for a macro brew with heavy citrus notes, think grapefruit, in the back end. It is a world better than the watered down water AB puts out as light beer.

I will be letting a few more secrets out about other Stroh's Beers in other reviews. ;)

Re-rate: 1/18/03: Hands-down my favorite, cheapie, macro-type beer. There is actual taste to this one. Pours out to a darker than usual gold for this style with a light aroma of grain. Taste is very refreshing and their is some actual hop and malt taste, albeit light, here. A staple of my 'fridge, next to Bell's Stout/Two-Hearted/Oberon.

12-14-01: When this beer was made in Detroit, it was hands-down better than other U.S. macros. When production shifted out of state, the taste suffered. Pabst has done a decent job of reviving it in recent years, but it is still a notch below what it was years ago. I still have a soft spot for this beer, but it isn't as widely available as it used to be. Good old Detroit Strohs was a very good American Lager.

Used to tend bar 30 yrs ago, and still carries the same taste and characteristics today. Was a very popular pour in the 'rust belt' region, mainly used to chase the after shift 'shot and a beer'. The price is about the same today as it was 30 yrs ago (I bought a 15 pack of cans for $8.49 in October 2014). Given that, it has weathered inflation better than most beers.

Aroma of mild malt with just a touch of floral hops.

Clean, simple flavors of good malt without sweetness rounded out by the hint of hops. Somewhat like a light beer in it's approach yet fuller bodied without any rough edges.

This is a good round with enough character to deserve respect. It's not a high tone beer nor does it pretend to be. Actually the lack of expressive language is refreshing on the rather plain yet slightly old fashioned label. A beer for a quick lunch when all you want is a beer with lunch.

It's no worse than anything else at the price. Why not drink the Detroit version of Bud?

This is a surprisingly good pale lager! Poured from 12-ounce can into a stemless wine glass. Clear pale yellow in color, with a nice soapy white head that hung around for a few moments before settling to a thin cap leaving some sticky lacing. This is well balanced, light, and easy on the palate. Light malt backbone, with grassy, herbal, and fruity notes. Low bitterness. Finish is mostly clean, with a hint of lingering fruity sweetness. Quite flavorful and refreshing. Pick up some for your next barbecue or beach party.

Not as bad as I had been anticipating. Here goes:

S: Not as bad as other AAL's. Sure, there's corn, but there are also substantial amounts of grassy pilsner hops and barley. Good.

T: Follows the nose. More hops than most AAL's. Corn is actually not very robust relative to most AAL's. Not bad.

O: OK beer. Would have over Bud, Miller, or Coors.

Let's be honest. If you are drinking Strohs, you know what you are getting into. It's not the best, but it's great as a easy drinking beer that can get the job done after 10. Plus it tastes way better than bud light.

This was my go-to beer while is was available in my locality. Cheap, as a beer should be, smells like a beer, tastes like a beer, and so on. Yes, the fire-brewed gimmick is probably not something that contributes to the taste, but the blue can is cool, and I have never regretted cracking one open. Perfect with a three-dollar frozen pizza for us poor folks, or for when you are hosting a big party and don't want to spend too much on the beer. I wish I could have one now. The last time I saw these is when I was in Michigan ten years ago. Glad to know that it is still around.

True story: In college, I purchased a 12 pack of Stroh's. I could only drink three of them. I gave the next six away to one person at a time (because no one would take a second one). I ended up pouring the last three down the drain after a year in the fridge. Make of that what you will.

Nice looking can. Stroh's pours your typical deep yellow with little head that dissipates quickly. Smell is mild sweet malts with a touch of grain. Mouthfeel is light with nice carbonation that isn't flat or fizzy, it's right in the middle. The taste is good with sweet malts on the tongue (not fizzy!) followed by a finish with decent hop presence and a litte sweetness. Not much complexity at all but certainly nothing that would offend. This beer is best enjoyed directly from the can as is PBR and Schlitz. Another one that is so much better than the big three. Many thanks to P.O. Box 739, Milwaukee WI, 53201 for a good value ($7.49 for a 15-pack).

Had this one at Green Dot Stables in Detroit -- you gotta check this place out if you're in the area.

As I had this from a bottle, I can't judge the appearance -- though I have seen pictures. Typical, average looking BMC-like beer. Not much to be said. Very average, indeed.

Smell: You get that adjunct smell. Corn. Weak, cheap malts. Nothing too appealing or special.

Taste: I got this expecting it to maybe be like a Blue Ribbon, but Stroh's pales in comparison. This is a drinkable, better-than-BMC macro that I wouldn't mind having again, but I'd definitely take a PBR over this one. PBR's hint of sweetness and seemingly better quality makes me choose that one over Stroh's.

This has a nice alcohol bite;in that it has it, then it doesn't. Unlike PBR. Second to Schlitz on my under '3.99sixthatI'llbuy' . Grainy, watered down obviously, but decent gold color with more 'flavor' than most in the genre. Excellent for cooking beer brats, beer chicken,etc...I dont know why but this is my preferred beer for cooking....also makes mean beer batter. Relatively low on the adjuncts compared to Bud Light/Busch/Busch Lt. It was better for some reason about 15 yrs ago...maybe it's my memory or I think someone said it used to be firebrewed...maybe that's it. Maybe it's the 'stronger' aroma and flavor than that of its' competitiors that I like...unlike Natty....when you drink stroh's....at least you know you're drinkin beer!

Stroh's pours your standard pale fizzy yellow into the mug. There's a thin, sudsy white head atop. It doesn't stick around long. The aroma is pretty bad, with grain and cereal coming through, and a sour smell pulling up the back end.

Well, this isn't the worst macro I've had. It's certainly smoother than your standard fare. Corn, cereal, and a slight sour taste dominate the flavor. All that said, the mouthfeel is actually ok (not overly fizzy, surprisingly), and the finish is tolerable. Really, this is an ok beer for barbecuing on a lazy summer day. But not something I'd have regularly.