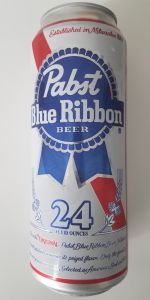 Notes: - Pabst Blue Ribbon is brewed in the finest traditions of an American Premium Lager dating back to 1844. Brewed with a combination of 2 & 6-row malted barley, select cereal grains and American and European hops, Pabst Blue Ribbon is fermented with a proprietary lager yeast. Our unique fermentation and maturation process results in a smooth, full bodied beer with a clean, crisp finish with a fine noble hop aroma.
- ABV% 4.74
- Calories 144

Reviewed by OzzyCoop from Pennsylvania

3.52/5  rDev +19.7%
look: 4 | smell: 3.25 | taste: 3.5 | feel: 3.5 | overall: 3.75
Yeah, my grandfather used to drink this stuff by the flat. Its a good one. It sits just above Genesse and the like in my opinion. I typically drink higher end IPAs and stouts but I grabbed a six pack of this on an impulse. I don't mind it. I would drink it mowing the lawn or digging a trench during the summer heat. Better than Coors by a mile. Better than MGD by a mile. Not heavy carbonated or heavy ABV so it goes well with the summer heat. Thick white head that clings to the glass and fizzles out after a few minutes. Colored light yellow like straw. Don't listen to the haters. It's not bad.
Jul 04, 2022
Rated: 2.92 by Sinister from New York

On the pour a 2 finger head forms which reduces relatively slowly for the style to ring around the rim and a covering of fine bubbles over the whole beer. Body is light gold a bit darker than bmc beers, but very similar. Relatively lazy carbonation for the style, and crystal clear.

Aroma is very light, but it seems like a good thing as there isn't a lot of malt or anything else going on. Some adjunct sweetness and generic lager aroma but nothing fantastic or notable. Possibly vaguely corny and chemically as well, but not disgusting.

Flavor follows the aroma with adjunct sweetness followed by some vague malts and corniness. The flavor then goes into its yeasty flavors which is dominated by a dry generic lager flavor with a bit of diacetyl thrown in for fun it seems. Not much is really off, but there is so little malt flavor that's all that really comes through.

Feel is not the best for the style either, head doesn't really return to give a creamy feel but rather has mostly carbonation bite leaving the beer feeling rather dense. Still light compared to other styles but the feel was all that was really left for this beer to redeem itself.

Overall it's boring with just enough off and no real redeeming qualities to make it one that I'm not going to come back to. No malt flavors and the adjunct "maltbill" is so obvious that it's not even funny. Feels like corn soda almost.

Rated by scotorum from Massachusetts

Reviewed by AJSeven from New Jersey

4/5  rDev +36.1%
look: 4 | smell: 4 | taste: 4 | feel: 4 | overall: 4
Really tired of craft beer snob betas giving this beer a low score. This beer is the best of the American Adjunct. It is less bubblegummy than Budweiser and less Sickeningly malty than High life. It’s dry corn flavor with great hop forwardness is what its all about (good luck finding hop flavor at all in Bud or Miller). Get off your hipster high horse and stop giving this beer a bandwagon bad rating. This is a good beer and you know it.
May 06, 2022
Rated: 3.06 by Chris7482 from Illinois

2.4/5  rDev -18.4%
look: 2.5 | smell: 2.5 | taste: 2.5 | feel: 2.5 | overall: 2
The problem with PBR is it tastes passable if weak. So it's easy to drink, but by the time you've gone through one or two tall boys your short-term responsible drinking allotment is done and all you've drank is more or less nothing in the flavor category.
A flat out bad beer you can't drink and just give up on. With PBR you keep trying and by the time you figure out it's a road to nowhere it's too late. Which makes it the beer I hate most in the world. My advice is to limit to 1 12 oz serving or dump those 4 last ounces from the tall boy on principle. Probably was better before megacorp X bought it.
May 01, 2022
Rated: 3.35 by BTexpress from Georgia

Reviewed by willpauer from Arizona

Overall: It's cheap and tastes like beer. 30-rack for less than an hour's wages. A day-drinking classic that will never go out of style.

Rated by Zopiac from Michigan

Rated by gehille from Pennsylvania

EDIT: decided to go on a bit of an adventure in this style category of late to see if I could find an AAL that tastes better than this to my palate...I've found a couple, but continue to revisit this baseline to recalibrate and it's always great.