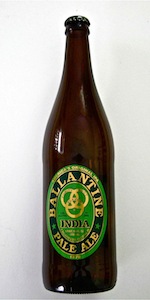 Notes: 750ml bottles are limited release but 12oz and draft are year-round.

I drank this solely because the beastie boys mentioned it, so thanks for nothing ad-rock... A very poor pale ale, let alone IPA, tastes like pbr but with twice the hops, corn syrup is the domaining flavor - total malt bomb. I can see why they had the beasties advertising for them, this stuff stinks

4.15/5  rDev +6.4%
look: 4 | smell: 4 | taste: 4.25 | feel: 4 | overall: 4.25
Retrospective review (written 2021) of a bottled ale tasted in about 2015/2016. (I did review the Burton Ale at the time and thought that one didn't hit the mark, tasting too much of alcohol.) Other reviews below describe well the specific style and flavor characteristics of this IPA. I felt the Ballantine IPA was an excellent beer, similar in style to (but better than) the Ballantine IPAs that Falstaff brewed in the 70s. How does it compare to the Newark-brewed Ballantine IPA that ended with the closure of the company in the early 70s? I never had that one. We can't really compare. It's too much to ask for a "re-creation" of a beer. It's enough to have a fine contemporary beer that hits the style notes of the original, using modern available malts, hops, and yeast. There aren't many available beers left in this style. It's too bad that Ballantine IPA didn't find a wider audience.
Oct 02, 2021
Rated: 3.87 by smi69 from New York

From the Bottle: "America's Original IPA Since 1878"; "Purity[,] Body[,] Flavor"; "First introduced in America in the late 1800s, Ballantine IPA was a beer for connoisseurs. It has been credited as an inspirational influence for the present day craft beer revolution in America. Handcrafted by our master brewers, this delightfully hoppy brew resurrects its deep heritage and storied past to embody an IPA worthy of the Ballentine name. For well over a century, the interlocking Borromean Rings showcased on our label have come to signify Purity, Body, & Flavor, just like the delicious Ballentine IPA inside. We hope you enjoy it!"

I Pop!ped the cap on this gorgeous 750-ml Bottle, thinking that if they truly did discontinue it, that's a shame. I started a slow, gentle C-Line pour into the awaiting glass, holding back tears at the thought of its loss. It foamed up nicely to form two-plus fingers of dense, foamy, rocky, tawny head with very good retention, leaving lots of lacing as a memento. Color was Deep-Amber/Light-Copper to Copper (SRM = > 13, < 17) with NE-quality clarity. Nose had an earthy pungency, like a wet hop AIPA or one that utilizes English malts with PNW hops. I got a distinct pine woodiness along with a freshly-turned soil quality. Hmm. Mouthfeel was medium-to-full, not quite creamy, but definitely big for an AIPA. It had a pleasant earthy bitterness, again, more akin to a wet hopped AIPA. it really seemed to straddle the boundary between an EIPA & an AIPA. It was not as malty as the former tend to be but it was not as bitter as the latter can often be. I am not disputing their 70 IBUS, but I just was not getting that level of intensity. It actually finished quite dry & I found myself reaching for water after nearly each sip. It had a definite woody quality that lingered well past the swallow. Yum. YMMV.

I also want to take a moment to plug "Hops and Glory: One Man's Search for the Beer that Built the British Empire" by Dan Brown ( https://www.goodreads.com/book/show/7262208-hops-and-glory ). In it, he commingles history, nautical lore, humor & a present-day misadventure, all while expounding on the origin & evolution of IPAs.

Reviewed by Sadsack from Massachusetts

4.19/5  rDev +7.4%
look: 4 | smell: 5 | taste: 4 | feel: 3.5 | overall: 4
Abit syrupy but I liked it. Received this unfortunate news from Pabst:
Regrettably this product was discontinued for large scale brewing. Ballantine IPA is currently only brewed on rotation at our Pabst Milwaukee Brewery and only available locally at the tap house.
Jul 25, 2018
Rated: 4.08 by Khaack from New York

3.53/5  rDev -9.5%
look: 4 | smell: 3.5 | taste: 3.5 | feel: 3.5 | overall: 3.5
The appearance was a nice looking hazy bronzed yellow to orange color with a one finger white foamy head that dissipated within about a minute leaving some light lacing sticking and then sliding down into the beer. The smell had a decent arrangement of balanced citrus to piney hops intertwining with the caramel malts. The taste came across bittersweet citrus hops with the caramel malts here and there. There’s a light sweet caramel to bitter citrus aftertaste leading to a semi-wet finish. On the palate, this one sat about a light to medium on the body with a fairly decent sessionability about it. The carbonation hits but isn’t overbearing. Decent harshness runs over my tongue. Overall, I say this was a pretty good AIPA that I would have again.
Jul 09, 2017

Smell is lemon and then lighter pine and earthy hops, moderate malt nose, hint of caramel.

Taste is more malt forward than the aroma: light toast, moderate caramel, sweeter than many ipas; hops then take over with floral/herbal notes, lighter pine, earth, and citrus.

Mouthfeel is a tad sharp from carbonation, then lingering sweetness and following bitter presence.

Overall a very solid IPA from Pabst - when will it be canned?

APPEARANCE: Pours a good ~8cm worth of off-white foam. Has a nice consistency to it - soft, smooth, full, and even, billowing out of the top of my nonic nicely. Retention is impressive for the high ABV - ~10 minutes.

Body is a clear copper - very conventional to and typical of the IPA style as it has been classically known (before this recent unfiltered IPA bollocks). Obviously filtered, lacking any visible lees/yeast within.

In short, it's a classic appearance for an IPA and I'm eager to give the beer a go, though it's worth noting the body could offer more vibrance.

AROMA: Floral hops dominate, with some fruity esters from the ale yeast bouncing around in there too. I'd guess at Centennial and Chinook if pressed, but it's also resinous and faintly piney so I wouldn't rule out Amarillo or even Cascade. I don't find any onion, so Simcoe is out. There's no new world tropical nonsense here - just a classic floral hop emphasis.

Malt aromatics are a bit darker than I expected; it's not merely pale, but drifts into graham cracker and biscuit aromatics, betraying perhaps an English emphasis.

This aroma suggests what I imagine a 1980s IPA would have smelled like, which is I suppose true to Pabst's re-release imitation of this historical ale. True, the hop profile could be better (more fruity flavours, more resins, maybe less pine, and more overall pungency) and the malts could be toned down a bit, but overall it's pleasant and appealing.

TASTE & TEXTURE: Coating and medium-bodied, playing a bit into the almost candied sweet malt backbone. And it's a sweeter malt foundation than you'd expect in an IPA, bringing graham crackery malts, pale malts, caramalts, and maybe even a bit of amber malt into the fold, offering quite a few sugars for the hop bitterness to compete with...

...And compete the hops do. Classic floral hops, a blip of fruity flavour, some piney character, a little resinous flavour...this is shockingly diverse in terms of hop flavour and surprisingly pungent not only for a beer brewed by Pabst but also for a beer meant to emulate an IPA which has such an old recipe.

I could absolutely see a contemporary self-described "craft beer fan" as loving the shit out of this in a blind tasting, and I don't mean that facetiously...it's nice stuff, nevermind the brand or owner.

Okay, it's a biteen too sweet for me to call it truly well-balanced, but it's adequately complex even by contemporary standards and offers more hop variety than many locally brewed IPAs I've tried recently.

Texture is apt for the style: smooth, wet, adequately thick, not too hefty or heavy, well-carbonated. Not sticky, syrupy, or watery (as might rightly be feared in a Pabst-brewed beer). The mouthfeel doesn't accentuate specific flavours or elevate the beer as a whole, but it's well within style conventions and doesn't interfere with or disrupt the taste.

OVERALL: A shockingly competent IPA from Pabst, a company whose beers I generally despise but which happens to have gotten things right within the historical Ballantine brand. I do like this, but as tasty as it is I can't say I'd pay $13 per sixer again for it...that's on par with Sculpin if you know where to look in the city. I'm glad I got to try it once, and would advise others to do the same, not only to support these kinds of historical beer recreations but also because hey, it's pretty tasty stuff.

Reviewed by Ferretferret from Wisconsin

Smell - The nose had a grassy profile with some sweet hints.

Taste - Compared to the modern IPA, this seems rather mild. There is a light grassy bitterness with noted sweetness from the malt backbone. The profile fairly constant.

Mouthfeel- There is a reasonable amount of viscosity for the style. This is a far cry from hop-water.

Overall - Some call this a classic. Some classics don't age as well as others.

Reviewed by tjwarren from Ohio

4.64/5  rDev +19%
look: 4.5 | smell: 4.25 | taste: 5 | feel: 4.5 | overall: 4.5
Way too drinkable. Seductive orange pour. Floral citrus aroma. Taste is citrus fruit orange. Smooth easy drinking. You are almost disappointed in the bitterness and then after it is gone the bitterness hits you with very pleasantly drying the finish perfectly. Mouthfeel is lush. I really enjoyed this. It is not a copy cat IPA but something truly worthy. Bravo Pabst.
Apr 23, 2017
Rated: 4 by DMc8ride from California

Reviewed by Evilyak from Minnesota

nose and mouth are flowers and pine. citrus bite towards the end.

mouth is a little creamy and moderate carbonation.

what a nice, comfortable IPA. the kind of thing you can come back to time and again.

A: Dark orange, good clarity, with a soft, lesiure rise of effervesce. Milky beige head, 0.25 inches, nicely retaining, with a respectable amount of film coating on the vessel.

T: Toasty malt, nice citrusy and herbaceous hops with some lemon-sage muskiness. Piney flowery hops, parsley, grapefruit grind that provides a nice bite with a very good level of strength on the swallow.

Rated by IPA1978 from Missouri