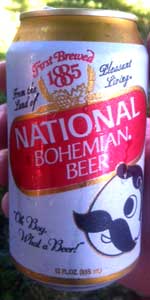 Brought this back from East Coast, haven't rated, although it was one of my go to beers in my youth. Initial corny, vegetable smell gives way to a normal, although bland, taste. And then nothing, not even a finish. Decent mouth feel rescues this from a less than honorable rating. Here's to days gone by!

Poured a very light straw color with 1 finger head that disappeared quickly. Light lacing. Aroma is almost non-existent. Very light malt. Taste? Just a slight taste of malt and biscuit. Hops? Oh . . . hops . . . where are you? And yet, eating a dog at the O's game or eating steamed crabs brings out the best of this beer. But only if it is ice cold. Did I say that? Here's to my grandparents card games with me on Nana's lap . . . crab feasts and kegs . . . Brooks Robinson, a steamed dog, Memorial Stadium's "Give that fan a contract" (I have one) and Mr. Boh! BTW . . . My rating is biased.

As a college student, it's been a popular pick-up for parties and for Marylanders for years. Something good for the regular folk. If you're looking for a bud light or Coors alternative, then Boh is the way to Goh!

I can only drink this when I'm really drunk, and that's when I realize I can't drink anymore because there's a foul taste in my mouth.

This showed up at the Food Lion for about six months several years back. I had always wanted to try this regional favorite, and it was pretty much as expected: Not fabulous, but a good AAL that would probably go down nicely at cookouts, etc.

You can really only get it in Maryland, so a lot of folks wax poetic about how this beer tastes like home or about its prominence relative to Baltimore and especially the O's. It tastes like field parties from when I was "21," so the nostalgia is certainly there.

That being said, at $15 for a cube, it does exactly what it's supposed to. Easy to drink when cold; reminiscent of a sweeter, bubblier PBR. Goes well with crabs, cookouts, and/or Baltimore sports.

For all of the AAL`S Iv`e tried, I like this one the best! I`m not going to get technical in describing characteristics and so forth, no need to. I love how satisfying, and crisp and quenching this beer is! Nuff said!!!

Review #300. This Natty Boh beer is special to me as I usually have it before the Orioles baseball game where they sell tall cans cheap - ~$2 to $3. Good times. National Bohemian has a thick, white head and a very clear golden appearance. Carbonation is high. Aroma is faint, but what one would expect from an American-style adjunct lager- that beer smell. Taste is delightful, with a nice hop balance; hop character is a bit more pronounced than others in this style category. Mouth-feel is light and watery. Natty Boh finishes crisp and refreshing. Overall, this is a very enjoyable beer and I usually reserve it for pre-baseball tailgating in Baltimore. Natty-Boh, baby!

Appearance (3.5) : pours a pale straw color with a decent amount of head.

Taste : (3.75) Super refreshing. The malted grain notes come out immediately and ends with a slightly hopped bite. The nail polish remover (alcohol) is in the taste somewhat, but much much less than the nose. After awhile I realize this tastes so much like Pabst but with less dirt/earth and more nail polish.

Overall (3.54) : The label says it was made in WI. I think it's still Pabst made though? Anyways, this lager tastes paerrrrty good! It's a good pair for food and a night on the couch watching The Office. Love the one eyed guy on the label, and I wish they made it up here. Nice stuff! Back to the couch...

Poured 40 degree Fahrenheit into a Stella stemglass. No born date.

Pours a lucid straw color with a fizzy bright white head that falls out quickly. No lacing to speak of.

Smells of some corn and very faint hops.

Taste is really close to non-existent. Corn and a tough of hops.

Mouthfeel is a smooth, even, if highly effervescent spreading over the palate. Actually enjoyable.

A: crystal clear; light gold in color; 1 finger moussy white head that receded to a thin collar; no lacing; a lot of bubbles rising;

O: tastes better than it smells; in the world of adjunct lagers, this is a pretty good one;

Poor scores across the board, except for the "overall" category which I gave a 5. My reasoning has nothing to do with beer. The Ravens have won every playoff game (including the Super Bowl) in which I drank Natty Boh; therefore, overall, the beer is outstanding.

Had it on tap for my first time last night at Nacho Mama's in Canton, Baltimore. Its back in kegs after 15 years! I don't consider it a great beer or anything, but if you live here in Bmore chances are you like and or have some sort of affection for it. I hated it when I was young and I would always spend the money to try new craft brews, but after years of overlooking it I came back and now its an easy go-to beer.

A. Thinly yellow looking with a surprisingly creamy head that held up for quite some time.

S. To me it had this intriguing really faint almost vanilla note that I found interesting and had never noticed pouring it from a bottle.

T. Same old beer of the working man taste...faint grain, corn, and basically one-note at best. You can just tell that no money was really spent making it.

D. Easy to drink and perfect for crab feasts or long days at the beach where a bigger beer (basically any other) may do you in.

I like this beer. I like Baltimore. I like Camden Yards. I like to drink this beer when in Baltimore and maybe even at Camden Yards watching the Red Sox whoopin' some robin birds. Good beer, great logo. Ice cold, gimme gimme, yum yum. If not in Baltimore and I can find it wherever I live, I like to drink 'em and watch The Wire and perhaps listen to J. Roddy Walston & The Business.

20th Anniversary Camden Yards can. Badass. 16oz. Poured into a Natty Boh pint. This will probably be a short review since there's not too much to this beer.

Appearance: Clear straw yellow. Fizzy white one finger head. that fades quickly to a ring along the top of the glass.