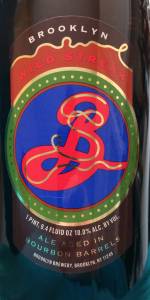 Notes: There was a time when all beers were aged in wood, and yeasts ran wild and cavorted together. Modern brewing is wonderful, of course, but sometimes a little cavorting is a fine thing. Sometimes it gives you a chance to reveal your funky side. We have to admit it - we’ve been cavorting for years...and sorta holding out on you. We didn’t want to do that, but the fact is that up until now we only had enough room to make this beer for ourselves and some close friends - we didn’t have enough beer to put it out on shelves. We actually make a lot of beers like this - we call them the “Ghost Bottles”, and we’ve enjoyed pouring them for you at tastings and dinners.

Now we’re very pleased to finally give one of our “ghosts” the opportunity to materialize in your hands. Brooklyn Wild Streak starts off as a Belgian-inspired golden ale. After fermentation and a brief conditioning, we then age the beer for several months in second-use bourbon barrels, giving it a soft, round character infused with nicely balanced oak flavors. Finally we bottle the beer flat and re-ferment it with blend of priming sugar, Champagne yeast and the wild yeast strain Brettanomyces. As the two yeasts do their cavorting, the beer gains its natural carbonation. The “Brett” takes many months to do its thing during bottle aging, but once it does, Wild Streak is enlivened by a wonderfully complex earthy funk.

Poured from a cork'n'cage bomber into a Dogfish Head tulip. Blend #2

T/F: Sweet up front... strong bourbon and grain flavor. Vanilla and oak... no real sour flavor or even tartness. Medium bodied and boozy... smooth... sticky on the tongue. More bourbon in the aftertaste.

O: Not picking up much in the way of 'wild ale' in this beer. Just a bit in the aroma. Tastes like an average bourbon barrel aged Belgian Golden. Not bad... but also not what was advertised or expected. Kind of forgettable.

Bottle thanks to Luc. Alcohol is very well hidden but the beer is too tame, needs more flavor.

Blend #1. Bought two, and this is the first. Looks good, a little chill haze, small bubbles rising, and an inch-plus of foam off a vigorous pour. Smell is still bourbon barrel plus a little Brett funk. Flavor follows the smell -- barrel and Brett -- but they blend so well at this stage. The 10% comes through a little more as it warms. Mouthfeel is completely complementary to the foregoing -- smooth, a little creamy, but I do feel those small bubbles. Overall, impressive. I don't care what it's categorized as, I like it. Very subtle for a big beer. I won't wait long to drink the second bottle.

Blend #3
Corked and caged 750ml bottle poured into a snifter. The taste is pale malts with moderate sweetness and a dry finish with some warmth from the high ABV. The barrel comes in a little more as the beer warms, but it is never a predominant part of the beer.

"There was a time when all beers were aged in wood, and yeasts ran wild and cavorted together. Modern brewing is wonderful, but sometimes a little cavorting is a fine thing. Brooklyn Wild Streak is our barrel-aged Belgian-inspired golden ale enlivened by the earthy funk of the wild yeast called Brettanomyces. It's particularly great with cheeses and game meats. Oh, go ahead. You know you want to." Brewed in the style of a Belgian Strong Pale Ale aged in Bourbon Barrels. Available in 750ml. bottles as a limited release.

(Appearance) Pours a fizzy, crisp cream white head over a moderately hazy golden amber body with light carbonation. Retention is below average and there is no visible lacing. 3

(Smell) The aroma is indicative of a Belgian Strong Pale, with pale, biscuit and bread malts constructing a rich, but clean malt aroma with residual sweetness, soft honey, caramel syrups. Very subtle Brettanomyces character in the aroma with a light tartness, still the Belgian Pale character comes through largely untouched. I also have a difficult time detecting any barrel aged notes in here. Potency is moderate. 3.5

(Taste) The flavors largely taste of a Belgian Strong Pale, with bread malts, smooth exposed graininess, subtle caramelized sweetness, largely fermented out with the expected bite of alcohol. Again there was no discernible bourbon character nor Brettanomyces character present in the flavor. Altogether, it was pretty average flavor overall with little to no novelty going for it, especially in the avenues that would have drawn me to drop 20 dollars for a bottle of this. 3.25

(Mouthfeel) Texture is slick, silky, lightly residual, medium dry. Carbonation is moderate, generating a medium frothiness and a moderately crisp finish. Body is medium for the style, medium+ overall. Balance is slightly grainy and tangy over sweet. Alcohol presence is moderate, and there are no off characters to note. 3.5

(Overall) The expectations were high going into this ale, but the end result was fairly ordinary with no discernible Brettanomyces impact nor bourbon and barrel character. The exposed graininess doesn't make it the most pleasing beer that I've had from the brewery, either. It's very pedestrian and alarmingly simple for something that was given the big-bottle treatment. While not all experiments can be winners, this proved to be yet another disappointing and astoundingly expensive release from Brooklyn. I can only be a sucker for so many more of these. 3.25

750ml bottle poured into a tulip
A: Light orange with a solid two-finger head
S: Belgian yeast, brett, malt and spice
T: Matches the nose though mostly malt/yeast
M: Surprisingly light given the abv; smooth
O: I like that the focus is the various microbes not the malts/hops. I didn't taste any barrel influce except perhaps the smoothness. I let this one age for a bit; not sure if that helped or hurt though it certainly doesn't taste old

The beer hits with a big bready sweetness with the Belgian Golden Strong Ale coming through, onto stone fruit, an intense carbonation. The beer hides it's alcohol quite well with its sweetness, the bourbon barrel character peeking through, a hint of funk with a dry barrel forward finish.

F: Starts light on the tongue but moves into heavier booze, syrupy, and warm on the throat territory.

O: I like it, but wish a bit more of the Belgian pale and brett flavors remained in tact. It's a huge wallop of bourbon that it's slightly too strong.

Overall- if you like whisky, this is a beer for you. It opens up over time, has fascinating notes. Fairly unique

I got a bottle two weeks ago from the brewery. It poured into a snifter glass a pale straw color with a finger of head, despite a very aggressive pour. The smell was sharp whiskey. Too sharp. In fact, that's almost all I could smell. There's some vanilla scents, i'm not picking up too much else. The taste is overpowered by the bourbon barrel aging. It's not a very balanced beer. I have to reach to taste the wild in it. It's there, but weak. The mouth feel isn't great. A bit to thin for the style. Not much carbonation up front. My thought is that maybe they made a good wild ale, which they ruined in bourbon barrels. So many good things going on here, but they're not working well together. Blue Mountain's Sour Banshee (while a much darker-style bourbon aged wild) was way better and a much better price. I'm left wondering how good bourbon barrel-aged Brookyln Blast could be.