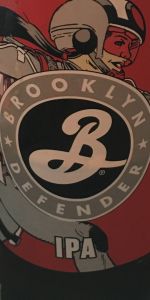 Brooklyn Defender IPA is proud to be the official beer of New York Comic Con.

Got in a police chase, totaled my car, almost died, but it's a pretty good beer. Unforgettable.

On tap at Cardinal Pub & Bar, Stavanger. Clear golden colour, moderate white head. The aroma has hints of dust, malts, herbs, caramel and a little fruit. Lagerish mouthfeel and flavour. The flavour has the same elements as the aroma, it is quite dry, and has moderate bittering hops.

Pours golden yellow with a 1 1/2 inch white head, which lasts. Moderate lacing to the end.

Less citrus flavor than I was expecting but good.

Man it’s been ages since I last had an IPA so I was really looking forward to this one - and it turns out to be oh-so-not-so-good...
Okay, I must admit that once the beer warmed up enough, I started getting the aroma and the flavor, but until then there were times I thought it was dead. The aroma is kind of nice though, piney I think what would describe it the best but the flavor could not go that far, even at best it felt a bit diluted. I think it was my bad because I expected something more decent from Brooklyn Beers, although I don’t remember their trademark IPAs either (although the Sorachi was nice.)
Anyway, the beer was not that much of a letdown, it was rather a dry, reserved IPA, East Coast style, I think I should have been more grateful for having one again. Still, I got no superheroes there, guess it’s more like a “Bruce Banner” but not a “Hulk” kinda thing...

On tap - a lighter American IPA in both alcohol content and taste, strong citrusy smell with a hoppy flavour and bitter finish. Quite sessionable and easy to drink.

Overall impression: This is an excellent, well-balanced, highly drinkable, Anglo/American IPA, with subtle nuances that are likely to be under appreciated in this late hop heavy, lactose-laden era of excessively milky and tropical-aroma NEIPAs. (I love a good NEIPA like Julius, Alien Church, and even Tired Hands’ original Milkshake IPA, but I am sick of the overly lactosed beers in vogue now.)

In terms of malt profile, ABV, and overall bitterness, it resembles an English IPA. It is straw-colored and crystal clear, with medium body for an IPA. It is breadier and fuller than a simple domestic US 2-row, and it doesn’t give the impression of any crystal malt character. Perhaps they used a Pale Ale base malt (instead of Pale) or used some specialty malts to add a breadier character to a base of Pale malt. The bitterness is more restrained than typical American IPAs and well in balance with the malt and 5.5% ABV.

In terms of hop character, it is much more a classic American IPA, dominated by Cascade and Simcoe but with tropical and fruity notes that blend well.

Compared to a watery, heavily late-hopped “Session IPA” this “Golden IPA” is much more balanced between the malt, hops, bitterness, and alcohol. Flavorful and satisfying at 5.5%, it is neither an American Pale Ale, Session IPA, NEIPA, or classic American IPA, which are typically 6-7% ABV.

Mouth around medium. There is a bit of a sour malty aftertaste.

Overall, lightweight ipa, likely was much better a month or two ago.

Look: It pours golden and clear with a white head. Head retention is good.

Smell: It has a strong tropical fruit aroma that features guava and papaya. There is sweetness to it overall with a low amount of perfume notes.

Taste: It has tropical flavor in the forefront with guava and papaya. It is sweet with fruity esters as well.

Feel: It has a medium body with moderate bitterness.

Overall, it certainly has a tropical burst of flavors to is, but it is a bit sweet as well.

Golden IPA, seems to be brewed in Sweden...not sure I have had a Swedish beer before...it sounds like they are trying to make it sound American...

Tastes like sherbert a bit. Kind of funky and unique. Quite a lot of interesting flavours happening on the tongue after swallowing. I don't love it, but I definitely like it! Great can too, kind of looks like Sunkist or Fanta.

Served on tap in a pint glass
Appearance – The beer is served a clear golden amber color with a one finger head of white foam. The head has a decent level of retention, fading over time to leave a little bit of foamy lace on the sides of the glass.
Smell – The aroma of the brew is heavy of a caramel sweet doughy smell that is mixed with some aromas of tropical fruits. Along with these aromas comes some grapefruit hop smells as well as a touch of pine.
Taste – The taste begins with as may have been anticipated form the nose, with a decently caramel flavor mixed with some tropical fruits and a decent bit of breadiness. Upfront there is a hit of grapefruit hops, with very little other hop presence. While the grapefruit lessen a tad in intensity as the taste moves forward it is replaced by some pine and herb to leave one with a modestly hopped and somewhat sweeter malted taste to linger on the tongue.
Mouthfeel – The body of the brew is average in thickness and creaminess with a carbonation level that is average as well. For the mix of flavors the feel is good and makes for a nice easy sipper.
Overall – A decent and fairly easy drinking brew overall.

Sweet golden color with no head at all but just a swirling who is dancing.

Smell is caramel at first and toffee followed by hops.

In mouth it is sweet maltiness with a hoppy ensemble

O: I bought this in NJ, why was it brewed in CA? - are they (still) in transition (or limbo) moving out of Utica?... this ain't a bad beer, but I would much rather try a less-filtered version (1532)

On tap on the boardwalk at the Jersey Shore.

Modest hop and caramelized malt aromas. Some citrus and pine.

English malt and hops. Citrus and earthy in moderation.

It measures up to the old timey IPA style. I liked it.