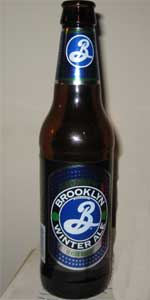 Notes: Brooklyn completely changed the recipe in 2006. Its now a Scottish-style ale. Brewmaster Garrett Oliver explained to us that: There are no spices at all. Good British floor malts and hops along with our yeast strain account for all the flavors. It has a Scottish-style cooler fermentation, which pushes malt to the forefront rather than fruitiness. It was brewed with Scottish Floor-malted Maris Otter, English crystal malts, Belgian Aromatic malt, American roasted malts, American oats and hopped with Willamette.
View: Beers | Place Reviews
Reviews: 482 | Ratings: 1,133 | Log in to view all ratings and sort
Reviews by poorbanker:

Pours a murky brown with a stable if unspectacular head.

Slightly sweet and then a bit tart. Indistinguishable flavors that border on bready, malty and fruity but never really settle on one. A lemon peel bitterness on the finish.

Way to thin whether it's aiming to be a Scottish Ale or a Winter Warmer. Nothing to write home about here and while it's not bad, when a brewery releases a beer near the end of the year I usually look for a lot more than this.

Thanks to AKSmokedPorter for the taste.

A: Deep amber, but bright, with a darker-than-white head.

S: Caramel malts, with a little spice to it, and something fruity.

T: More than I expected, nice bready malt taste to it; sweet caramel, grainy, maybe even a touch of apple and cinnamon.

M: Lighter than preferred, but a nice softness to it.

D: Good stuff, easy to put down, and nice ABV.

12oz bottle purchased from Clarendon Wines in Boston. Pours a medium-dark copper with a bit of head. Decent malty aroma. Initial taste is of malts, but then leads to a slightly tangy bitterness to round things out. I was worried that this was going to be another all-malt-and-only-malt "winter beer" experience, and was happy that this offered a bit more.

The aroma wasn't overwhelming at all. Another reviewer said it reminded him of Yuengling, and I sadly have to agree. Smells of faint roasted malt...and even corn, though I know that isn't in this beer.

The taste was completely different, however. There's some lightly roasted malts certainly present on the body....but there's a definite note of smokiness to it as well. At first I wanted to say it was as if somebody put a shot of Scotch in it...it's pretty different. The finish is pretty clean, though, with just a tad of hop bitterness reporting. A small amount of residual smokiness hangs around after the swallow along with a faint grain note.

It's an interesting choice for a winter beer. While others seem to rely on thicker, sweeter beers for winter seasonals, this is not like that at all. I'm not a huge fan of smoky beers and didn't think that this beer was otherwise all that noteworthy...but it's far from bad.

The smell is very aromatic. It has plenty of burnt sugar, roasted marshmallow, and roasted malt. Also has a defined Scotch whiskey smell.

The taste has an up-front mix of roasted malts and oat. There is also roasted marshmallow and a lightly sour Scotch taste.

The mothfeel is rather creamy, and smooth.

Overall, it is a great example of a mild Scotch ale.

Great reddish amber hue to the beer with a nice off-white head that is disappearing quickly. The beer is very bright and has no sediment whatsoever.

Very thick rich taste to the beer. It tastes like toasted marshmallows, figs, roasted nuts, and brown sugar. Not a bitter beer at all.

Nice smooth beer, very concealing of it's 6% ABV. I think it's also extremely drinkable. This might be my go-to beer for the holiday season.

Pours a clear amber brown color with an average tan head that settles into sparse cap. The aroma is of lemon, tea, and perhaps a touch of brown sugar. The taste is of a metallic lemony malt, quite astringent, some caramel/buttery notes and a slight earthness in the end. The Winter Ale has a nice chewy malty body which is quickly cut by a lemony astringent characteristic. The tartness of this brew kills it for me. I feel it takes away from what should be a nice malty brew. This one just doesn't do it for me.

I'm usually a big Brooklyn fan and maybe me expectations were high but I was disappointed in this one. I thought one of their weaker efforts. It started out well pouring with a clear rich amber color and a nice thick head. It also laced great, marking every sip. But as good as it looked I thought the taste lacked any character. Slightly bitter finish. Don't get me wrong it is a well made ale and most seem to like it, just did not excite me.

A - a beautiful deep red body with a off white head. The bubbles were very tight and foamy. When the head subsided it left a creamy lace stuck to the walls of the pint glass.

T - tastes almost identical to its smell with a slight bitterness in the aftertaste. Medium to full mouth feel. The malt is star of this beer.

D - Very high...for me anyway...but I have been known to drink pitchers of barleywine. I really liked this one.

I tasted it before I read the summary of it that stated there was no spice added. I swore there was cinnamon or something added to this.

A - Pours a fairly clear copper-red color with a finger of frothy off-white head. The head fades slowly down to a thin layer leaving behind some lacing.

S - Aroma is full of sweet toasted caramel malts and some bready scents. There is also a bit of copper, some spices, and just a touch of light fruits.

T - Starts off with a mix of some bready flavor and some toasted caramel malt. There is also a bit of yeast and spice in the background. Through the middle, the spices and yeast get a bit stronger and some fruit flavors comes through. The finish is a mix of sweet caramel and a bit of fruit that lingers nicely.

M - Medium bodied with moderate carbonation. Feels smooth and crisp. The finish has a nice level of sweet flavors that lingers.

D - Very drinkable. The beer feels really smooth and well balanced. Could use a bit more kick, but there is enough flavor to keep it interesting and it does not feel too watery.

Notes from both bottle and draft; score based on draft version.

Flavor is entirely malt forward but with more than enough bittering hops to ensure a bitter finish. Heaps of toffee malt with a distinctive British flavor that I've not yet found the words to describe. A malt bomb with winter warmer qualities that remains sessionable.

On tap is superior to bottled (which is contract brewed), though the difference isn't as great as with other Brooklyns such as the lager. More fresh, floral hoppiness in both aroma and flavor. Mouthfeel for both versions could be just a bit heftier. Bottled version carbonation has tended to fade too quickly.

Between their Winter Ale and Black Chocolate Stout, Brooklyn's winter seasonals are a strong showing. Definitely worth a try, especially on tap paired with food.