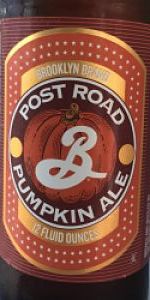 Rated by NastyNorseman from New York

Reviewed by Rapscullion from Massachusetts

1.89/5  rDev -45.4%
look: 3.5 | smell: 2.5 | taste: 1.5 | feel: 1.75 | overall: 1.5
Possibly the most disappointing pumpkin beer I have ever had. Pleasant coppery color with virtually no head.
Nose is light with some odd notes. Flavor is slightly malty with some fall spice notes but the pumpkin is lacking.
Finish is bitter with a chemical after taste.

Reviewed by ThrewRedButter from Massachusetts

Aroma – Subtle pumpkin with a strong malt and cracker character.

Taste – Pumpkin is bigger here than it was on the nose, but even then, it still isn’t very robust. More concerning if the aftertaste which is dirty and unpleasant. It has a mossy/grassy taste, but not in a fresh hop sense, but again, just dirty.

Mouthfeel – Body is light and crisp. Arguably thin at times, but it moves the beer along.

Overall – Pretty bland overall and the taste was just off. Any pumpkin that was there was too hidden behind a thin body and bad aftertaste.

Rated by SmoothOverEverything from Ohio

Aroma: Understated aroma of cooked pumpkin and slight malt, being reminiscent of graham cracker pie crust. the traditional pumpkin pie spices are employed rather sparingly, with a bit of cinnamon and vanilla. A moderate herbal hop presence is notable

Taste: The taste begins with mild pumpkin pie spices, mainly cinnamon and nutmeg, more than in the aroma, but understated compared to many examples of the style. Again, as in the aroma, there are malt notes that harken to graham cracker pie crust. One reviewer stated the taste is very much like unsweetened pumpkin pie, an astute observation. Towards the finish there are earthy and herbal hops to bring the taste to a gracious close.

Mouth feel: A bit thin, but, still pleasant, with a bit of sharp carbonation.

Drinkability/notes: A very well-crafted and subtle pumpkin ale. The more typical examples of the style will feature abundant to extreme amounts of pumpkin pie spices, whereas Post Road Pumpkin Ale employs them sparingly. This is a worthy choice for those who find many pumpkin ales to be excessively spiced. I do not find myself in that camp, but enjoyed this, nonetheless. This would make a worthy addition to the Thanksgiving table.

Presentation: Packaged in a standard twelve-ounce brown glass longneck bottle with a pry-off crown, served in a Duvel chalice.

Rated by berniekbrown from New York

Reviewed by jadpsu from Georgia

3.73/5  rDev +7.8%
look: 3.75 | smell: 3.75 | taste: 3.75 | feel: 3.5 | overall: 3.75
Legacy single beer shelf purchase.
LOOK: Pours a less than clear dull amber. Color of pumpkin pie. Tan head that quickly settles to a thin skim. Retains slight amount of side glass lace.
AROMA: I get scents of pumpkin, nutmeg and cinnamon.
TASTE: Mild flavors of the aromas, with some added caramel. Malts are most prominent.
Thought it would be more a warming beer than the thin mouthfeel and mild harvest season flavors it had.

S: Smells like a regular beer with hints of pumpkin.

T: Actually very mellow on the spice. Inoffensive and well within it's boundaries.

O: Done very well. A pumpkin ale doesn't need to be strong or sweet. This is good how it is. It would be nice to have a few of these in the fridge for Thanksgiving.

Great looking beer - clear orange colored liquid with a light head to top it off. The smell is sweet and lightly hoppy with a similar slant on the taste to closely match. Mouthfeel is carbonated, more so than I like. I will add that the taste was more weird than complex which pretty much turned me on this - though I still think its a solid enough brew.

3.87/5  rDev +11.8%
look: 3.75 | smell: 4.25 | taste: 3.75 | feel: 3.75 | overall: 3.75
Look - poured into a 10 oz glass. Amber in color, transparent, with plenty of carbonation. Small head with some lacing.
Smell - a blend of fall spices, including nutmeg, cinnamon, cloves. malts and of course pumpkin detectable. kind of smells like a liquid pumpkin pie: very inviting.
Taste - surprisingly refreshing. a nice sweetness complements the malty backbone, but otherwise a really crisp brew from start to finish.
Feel - medium bodied, high carbonation, and lower ABV at just 5%.
Overall - there are a ton of pumpkin beers out there, but this one is one of my favorites for its adherence to the traditional style and its drinkability. Really showcases the pumpkin in the beer, and this is my go to in the fall.

3.62/5  rDev +4.6%
look: 4 | smell: 3.75 | taste: 3.5 | feel: 3.75 | overall: 3.5
Medium body and carbonation, nothing to complain about as for as the feel of this beer.
Aroma is pumpkin pie spice, some malt and roasted malt in the background
Taste isnt to far off from aroma with it not being sweet at all , almost dry. When I think of pie I expect it to be a little sweet and that made the spice come off dry
It is actually a very well made beer and for a pumpkin beer it basically hits the mark

Rated by Mugman8 from New York

Reviewed by Amendm from Rhode Island

Toasted malt and pumpkin/squash battle for the lead of the taste with caramel malt far behind, hop bitterness is replaced with spice. Semi-sweet and mildly bitter at first, drys to neutral as bitterness rises to average at the short clean finish. Spice and a touch of salt linger briefly.

Medium body, above average carbonation. Alcohol is well hidden, light on smell and taste yet well balanced. Lager-like looks and well attenuated. Malt and pumpkin add to the richness.