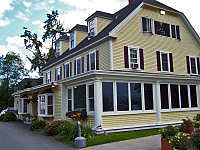 If you are in North Conway, NH go to the Moat Mountain Smokehouse and Brewery. This is where the locals and in the know visitors go. The food and beer are reasonably priced.They brew so many different styles enjoy an 8 glass taster. We have going there for many years.

One of my favorite places to go in North Conway. Great beer and great food. These guys are also dog lovers- as the sign says, don't leave your dog in the car, they will call the police. I have seen it happen!

Interesting little restaurant/brewery with a solid beer selection and good food. Flight was nice as it included 8 different beers. Wait staff was good and food was above average.

Went to eat and drink here during a trip up in the area. The place was very packed even with what seemed to be ample parking. Surprisingly though, the 45 minute wait we were told we would have was cut to 15 minutes. The restaurant was quite large with a New England inn atmosphere. Seating was in several locations across the first floor of the building with a large bar area near the front.

The food menu came on one sheet of paper, but it seemed loaded with smokehouse and barbecue options. Our waitress was very nice, quick, and attentive. I decided on the 8 beer sample which was massive. For dinner, I had the brisket served on cinnamon raisin toast. It was quite good and the portions were generous. I was not sure if other beers are served at this establishment, but there were 8 staple beers (that were part of my sampler) with what looked like 4-6 rotating beers. The beers I had ranged from a stout to a fruit beer and offered some good options.

Overall, I liked this place, despite it being a little crowded during a heavy tourist weekend. This place can serve as a nice local hangout or a tourist destination.

The taplist had lots of options, but there wasn't anything from my sampler that really impressed me. Nothing bad, just nothing great either. The restaurant service was good and the food is good too, but I think I'd try someplace different the next time we're in town.

Steve and Vickie know how to do this and do it well... Beers are solid and pretty much to style... Always busy, so be patient... Food couldn't be better.... Always enjoy my visit...