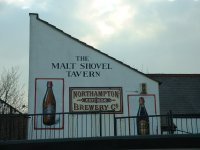 View: Place Reviews
Reviews: 2 | Log in to view all ratings and sort
Reviews by Grahampuba:

From a yanks perspective. Great legit spot, nice change from the franchise pubs. Likely best beer selection in Northampton. Food was great too. Ploughmans lunch could feed a few.

Simply a Gem! Our Coach took the 10 minute detour from the M1 Motorway as we headed North on the way home from our Annual Easter Belgium Trip. We had phoned ahead so they were aware that 32 drunks were about to invade their Pub, but nevertheless, the Service and Fare was absolutely top notch.

Oh where to begin?! Well I counted 10 Handpumps. 1 for the Real Cider and 9 others selling Guest Beers, and an excellent range at that. I have been working in the States for 20 months now, and had not even heard of half of the Beers on offer. Always tries to have a dark mild on sale, had Batemans Mild on when we were there. The quality of the beer on offer was superb, no complaints from any of our party of 32  not bad.

It also sells a small range of bottled Belgium Beers, including Cantillon Gueuze I noted  good stuff. Has a couple of Belgium Beers on draft as well as some unusual lagers.

The bottle range behind the bar is equally impressive. A good range of Belgium Fruit Genevers, English Country Wines and a massive selection of Single Malts from Scotia complete an impressive line up.

In addition to the liquid offerings, the Pub also offers wholesome and great value Home-Made Food. For our Party of 32, they put on some genuine Cornish Pasties and Chips, just what the doctor ordered.

The interior of the Pub is positively festooned with Breweriana, Mirrors, Posters, Signs, Beer Mats, Old Bottle Labels, etc., etc. Many are from the ex- Phipps and NBC Breweries. Both were in fact opposite the Pub and only demolished in 1974 to make way for a replacement Brewery*. Old Bottle Labels from Phipps have been recreated and painted large on the exterior walls of the Pub, quite impressive looking.

It is also one of Northamptons premier venues for live Blues as well.

*Like that annoying spot that appears on the end of your nose, the irony about this excellent Real Ale Pub, is that it is directly opposite Carlsberg-Tetleys monstrous Mega-Keggery. The Malt Shovel may be small in size but somehow it must be awful for the workers who brew and package fizzy, yellow, bland pasteurized filtered crap to constantly see this Real Ale Haven over the road.