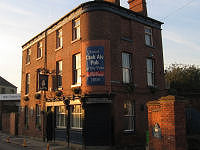 View: Place Reviews
Reviews: 3 | Log in to view all ratings and sort

The pub that started the Real ale boom in Sheffield and still one of the best pubs in the area. The area around it is a lot more salubrious than it used to be and becoming increasingly yuppified as student accommodation seems to be taking over the area.

The Kelham Island Brewery is situated next to the pub. The Fat Cat as the atmosphere of a true local and the bar area can get very busy at times though on this visit (a lunchtime) it was fairly quiet, extra seating is available upstairs. The beer is still good value despite VAT increases and on this visit i had a Kelham Island Pale Rider which was excellent. The food is cheap but on this occasion my Steak Pie wasn't particularly hot.

The Fat Cat is still one of Sheffields must visit pubs and The Kelham Island Tavern is just around the corner.

I stopped in at the Fat Cat just after I left the Kelham Island Tavern. I'm glad that I made the stop.

The atmosphere is nice and pubbish. Sort of dark. There are two separate rooms to drink and eat in. The bar is more easily accessible from the one. The staff is very friendly.

We ordered some steak pies while there. They give you a number at the bar (like at a deli), they only took 20 minutes. I would have liked to give a higher rating for the service, but they lady who brought out the pies just sort of dropped them on the table and walked away.

Prices were reasonable, and I had a good time there.

Billed as Sheffields first Real Ale Free House since 1981. I first visited this Real Ale oasis in 1987, when the offerings from the local Wards Brewery were dominant elsewhere in the City & Guest Beers were still a rarity in British Pubs. Wards are long gone, but thankfully the Fat Cat remains. Now it has other facsimiles purveying Guest Beers with the likes of the nearby Cask & Cutler and Hillsborough Hotel. But these establishments compliment, rather than compete with, the Fat Cat  indeed many beer visitors will do all 3 Pubs in one days visit.

The Fat Cat once physically housed the Kelham Island Brewery in its backyard. Due to its success the Brewery is now next door to the Pub in a purpose built, much larger building. The old Brewery is now the Visitors Centre. The Pub has 10 Handpumps that usually include 4 ever changing offerings from Kelham Island & Timothy Taylors Landlord. The other 5 Pumps are dedicated to a fluid range of Guest Beers. To date, the Fat Cat has served over 4,500 different Cask Guest Beers, no mean feat!. It also sells the real Budvar & Guinness, as well as always having a draft Cider/Scrumpy (usually Westons). When I was last there it also had a second traditional Cider (a spiced one, I sadly forget its name) from a Barrel on the Bar. Stocks a decent Bottled range of Belgium & other Foreign beers, over 20 Fruit Wines, and a small selection of Single Malts. The discerning drinker is well catered for at the Fat Cat.

Homemade Food is also offered, and is so popular that it can be very difficult to get a seat at lunchtimes between 12 - 2:30pm. Great tucker that represents excellent value for money; there is always at least one option for Vegetarians & Vegans.

The Pub itself has plenty of character. Built in the 1850s it is located in Victorian backstreets, once right in the middle of a thriving industrial area, now sadly somewhat of a quiet backwater. A smart corner 3 floor frontage attracts you inside. To the left is a No-Smoking Room (one of the first in UK Pubs), to the right through a small door is the L-Shaped Bar area, both well decorated with Brewery Memorabilia. Outside there is a small Beer Garden and another room upstairs.

In its first year, the Fat Cat was awarded the first Pub of the Season from Sheffield CAMRA. It has just gained the award again for 2003. Its truly well deserved.

A true Real Ale bastion that is well worth a visit for a few hours!

Fat Cat in Sheffield, GB2, United Kingdom
Place rating: 4.06 out of 5 with 3 ratings