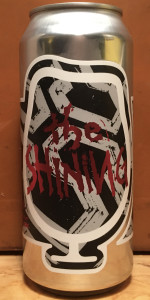 ONE PINT can
Served in a stemless wine glass

This beer pours a bright, turbid, yellow hue. It is topped with a mountain of off white head that leaves decent lacing.

CItrus and tropical fruit on the nose. It has a sweet aroma.

4/1 canning:
Pale white-yellow hazy beer with a deeent head and some lacing. Nose took time to develop, but malt and slightly dank notes bounce back and forth. There’s a light hint of citrus, which takes a few sips to bring out a little more.

Taste itself started a little neutral with a light but long pine-leaning ending. The flavors opened fairly well with warmth relative to the nose. Citrus with a mix of orange and tangerine came to me floating along a smooth, near silky yet thicker mouthfeel. As the flavors came out up front, the pine started to fade from the back. This led to a more consistent profile throughout, though I’d have rather had the dichotomy.

$18 4-pack at Healthy Living. Pours hazy lemonade-yellow with a foamy white head that leaves nice rings of lace. Tropical fruit dominate the nose and combine with a healthy dose of grapefruit in the taste. Medium- bodied with low carbonation. Overall, a very nice DIPA from Foam.

16 oz. can.
Canned 04/30/20.
Moderate to vigorous pour yields a 3/4 inch white head over a cloudy, light golden body with some sticky lacing. Nose of earthy pine and citrus, with solid amount of dankness. Taste follows closely with bitter citrus pith and a slight earthy and piney dankness. Nice feel and overall, another one right up the hazybois' alley.
Cheers!!

Had on tap. Bright hazy yellow with a white cap. Smell hits hard with sweet pineapple, mango, lemon, melon and decent dank hops. Taste is more uniform behind the malty and sweet pineapple, lemon, and mango, with some lingering hops. I know the feel is supposed to be smoothie-like, and though it is creamy I wanted more viscosity to fit the vision. Plenty bright, medium bodied.

Picked up some fresh cans at Foam, and just now popped one at 2 weeks out. Poured a very light gold yellow haze with a full small beaded head; not much retention but decent lacing. Nose was a bit dank with citrus. Taste mirrored; maybe a bit more bitter. Feel was smooth and a bit crisp. Despite bigger abv it came across as lighter style NEIPA. Decent beer; but not up to some of the other Foam beers I had at their brew pub. Will save other 3 cans for outside/hotter weather. Expect it will be refreshing.

Pours a hazy, verging on opaque, light gold topped with 2 fingers of rocky white head; retention is fairly short, and leaves minimal lacing, all of which fades quickly.

Aroma bursts from the can with an overarching hoppy grit that soon fades to smoother citrus; peach skins, mango kefir, guava, and dank orange cream are at the forefront; hoppy spice, and an interesting, faint herbal/earthy potpourri on the finish.

Mouthfeel is light-bodied and really pretty juicy; very light carbonation and decent hoppy grit, but very consistent and straightforward on the palate; not a ton of impact to this one, but its refreshing quality is undeniable.

An easygoing DIPA that's almost too casual for its own good; the profile has plenty going on, but it doesn't come together fully, instead embracing an easy drinkability and smooth, if not entirely bitter or juicy, character. This is a solid and really approachable NEDIPA, but I'm finding it bows out before reaching the next level.

Hazy golden pour, citrus and tropical flavor. A very satisfying double IPA with a nice Imperial wallop. Not terribly complex, but the beer has citrusy refreshment down pat.

This is straight Zebra Stripe Gum. From the smell to the taste a rush of childhood memories are coming at me. Perhaps just a tick on the thin side; however, so glad I was able to pick up a 4 pack. Look forward to my next visit to Burlington.

Foam Brewers The Shining NEDIPA 8%. Poured into a 16 IPA glass canned recent. Pours a beautiful hazy yellow orange with a half finger sticky white head that leaves some thin wisps of lace behind. 4.25

Taste tropical front to back, guava, pineapple, tangerine, and a nice balanced shot of grapefruit. 4.5

Mouthfeel is a big medium, soft gentle carbonation, not dry but sticky, and at 8% goes down so easy. 4.5

Overall his another awesome beer from Foam and I always expect a lot because they are masters of NEIPA and this another great. 4.5

T/F: Sweet and juicy to start with bitter grapefruit and tropical fruits to follow. Melon and mango... bitterness is modest but there's also some tangyness to it that is very pleasant. Sticky on the tongue... complex and delicious. Medium bodied.

O: An outstanding Foam IPA. Great flavor and one to seek out. This one has got to be amazing on draft.

Foam is turning into one of my (got to go) breweries if I am in the area. I am not sure if theirbeersareavailable outside of the immediate area but if they are BUY SOME! This The Shining was brought to me by a friend and he just imbedded my friendship with him even more. Delightful dbl IPA.

Poured from the can into a tulip.
Pours a nice medium straw color, very hazy and on the bight side. One finger of bubbly head.
Aromas are mellow lemon and citrus...a hint of melon.
Flavors are nice...not very complex...a lot of lemon, not sour...some mellow hoppiness.
Mouthfeel was good.
Overall, nice beer from Foam. Not as complex or deep as others Ive had from them.

Poured out hazy, as expected. The head was foam-y and white. The smell of the beer was generously hopped and punched you in the face upon opening the can. The taste is very citrusy with some creamy sweet maltyness going on in there too. The feel is medium bodied. Overall it's a very nice beer, really glad I got to try it.

16oz can from the Saturday, 8/4/18 release that I stumbled upon having been in Burlington that day. Drunk from an Imperial pint glass.

Dense haze that I refer to as the creamsicle look. The light airy head is practically all bubbles wrapped in white. The 1F 's worth dropped to a film in the blink of an eye, It hung around and left no lacing at all.

It smells like a screwdriver or other citrus based mixed drink. Sure, there are other fruit aromas like grapefruit rind and pineapple, some sawdust malt, even. But its core is that of a mixer.

Like a glass of juice with a bit of alcohol.

Juicy sweet with a dose of hop bitterness.

More like a "malted juice beverage" than a beer - for me anyway.

Thanks goes out to larryi86 for this brew.

A: poured into a tulip glass to a very hazy light yellow topped by a dense finger of white head which fades quickly to a collar around the edge of the glass with minimal lacing
S: Smells of citrus and tropical fruits with a hint of pineapple.
T: Taste is citrus and pineapple with other tropical fruits, citrus rind and pith come in strong as well as a slight grapefruit note comes in on the back end. Swallow is more citrus rind and grapefruit with some more pineapple and tropical fruits as things start to fade.
M: This beer has a moderate amount of body with carbonation that is effervescent and just slightly prickly while the beer has a refreshing finish.
O: Overall this beer is pretty awesome. Great flavors and complexity that really hits on what the haze craze is all about. Definitely worth a try if you can find it.

T - super pineapple-heavy. Still getting papaya in the taste as well, along with grapefruit and orange. Just a hint of alcohol. Pine follows, along with a very earthy/dirty middle. Moderate bitterness. No sweetness. Low booziness.

A- A hazy golden straw with a small white head.

O- A nice DIPA, worth seeking out, easy to drink.

Sample at Mikkeller Beer Celebration Copenhagen 2018, Blue Session. Aroma has sweet dextrin malt notes with fruity and dank hops. Taste is bittersweet, dank and a bit oniony with herbal bitterness on the finish.

The Foam Brewery guys are serious about making fantastic beer. The Shining is yet another world class IPA, definitely a beer to be had when in Burlington (no trip to Burlington is complete without at least one visit to Foam down on Lake Champlain). This beer is very turbid in appearance, as expected, has a wonderful hoppy aroma (but not as big as other great NE IPAs), and is just a fantastic double IPA. But that goes without saying, coming from Foam!

Pours a turbid yellow gold with minimal head.
Lots of peach and apricot on the nose.
Taste follows, fuzzy fruits but also getting a bit of lemon.
Medium bodied, could have a bit more carbonation. Dry finish invites another sip.
Overall a solid NEIPA, glad to have tried it and would gladly try it again.

Foam Brewers is my vote for best brewery of 2017.
A - Pours a very murky yellow orange with a white head.
S - Aroma is orange.
T - Flavor is orange apricot with no bitterness at all.
M -Average mouth feel and carbonation.
O - Wow - another outstanding beer.

only had a 6-8oz sample of this at the pavement release so cant really provide a detailed review ... but it was very soft and had some great texture. nice tropical fuzzy fruits and orange, well balanced all around but definitely joooseeee

Growlette share.
My portion was poured into a tulip.
The appearance was a dark milky orange creamy murkiness with a good sturdy finger and a half's worth of white foamy head that slid off at a mild pace. Lace didn't cling but slid fairly quick.
The aroma had some mango/pineapple sweetness dipping into some sweet lemongrass, and a mild creamy/semi-lactose like backbone.
The flavor leaned mildly towards the sweet fruity side and blended nicely with the creamy/lactose sort of character. Exceptionally smooth creamy sort of aftertaste with that fruit blend too.
The mouthfeel was extremely smooth barely noting any sort of bitterness. I'm guessing there's not IBU's at all in this. Carbonation seems very low too. ABV felt on par.
Overall, well, I really liked it for me, but I can see how a ton of old school DIPA fans are probably not going to like this one, it's definitely one of those New England IPA's/milkshake IPA sort of thing.