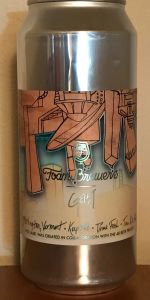 A: Pours a hazy yellow color with 2 fingers of head that fades down to a thin cap

S: Tropical fruit up front along with some citrus and floral hop notes. Some melon and fruit peel as well

T: Starts off with the tropical fruit and some dank hop notes and then picks up some citrus (both fruit and peel). Floral notes towards the back end. Moderately bitter. Finishes with lingering fruity notes

M: Medium bodied with moderate carbonation. On the juicy side

O: A solid IPA that is easy to drink. Fairly typical Foam-styled. Worth a shot

16 oz. can.
Canned 05/14/20.
Near vigorous pour (not quite straight down) yields an inch and a half white head over a very cloudy, straw-colored body with some lacing. Quite floral nose with traces of citrus and tropical fruit. After a few minutes the floral fades, letting the citrus take over and kick the tropical fruit to the curb. Taste is white grapefruit, ruby red grapefruit, and lemon while finishing with citrus rind and pith. Good feel and overall, an easy drinking 7% IPA while being a Hazebro's dream! Cheers to Foam!

Pours a hazy golden lemon topped with a few fingers of fluffy, white foam; decent retention, but plenty of thick lacing leaves a soapy impression smattered along the glass, as well as a lasting frothy collar.

Aroma is a slight bog of herbal tones hitting upfront, followed by more citrus leanings of tangerine, grapefruit pith, orange, and lemon peel; with some raw hops and hints of bready sweetness interspersed throughout.

Taste brings a general barrage of citrus, with plenty of rind and a building herbal bitterness coming to form; lemon zest, hop spice, and light peppercorn come in over time.

Mouthfeel shows a soft medium body with an equally soft carbonation; consistent along the palate, lightly juicy, and something reminiscent of tartness coming through as the finish builds. It's all very refreshing and easy going down.

An enjoyable but fairly straightforward NEIPA; plenty of expected citrus, and a unique lemony hint that adds to the overall profile, but nothing ultimately stands out enough to be memorable. Still, it's consistency is solid throughout, making it a pretty easy casual drinker.

A: Milky yellow tangerine - hazy, turbid - pours with a small white head, fades to virtually nothing, but retains a small collar, leaves some streaks of lacing

S: Loads of citrus, but not as much "Creamsicle" as some other Foam beers I've had - orange juice and notes of grapefruit - herbal and leafy hops, hop pellets - some soft tropical notes and something akin to berries - pale malts at the base

T: Oddly raw - orange and grapefruit juice, with some zest - herbal, leafy hops and hop pellets, very raw and almost harsh, astringent, but not really, as bitterness is on the low side - some dank notes - soft peach and apricot, tropical notes - pale malts at the base

I almost stopped reviewing this beer about halfway through the can because I am a bit perplexed by the overall flavor profile. Distopian Dream Girl does have many similarities with other Foam beers I've had, but it also tastes very raw and unfinished. I think the amount of hops used post-boil here might actually be on an absurd level.

Update, 4/25/19: I've let this can sit in my fridge for about a month now, and it's actually better than when I had it super-fresh. I'd still describe it as tasting "raw," but it has smoothed out a bit and has some more obvious lemon-lime flavors. Interesting. I'm leaving the scores unchanged, however.

A- A hazy golden straw with a two finger white head.

Taste: Bitter lemon/lime tones protrude with just a hint of sweet cookie malt flavors underneath; white wine grape flavors emerge, through the middle; modest bitterness in the back

Overall: Rather restrained for a NE IPA; would like it to have a juicier flavor profile