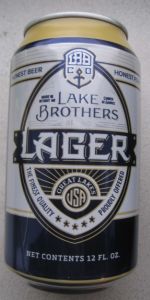 What a find. Had at The Gage, Chicago, apparently the Lake Bros. biggest proponents, on draft into a pint mug.

Golden amber lager with a beautiful but soon gone head, subtle hop and malt aroma, and then the perfect balance of light but serious malt and American noble-like hops.

This is a good lager. It reminds of Lake and Trail Copper Lager from New Holland, which I like slightly more but this is a great substitute/alternative.

Great lager flying under the radar. Great cloudy golden appearance with a finger of white foam. Smell is yeast and grainy, with the malt coming through on the finish bringing in earthy hops. Taste has honey rich malt, grainy barley, and the hops was bready and slightly metalic but in a good way. Slightly heavier but drinks smooth and chewy.

Malty is the best word to describe this beer, perfect sweet finish with little hops and complex malt flavors. They keep it simple enough where it is not anything that is overwhelming, definitely worthy of a summer lager.

I rarely rate lagers this highly. I'm impressed. A one brew shop and they do a great job with what they do. More like it.
I'm Looking at a crystal clear lager with a fluffy head that goes away (kind of like me every spring, the fluffy part.)
Smells are mostly malt with enough grassy hops in there. Tastes are genuinely the same... with the hops making their presence more known. Is what it is. Clean finish. Dry.
Uncharacteristic of me, I like this carbonation; cleanses the palate cleanly without after-taste.

OA: A sincere beer whose sincerity shows and shines. Old school made good. Good job..... And stick to your knitting.
The only thing to improve is the mistake that BA perpetuates by allowing this to be called a Vienna which is sweeter and softer and has fewer hops. Send The Bros a copy and I bet this gets corrected.

5/5/18 Gave a copy to a friend who grew up in Detroit. He loved this lager. I had it with Indian leftovers for lunch and it had just enough hops and bubbles and hops to cleanse the palate. A good pairing. There will be others. This lager is a winner.

I had two of these tonight, on tap at a local restaurant. (one was just not enough). What a discovery, it is an excellent lager. I immediately noticed how nice it looked, extremely clear golden amber color. Then the smell was right on, a lightly sweet malt with a touch of hops. Taste was very smooth and extremely clean. It has a light body and mouthfeel, very easy drinking. It is hard to imagine a nicer tasting lager.

I got a can of Lake Brothers Lager last week for $1.49 at The Lager Mill. I'm in the mood for a Lager today and I thought it would be a good chance give this brewery a try for the first time, so lets see how it goes. 2016 Vintage. Poured from a 12oz can into a pint can glass.

A- The can looks nice, it's got a classic look to it and it's a little eye catching. It poured a clear amber color which took on more a golden amber hue when held to the light with a over three fingers worth of fluffy and creamy off white head that died down to a thin ring that stayed till the end and it left some patchy rings of lacing behind. This is a very good looking Lager, it's one of the best I've seen.

S- The aroma starts out with a medium amount of sweetness with a doughy aroma being the first to show up and that leads into a little bit of fruity aromas that has a slight apple juice like aspect to it. Up next comes the malts which impart a grainy, sweet malt, biscuit, light cracker and pale malt like aromas. This beer had a pretty nice aroma, it's more complex than most Lagers.

T- The taste seems to be similar to the aroma and it starts off with a medium amount of sweetness with the same doughy aspect being the first to show up and it goes right into the malts which impart all the same aspects that they did in the aroma and they stick out a little more with a little more of a toasted malt aspect to it this time and maybe a little caramel malts. Up next comes that same slight fruity aspects that I got in the aroma, but this time no single fruit sticks out the most. On the finish comes the hops which impart a grassy and lightly herbal hops flavors with a higher amount of light bitterness with a lightly hoppy and malty aftertaste. This is a good tasting Lager, it's much more complex than most and the added hops give it some really nice balance.

M- Smooth, crisp, a little clean, on the thicker side of being light bodied with a higher amount of carbonation. The mouthfeel is goo and it's pretty true to style.

Overall I thought this was a good beer and a good example of a Lager, this beer proves that all lagers have to be very light and very clean, this one goes out of the norm and it makes for the Lager that I always wanted to see, one that has a little bit of complex malt aroma while still being on the clean side and having just enough hops and bitterness to have on balanced and tasty Lager. This beer had great drinkability, I could drink a few of these without getting tired of it. What I like the most about this beer is the balance and the complexity, that's what really sets this beer apart from all the other Lagers I've tried. What I like the least about this beer is nothing, there isn't anything tht shouldn't be there and there wasn't any aspect that I disliked. I would buy this beer again when looking for a good Lager and I would recommend it to anyone looking for the same. All in all I was happy with this beer and pretty impressed, I know nothing about this Brewery, it was easy to keep up with all the new brewerys in Michigan, but now that is not the case and more open every single month than they ever did, but this brewery is on my radar now, that's for sure. It's my new favorite Lager and it's a good example of the style and it made for a great first impression for this brewery. Good job guys, this is one tasty Lager and that's something I rarely get to say, keep up the great work and I'll be on the look out for more of your beers.

Picked this up in South Haven, MI last week. This is a great beer. It it listed here as a Vienna lager, but to me it is not as malty and bready as others. Very crisp and refreshing, like a richly flavored pilsner. A classic quencher with a refined finish. I enjoyed this beer immensely. A complete stunner in one of my favorite styles. The hop character is very refined and well rounded. The mouthfeel and carbonation is outstanding. There is a hint of sweetness and biscuit flavors. Every sip makes me want another. I cannot say enough about this beer. Try it!

In an industry that has become saturated with micro-brews, craft beers, and brewpubs, Lake Brothers Lager is a pretty refreshing new character on the scene. I heard about this via social media and was drawn in by the pretty cool regional branding. If you check out the Lake Brothers branding, you'll see they are trying to accomplish something different from the current trends in beer: it is not the eccentric, small scale hobbyist brew - they claim to be a return to the great American brew of the days of old, and they deliver.

I give this beer 5/5 across the board because I believe this lager is exactly what it claims to be. It's a lighter beer that goes down easy - the kind of beer that I feel like I could very easily drink a lot of without thinking much about it. It is not that heavy, super-hoppy beer, or IPA-esque brew, which is great - it means I can drink more than one before I start to feel full. Also, given how light it is I am a bit surprised with how smooth it is. A lesser, cheaper "light" beer has that bitter taste after every sip that almost makes a person cringe, but with Lake Brothers that bitterness never comes. It's great.

Finally, the price is right on point. I like the unique, crafty beers as much as the next guy, but it just isn't in my budget to spend $15 or more for a six pack so finding a quality beer at a reasonable price like Lake Brothers is really appealing to me. I will definitely be buying this again and bringing it with me to some lakes of my own.

Hadn't heard much about this one but was looking for a solid, regional lager to kick off Memorial Day Weekend. Can't say how impressed I am! Great malty sweetness and drinkability. Awesome, highly recommended lager.