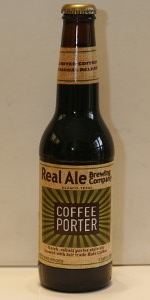 Born from owner Brad Farbstein’s homebrewing experiments in college — our porter is a rich, robust ale with a dry finish. Fresh, cold-brewed organic fair trade coffee courtesy of Katz Coffee in Houston, TX is added just prior to packaging. Our most popular seasonal release, it’s a whole new way to enjoy your coffee with breakfast, lunch or dinner.

A - Mahogany brown with a thin, light brown head. Foam fades to a thin ring with faint head left on top.

S - Coffee is certainly thr strongest aroma but is not powerful by any stretch. Roasted malts underlie the coffee. Just a bit of bitter chocolate as well.

T - Lightly roasted coffee beans up front with a nice roasted malt backing. Just a touch of bitter sweet chocolate as well. A hint of dark fruits comes through towards the end.

M/D - A touch on the thin side but very easy drinking. Bitterness lingers after the drink.

I got this from JJFoodie and boy, am I glad he lives near this brewery I'd never heard of until we started trading.

This brew pours out a deep, dark brown with some clarity in the light brown highlights. A light brown head sits stiffly at one finger for a long time and leaves moderate lacing on the glass.
The aroma is strongly of roasted malt with smooth roasted coffee with a note of bittersweet, caramel and a creamy sort of sweetness.
The flavor is not as much like drinking black coffee straight up as coffee with creamer; much of the harshness, acidity or astringency that marks some coffee brews are blessedly absent here, making this one smooth and very enjoyable, especially with the flavors of cocoa and caramel rounding it out and a roasted grains flavor underneath, finishing with a light hops flavor to really even it all out.
The body begins rich and smooth in a full body, not losing much of that character even in a dry finish.
This is a great coffee porter.

miikezombie sent this to me in a recent trade. Originally I had this on tap at The Ginger Man in Austin and loved it. Have been craving bottles ever since.

Prominent coffee beans in the aroma along with an almost equally intense semi-sweet chocolate. Slight earthiness.

More coffee in the flavor but this is more of a dark chocolate/espresso combination. Mocha-like but without overt sweetness. Bitterness is moderate and allows for a balanced flavor. Dry finish that leaves a dark toasted malt on the palette.

Medium in body with a moderate level of carbonation.

L: black, not much head ... in fact less than 1/4-inch of tan to dark tan head that barely exists; it's otherwise fine looking and might be clear -- super dark but clear, and you need a lot of light to see the clarity; purpleish old ale highlights

T: very solid in the coffee part, possibly a bit weak in the porter part -- it tastes a lot like Real Ale's Brewhouse Brown with some coffee thrown in; but the bit of hops in there works well, and there is a bit of a hop bite ... not as chocolately as other porters, but obvious dark malt notes throughout; burnt pecans; oak-wood ... smoky barbecue pit notes

O: i'm quite torn on this one. for sure it offers some nice coffee notes -- smell, taste, the bit of foam it does push up: all of these offer up plenty of ground coffee beans. it also is very drinkable and tastes and feels like a good lighter-weight style ... but herein begins the problem, which is simply: this isn't a porter. it's too pale ale/brown ale like in the feel and the dark-malt taste notes, which fall a bit short of that chunky sweet chocolate/dark chocolate stout/porter range.

if we found out Real Ale made this by tossing coffee into its Brewhouse Brown Ale, it wouldn't shock me. that doesn't ruin it for me; it's still quite good ... it just lacks the thickness of a good porter.

smell is thin hints of watered down old coffee grounds. decent smell. nothing crazy but nice. as it warms it reminds me of an english brown. slightly nutty wih some sweetness. almost a candied walnuts.

taste is very thin. watery coffee dominates the mouth. nutty finish. good not great. alright to drink but I dont think I would visit again

Pours a 1 finger off white head. Body is a very dark brown, almost black with some white floaties. Head retention and lacing were above average

Smell is of roasted malt, some sweet chocolate, and slight coffee. There is also abit of copper metal in there. Hops aren't present, wish coffee had more presence

Taste is of roasted malt and burnt, bitter coffee. Dont know if the hops have any effect on the beer or if the bitterness is just coming from the coffee beans

Mouth feel is above average. Body was on the lighter side for a porter and well carbonated. Head didnt add much to the body which was disappointing.

Drink ability was good. A sessionable beer for a hot Texas day. I love coffee beers and wish that the coffee had more presence. Wouldnt be my first choice for a coffee beer but worth a try

Received as an extra in a trade (I believe with stopbarking) thanks!

Appearance: Pours a deep mahogany brown with a 1 finger cafe latte crown that shows little retention and some lace.

Mouthfeel: A touch thin but it only adds to the drinkability.

12 fl oz brown glass bottle with branded pry-off pressure cap and generally appealing vaguely '70s-esque label acquired at my local H-E-B grocery and served into an Avery stem-tulip in low altitude Austin, Texas. Reviewed live. Expectations are below average given the brewery. Reviewed as a porter for obvious reasons.

Pours a half-finger wide head of khaki colour. Disappointingly thin. Lacks creaminess and frothiness. Head retention is poor - it doesn't even last 30 seconds. No real lacing clings to the sides of the glass as the head recedes.

Overall, it's pretty basic for a porter. Far from unique or special. I'm pessimistic.

Sm: Dark malts, muted bland coffee, licorice/anise, and a pat of cinnamon/nutmeg. It's a pretty boring aroma for a porter - let alone a coffee porter.

There's very little going on here. It's an inoffensive aroma of average strength. I do like the light touches of burnt sugar and earthy coffee, but there's otherwise little of note here.

T: There's some coffee character with some earthiness and light bitterness, but it lacks a distinct roasty or creamy or otherwise noticeable taste that would set it apart. Generic dark malts. Light cream. A kiss of burnt sugar. Buried caramel. Brown sugar.

Overall, there just isn't much happening here. Shallow depth of flavour, below average intensity of flavour, average duration of flavour. Painfully simple and boring. Doesn't have any subtlety, nuance, or intricacy whatsoever. Has a loose cohesion, but it's far from gestalt. Decent balance I guess. Very underwhelming for a porter flavour profile overall. The coffee is a huge disappointment too.

No hop profile, alcohol, or yeast character comes through. There are no egregious off flavours.

Mf: It actually has some coarseness and dryness on the climax, which holds it back from the traditional smooth/wet feel of a porter. Medium-bodied, with mild weight on the palate. I'd say overall presence on the palate is underwhelming. Lacks punch. It's decently carbonated. This texture just isn't good for the style. I even pick up on some mild astringency.

Not oily, gushed, hot, or boozy.

Dr: Drinkable, sure, but also rather bland. If you're going to brew a coffee porter, bring the coffee. This is neither a very good porter nor a very good coffee ale. I see no need to buy it again, and continue to be largely unimpressed with Real Ale's mainstream offerings. Not worth trying. Very mediocre. It's the kind of underwhelming beer you'd expect to find in a Sam Adams winter variety box.

I will say it gets better as it warms.

Real Ale Coffee Porter was one of the few regional beers I could find in Harlingen, TX, so I went for it.

It smells strongly of roasted coffee with some chocolate. The taste is basically coffee...quality, rich coffee. There are some burnt malt & chocolate edges to this, but still, this is essentially boozed coffee. Mouthfeel is medium-bodied, slightly acidic.

Overall, this is a drinkable porter. I'm glad I had it around to keep me awake while in Harlingen.

Coffee Porter from Real Ale Brewing Company
Beer rating: 87 out of 100 with 608 ratings