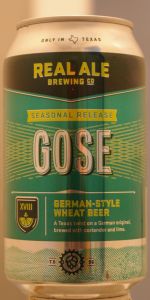 Notes: Gose is a rarely brewed regional specialty beer from Northern Germany. A slightly sour wheat beer, it's known for hints of coriander and a unique saltiness that is derived from the local water source. As a twist on the original, we add fresh lime juice to our version after fermentation. The result is a delightfully tart and refreshing beer to help you slug it out with even the hottest of Texas summers.
View: Beers | Place Reviews
Reviews: 22 | Ratings: 88 | Log in to view all ratings and sort
Reviews by ThaneMcC:

The perfect summer libation -
Pours a cloudy light gold with good carbonation and fine soapy effervescence.
Smells of lime and lighter tropical notes, some fruity esters, hint of biscuit and yeast.
Tastes is crisp with light sweet malt and transitions to lime/orange with a salty tinge and astringency that leaves the palate clean.
Mouthfeel is light to medium with light carbonation and clean finish.

Overall, this is my favorite session-able beer on a hot Texas day - thirst quenching and easily quaffable. IMHO, it takes the qualities of a good german wheat beer and the addition of the citrus and salt make for a tasty contrast.

A super refreshing gose that is pleasantly salty without overdoing it. Hazy yellow, smells like lemon/lime pie. Soft mouthfeel with a little tartness. The touch of sweet and tart of the lime makes this great with spicy food on hot days.

Brewed for the summer, but I'm drinking it in the winter. From the can, a cloudy golden hued beer produces a lace that drops flat quickly. Faint aromas of stone fruits, citrus zest, cracked pepper and some wheat bread. Active and creamy mouthfeel. Peaches. Lots of peaches, and a bit juicy.Real Ale’s seasonal is dry overall with a clean malt profile. A flash of sourness lifts the palate with a smack of lime and salt. Personally, I wouldn't have called this a Gose due to the dominating fruity peach character, but outside of that it's a decent brew if you're looking for liquid peaches.

Appearance: Pours a hazy deep golden color, wit a decent white head, which soon fades to oblivion. There are a few scattered patches of lacing, quite sparse, in all.

Aroma: Odd aroma of salted lime, with a bit of wheat malt.

Taste: The taste opens with tangy wheat malt and lime. AS the taste progresses, the saltiness intensifies. There is a late wag of tangy wheat ad lime rind.

Mouth feel: Smooth, soft, and quite full, with just a hint carbonation.

Presentation: Packaged in a standard twelve-ounce aluminum can, served in a New Belgium Brewing chalice.

I have a running trade with The Mighty JenRay who lives in Houston, TX. She only gets APAs and AIPAs from me, by request, but I get all sorts of CANs from her. This would be one such example, plus it is my approved pic. Not shown is the sudden pooching that took place behind and to the right of the tab! I got scared, so I put it in the reefer to chill, but I was still seeing increased pooching, plus the CAN was rock solid! Eeek.

From the CAN: "Only in Texas"; "Seasonal Release"; "A Texas twist on a German original, brewed with coriander and lime."; "German-Style Wheat Beer"; "Unfiltered - Unpasteurized".

The last may have been the culprit, so when I Crack!ed it open, even a gentle Glug was causing heavy foaming. I just let it run, watching as three-plus fingers of fizzy, bone-white head filled my glass and then dissipated into liquid. I was left with a glassful of cloudy Golden-Amber (SRM = > 5, < 7) beer. Nose smelled like sea spray, like standing on the forecastle (focsle) of a ship in heavy weather and just inhaling. Nothing else like it. Mouthfeel was a bit thin & watery, but very effervescent. The taste was stunning, literally. I have had gose before, so knew to expect a salty tartness, but the coriander and lime brought an all-new dimension to the flavor. Now, it was not just puckering, but it was making my eyes water! Phew. Finish was dry, tart, eminently refreshing, especially on a hot, humid day, but it just was not my bag. Next, I added a splash of grapefruit juice, a new trick taught to this old dog by a young bartender in return for a healthy tip. I pass it on to yinz free of charge. Add just a wee bit initially. Remember, you CAN always add more, but you CANnot subtract any. Even the tiniest amount cuts the tartness considerably. I like Simply Grapefruit myself, but you CAN also try Ocean Spray or even fresh-squeezed. Again, just a dab'll do ya, but you may find that you like more (or even less), but it is definitely worthy of experimentation.

Appearance: Pours a slightly hazy goldenstraw with a two finger head; as th ehead fades an ocasional spot is left behind

Smell: Lime and peach tones with hints of wheat bread, coriander and salt

Taste: Peach forward with the lime, coriander and a hint salt building, throught the middle; slightly sour, in the finish

Overall: A refreshing beer but not in the top flight for the style; lacks the salt tones of the best

Thanks, Texasfan549, for the opportunity

A: Hazy pale gold color with an airy head that dissipates quickly.
S: Tart lime aroma, a touch of pepperiness.
T: Very nice flavor, though more a lime-scented American wheat than a Gose. Low on the tart side, but acidic enough to be very refreshing. No bitterness to speak of, no coriander I can taste either, and just a very light touch of salt.
M: Light bodied, very easy drinking.
O: I admit I've drunk the heck out of this, this summer. It's become my favorite session beer, low in alcohol, light and tasty.

Also, my own gose ratings (1-5 scale of intensity, not a rating):
Sourness: 1
Saltiness: 2

Pours out a cloudy yellow. Head is white with little retention and no lacing. Carbonation is abundant.
The nose is very lemony with hints of wheat. Mostly lemon.
Taste is lemon sour and a bit salty with faint grains. Refreshing but one dimensional.
Mouthfeel is crisp and clean with nice carbonation.

Can in trade from blutt59, thanks for the opportunity! Slightly hazy deep yellow with a small bubbly white head that fades quickly. Smells like salty limeade. The flavor is lime and lemony with a hint of spice and lots of saline. I'm missing the lactic tartness that should be here. Decent tasting but not what I was expecting.

This is my favorite all time tubing central Texas rivers beer of all time. They go down so easy. You can get carried away very quickly with this one. Grab as many as you can when you see them because they are seasonal. My only complaint is this Gose makes you gassy. Dont know why but it does every time.