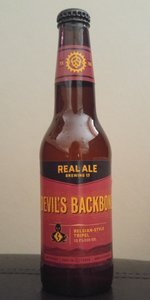 Notes: None
View: More Beers | Place Reviews
Recent ratings and reviews. | Log in to view more ratings + sorting options.
3.93 by nyrblue2 from New York on May 18, 2022

The attempt at fitting two twelve ounce cans' contents into a clear glass liter mug had to be paused. Perhaps it's because the cans were at room temperature, or maybe it's because of an abundance of carbonation, but a gentle pour still produced billowing white foam on top of the liquid. Often, wheat in the wort can provoke such a result. The head is nearly stark white, in contrast to the light and bright copper-amber color of the brew. The beer is almost translucent and many bubbles just keep appearing. As the foam receded, it left almost no lacing. Hops, yeast and alcohol can be detected by the nose, but the overall is somewhat vague, perhaps piney. The mouthfeel isn't as effervescent as all those bubbles had indicated. The hops are fairly bitter and in a piney sort of way. There's only a hint of a malty backbone to compete with the hops and alcohol burn. A significant amount of the sweetness comes from the alcohol and grain mixture. Then, at the finish, it's like the alcohol switches sides and with its burn, augments the bitterness of the hops. This emphasis on the alcohol isn't all negative, as it is an Imperial or Tripel IPA and that is the defining measure. There is very little yeast to its taste. Yes, it does have some transitional properties and that gives it a reasonable taste experience. Even with some wheat included, the body is at least mediocre, a compliment for many wheat infused beers. However, if this would be consumed simultaneously with something like The Alchemist's Crusher, which basically has the same ABV and doesn't shortchange the barley malt to include more wheat, this rating would drop precipitously. This is a tolerable, but not necessarily pleasant way to get buzzed by a nine plus percent ABV.

T: Citrus and spice hits front and center, heavy on the coriander and orange pith. There's a bready malt backbone beneath, and some fruity notes: pear, peach, and white grapes, with a hint of banana. Faint ghosts of the other spices from the nose play about the edges.

O: Not a bad tripel. I enjoyed it.

A little bit light on the feel. However, this is a refreshing ale.

I drink ales from November to March. Most of the ones I enjoy are heavy on the pallet. I like that.

But this, lighter tasting ale, is a good diversion.

As a stand-alone beer this is a decent option, not my go to as is, but with the right food it’s great. I did struggle to put numbers on it because it’s not a bad beer as is, but it isn’t exceptional either, HOWEVER, my wife an I always get this when we make wings and our Chile horseradish sauce at home, because it pairs so well. It’s good with Tex-mex, Mexican food etc, but when paired with horseradish in particular everything changes, it becomes so different. The mouthfeel changes, it gets sweeter and gains a chocolaty flavor that is absurdly tasty. I don’t know for certain it’s the horseradish, but we’ve had it with other hot sauces and other foods, and it’s only when we have it with the specific wing sauce. If anyone is curious we use a decent amount (6-10) of habanero, a lot of garlic and 6-8 ish oz of extra hot horseradish (next time we plan to use home-prepped), along with a bit of vinegar, butter etc as a regular wing sauce.

Simply put, I would 100% recommend with the right food, and it’s not bad as a stand-alone beer.

A: very slight haze; medium gold in color; 1 finger white head that receded quickly to a splotchy cap; no lacing;

S: bread and lemon with coriander in the background;

T: follows the nose for a brief second, then it's all coriander through the finish; a touch sweet in the middle; mild bitterness at the end;

O: for me, it needs more balance in the flavor and less sweetness;

12 oz. Bottle poured into ale glass
Look: Two finger creamy head, light gold color, little lacing, heavy carbonation.
Smell: Sweet, almost fruity, tough of clove
Taste: First impression is butter, followed by mild spiciness then light bitterness sneaks up in aftertaste.
Feel: Lays there, not much carbonation coming through.
Overall: This is my first time with this style. Drinkable with heavy food or alone. Chilled better than room temp.
I would try other brands of this style.

Pours a golden color from a 12 ounce bottle Best By date Jul 19 2021. Loads of carbonation but not much head. Great sweet aroma of fruits and maybe a hint of banana. Great taste. Very smooth and not too sweet Tripel. very drinkable beer.

Very nice effort. Not Fin du Monde, but true to style and a bargain for the price. An aggressive pour into a Duvel tulip glass yields a Duvel-like head and helps to release the aromas; all there with clove predominant. Nice mouthfeel and carbonation, lovely lacing. The more often I have it, the more impressed I am by it. I serve F du M to company but buy this when I’m feeling poor; always enjoy it.

L: Pours a pale yellow/light amber in color with a very thin white head.
S: Smells rich of banana, cloves all spice, very faint hint of straw.
T: Taste pretty much follows the nose, the banana is a bit overpowering for my taste.
F: Pretty high carbonation with a smooth finish.
O: The banana flavors/smells in this beer just aren't for me.

L - dark gold with high carb. Not think but not fizzy hard, somewhere in the middle.

T - banana and clove in your face, slightly bitter in the after taste

F - a bit thin, good try but I’m comparing this to the giants of the style

O - an EZ find at my local grocery store that gives me a solid drinkable Tripel. Has been a repeat buy for me.

12oz can poured into a chalice.

Appearance: Bright straw yellow bodied beer with 2 fingers of bone white head. In about 1 minute all the frothy head dissipates to a thin cap across the top of the beer.

Smell: Big expressive fruity & spicy yeast bouquet. Bready malt. You immediately know this is a Belgian style beer, the nose gives it away.

Mouthfeel: Medium bodied beer with moderate carbonation levels. Hefty and hardy while having a creamy effect. Its slightly boozy for 8.1%. Lightly drying finish that helps to lighten up the beer a little bit in combination with the creamy carbonation.

Overall: This is my first taste of any offerings from Real Ale. A really solid offering that pays tribute to the Belgian triple beer style.

I just moved into the area, so scoping out local offerings. There weren't many good local tripel where I was, so this is a nice find. It has a nice pour into a tulip glass. I think the taste is a little lacking for a tripel, but looking forward to enjoying it on a nice evening's relaxation.

Clear yellow at bottom murky gold at the top white fluffy head finger thick, smells of spices almost like spiced apples, good spice flavor almost on the borderline of to much spices though, medium to light body nice and carbony

Served on tap in a pint glass
Appearance – The beer pours a clear golden amber color with a one finger head of white foam. The head fades slowly over time to leave a little bit foamy lace on the sides of the glass.
Smell – The aroma of the brew is strongest of a bready aroma mixed with some nice caramel and spice smells of coriander and clove. Along with these smells comes a little bit of a grassy and hay smell as well as a touch of a candied sugar and yeast.
Taste – The taste begins with a rather bready taste that has a good hit of doughtiness as well as a moderate showing of harvest fruit and candied sugar as well as a touch of caramel and molasses. As the taste advances instead of drying out as most triples do, the flavors get even more robust with respect to the sweet and bready. Some more tastes of spice develop as the taste moved forward with lots of coriander and clove coming to the tongue. At the end a little bit of a yeast comes to the tongue and leaves one with a rather bready and malty triple taste to linger on the tongue.
Mouthfeel – The body of the brew was on the slightly thicker side for a triple with a carbonation level that was average to lower. For a triple of its abv, a little thinner body and higher carbonation may have been slightly better, but overall the feel was pretty decent and made for an easy sipping brew overall.
Overall - A rather decent triple overall. Normally I like something a little crisper in body, but for the rich and sweeter tastes of the brew the feel was decent and made for a rather slower but robust sipper overall.

Had poured from 12-oz. bottle, toted back from Texas, into goblet, but as explained below had to try again before rating, this time poured from like bottle into tulip.

Nice color, head minimal, appearance marred by lots of peppery floaties in first but not second bottle. Aroma wonderfully fruity, and on-style, as is flavor.

I like to drink 1 or 2 beers in a sitting and this one fits the bill perfectly.