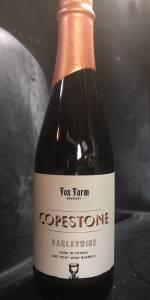 Notes: Our Cognac and Port Wine Barrel-Aged Barleywine. This beer began on the framework of an English Barleywine - all Maris Otter base malt and a combination of English crystal and other specialty malts. Dark Muscovado sugar from Mauritius was also added both prior to and during fermentation. Following fermentation and a brief period of conditioning we transferred to 20 year-old Otard Cognac puncheons and Offley Port barrels to rest for 9-months before blending and packaging in 500ml bottles.
View: Beers | Place Reviews
Reviews: 6 | Ratings: 21 | Log in to view all ratings and sort

This one pours a fairly dark brown color - much darker than the typical barleywine I've seen, with a fluffy head (surprisingly) and a little bit of lacing.

This is truly excellent. It's so smooth, with very little booziness. The barrels are well balanced - I don't think the cognac or port dominate the other at all. There's a killer brown sugar and sticky toffee thing, and lots of dark fruit. There's almost a feel like it's some sort of chocolate port truffle with caramel glaze - delicious.

This is thick, sticky, and chewy, with a surprisingly high level of drinkability. Like I said above - there's no booziness to this. It's clearly a beast - but it's an approachable beast.

This is really an excellent barleywine - it shows care and attention to detail. Fox Farm is a brewery I clearly need to keep my eye on.

Pours a deep brown a shade away from black with a decent head of tan foam materializing for only a short while before reducing to a thick collar; an occasional smattering of thick, webby lacing is also left behind, which although sparse, is appealing.

Mouthfeel shows a medium body with an inky, almost creamy, composition and an even carbonation going hand-in-hand with the body; this just glides, with an oaky and semi-sweet grit appearing as it finishes. For a bigger, boozy beer, this is about as good as it gets, as it reveals itself in full, alcohol and all, while maintaining all the subtleties it takes to make this just the right amount of effortlessness on the palate.

Big beer with plenty of flavor to share were it not for the intrusive barrel notes. Between stone fruits, baked apples, the bountiful barrel presence, and of course the typical near-perfect Fox Farm mouthfeel, I can’t help but feel this should have been more than it was, and that maybe its youth did it in. At least after this bottle, I’ve got to think some age would do this one wonders, and really allow the extent of the profile to shine through.

Sampling cellar temp bottle poured into a snifter. The beer pours a very dark mahogany color, almost stout like. A very dense creamy beige head of 1 cm foams up and fades to a thin surface layer and a clingy edge layer that remains throughout the sampling.
The aroma is rich and malty with a mix of molasses, chocolate, some toffee and a bit of burnt sugar. Also some dark fruit of raisin and prune and port wine, but no hops showing up anywhere. I also dont really get any booze here which is surprising since its 11%, but it is nice.
The first sip reveals a silky smooth textured body with fine and gentle carbonation. There is a sweet coating on my palate after each sip.
The flavor is roasty and dark chocolate, again some burnt sugar and molasses. I also get raisin and prunes on the finish, but the lingering flavor is also dark chocolate. Booze is absent and makes this beer dangerously drinkable.
Hops are absent and this beer is great. Im thinking about getting a few more bottles of this big malty b-wine! Nice one worth looking for!

Pours the color and clarity of cola with a frothy, khaki-colored head that dissipates into a consistent slick. Nose reveals sugar plums and molasses. Taste expresses cocoa, molasses, char and some notes of soy sauce. Mouthfeel is light-medium in body with an even carbonation - perhaps a touch thin for the style. Overall, a solid example of the style and quite drinkable; however, the barrel doesn't really come through.

500mL bottle purchased at the brewery. Batch 1 2018. Pours a dark brownish black with over an inch of frothy light brown head. Lots of lacing. The aroma is mostly the cognac and port along with some dark fruits, caramel, molasses, earth and brown sugar. The taste is mellower than expected at first. Caramel, brown sugar, raisins, chocolate, earth and maybe some roasted malts. The woodiness of the cognac comes out more towards the end along with a bit of the red grapes and port. Malty with some raisin bread and red wine towards the end. Caramel and molasses finish. Medium to heavy body with a thick, syrupy mouthfeel. Worth trying if you get the chance.

on tap at Fox Farm. DARK rich mahogany color w/ a pinky finger khaki head (head appears as if it were on nitro?). smell of dark fruits...figs...raisins... taste was odd. there's a TON of flavor. between the sweet cognac and dry port presence there's enough going on that makes each sip different....but there's this ever so tiny metallic sense that i get on the aftertaste. it's on the medium/full feel scale...syrupy lace chased by that tight foam head that lasted the whole pour. worth trying and look forward to revisiting hoping that metallic thing goes away. good on FF...not too many can pull off this style of brew.