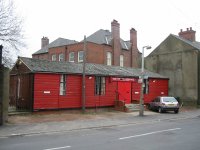 The Wakefield Labour Club is a legend. This is a true social club where strangers & locals are equally welcome.

To understand & appreciate the Red Shed, you have to understand its history. Formerly an old RAF wooden Hut (Shed), it is painted in the Labour Partys traditional color - Red, hence its nickname. It has been the base of the Wakefield Labour movement since 1966. Always a bastion of Socialist activity, it has been the meeting place of workers & played a big role in a whole range of industrial struggles during the Conservatives reign. As such, it has always been full of real life characters & well populated. Originally a keg only pub, Real Ale was first introduced in the 80s but really gained a grip in the early 90s when the local (Wakefield) branch of the Campaign for Real Ale (including my good self) convinced them to sell a Cask beer.

Now it sells 4 Real Ales; 1 Regular & 3 Guest Beers, always Firkins from small Independents. Warsteiner Lager, Guinness & Hoegaarden complete the drafts. A very interesting range of about 30 Belgium Beers complements the portfolio in this smallest of establishments. No food, but has snacks including real Pork Scratchings.

Dont be put off by the political links. The really great thing about this Club is that visitors will not be bombarded by Politics, far from it in fact. Strangely enough, many of the locals are now people of all political persuasions, they come here mainly to socialize & for a relaxing quiet drink. Whilst close to the Town Centre, it is sufficiently hidden to be a bit of a haven for some shoppers on Market Days.

This place is about 2 things. People & Beer. Oversize Glasses are used, & the prices are probably the best in Wakefield - the Belgium beers (often picked up during the annual Belgium Trip of the Wakefield Branch of CAMRA) are a real steal.

Shares very close links with Wakefield CAMRA, indeed it is our pick-up & dropoff point for the Annual Belgium Trip. It has won many, many awards throughout the years, including CAMRAs National Joint UK Club of the Year 2000.

I have spent many highly enjoyable nights in here; talking beer, politics, women, sports, loves and life - all of the important things  whilst sharing a great beer.

Unpretentious, Truly Unique & Totally Different. I guarantee that you will never have been anywhere like this to drink Real Ale & Belgium Beer.